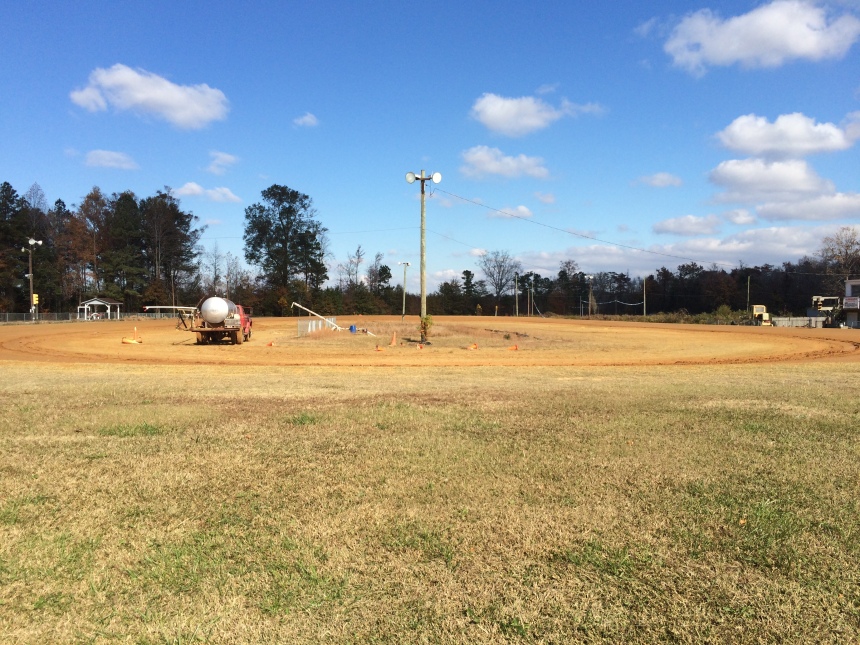 Elizabeth City, NC – What better way to wrap up a season than inviting all your members out for a backyard style cook out, a trophy presentation, and some good times out on the track. The Albemarle Kart Club Association was established back in 1978 for those looking to get their start in racing as well as those who have been racing. Located on the Dixieland Motor Speedway Complex, practically in the middle of nowhere, you will find the slightly banked, dirt oval go kart track that has been described to me as a drivers track.

Gathering together one final time before the winter months are upon us and racing takes a break, though if you were at the track yesterday you would have thought winter was already here! Instead of spending hard earned money on a huge banquet hall and sitting trough this long speech(s) from drivers who more than likely did not want to speak anyway. Instead President Doug Johnson decided to organize a “Fun day” for his members. “The idea is to get people who have never ridden a kart to come ride and have fun,” Johnson said about fun day. “Plus the lack of organized classes allows people to race together who wouldn’t normally have that chance like parent and child.”

Didn’t matter who you were, member, n00b, crew chief, or wife you were invited to come enjoy the festivities. Even yours truly was invited to hop in a kart and give her a shot thanks to Paul Maxon & Doug Warren for letting me use their equipment. Only four semi-organized race was on tap for the day – a champion’s race with an interesting twist, no literally they installed a bus stop on the back stretch AND THEN made them run the track backwards, a crew chief race (the race I ran in), a powder puff race, and the highlight of the day the Champ Karts.

END_OF_DOCUMENT_TOKEN_TO_BE_REPLACED

Posted on September 30, 2014 by Justin Kern Leave a comment

Hampton, VA – Langley Speedway officially closed out the 2014 season this past weekend with another eight division night. Champions were crowned in each division including the Enduro division which we did not cover. I have split these recaps again due to the fact there was so much going on throughout the day. It was a bitter-sweet moment when the final checkered flag waved knowing the season is official over.

Just like that the final 20 laps of the season for the Rhonda Clairborne Pro Wing Karts. Matt Leach was able to jump into the lead spot off of turn four coming to the checkered flag with a big push from Ryan Hudgins. The race would go caution free but not incident free as we had just one solo spin, his kart would remain under power and able to pull away.

It was very surprising how calm this race was given the fact these karts rely on the draft much like a super speedway in the cup series. The top nine cars ended up pulling away from Amanda Frye who was stuck in limbo pretty much – can’t catch the lead pack and has to wait for the karts behind her.

It was pretty much “smooth” sailing for the rest of the way, minus the one kart spin and the mix up in the back of the pack.

Even though Charlie-Ray Lorah came across the stripe in the third position it was enough to lock up his second Pro Wing champ kart title here at Langley Speedway.

END_OF_DOCUMENT_TOKEN_TO_BE_REPLACED

Amanda Frye is not the kind of girl who sits in the stands and freaks out when “her man” gets into a wreck on the track, she doesn’t even root for “her man” when they are on the track. That is because this girl is the one out on the track, the one behind the wheel, chasing down the boys and trying to make a name for her self. I actually meet Amanda quite a few years back when I worked at an indoor go karting place called American Indoor Karting. She was one of the few juniors that would come in and we wouldn’t really have to worry about her leaving scuff marks on the wall, or jumping over tire barriers. Most kids her age were there for birthday parties and for fun, she was there to race!
END_OF_DOCUMENT_TOKEN_TO_BE_REPLACED