Posted on October 24, 2015 by Justin Kern Leave a comment

Field lined up prior to the start of last year’s Halloween Spooktacular. (Photo credit: Andy Marquis/RACE22.com)

LUCAMA, NC – Limited Late Model racing will be the highlight of the Halloween Spooktacular at Southern National Motorsports Park on Saturday afternoon with a strong field of over 20 cars chasing victory and the possibility of winning $2,700.

The Limited Late Model field consists of championship drivers, old and new, as well as racers who find themselves in contention for race wins. Limited Late Model racing isn’t the only thing on the card for Saturday. A strong field of U-CARs, Legends cars and Bandoleros are all set to converge on the 4/10-mile oval in Lucama, North Carolina and a 10 lap all-female Powder Puff Shootout will leave plenty of people with a lifetime of memories.

Goldsboro, North Carolina’s Clay Jones has not been as active on the Limited Late Model scene this season as he has been in the past. The veteran racer has been focusing on Super Late Model racing, but, when he has raced in his blue and black no. 15 car, he’s every bit the threat he has always been. Jones has recorded victories this season at Wake County Speedway in Raleigh, North Carolina and at Carteret County Speedway in Swansboro, North Carolina. Now, in his first Southern National appearance of the year in a Late Model, he expects to bring home a win.

Moody Getting Back on Track

Wertz Hoping to Make a Mark

Two-time Langley Speedway track champion and popular veteran Mark Wertz is one of the more than 20 drivers who will be competing on Saturday. Wertz is making his first Southern National appearance since the 2013 Thanksgiving All-Star Classic and he comes in with momentum on his side after snapping a five year winless streak earlier this year out at Langley Speedway in Hampton, Virginia.

END_OF_DOCUMENT_TOKEN_TO_BE_REPLACED 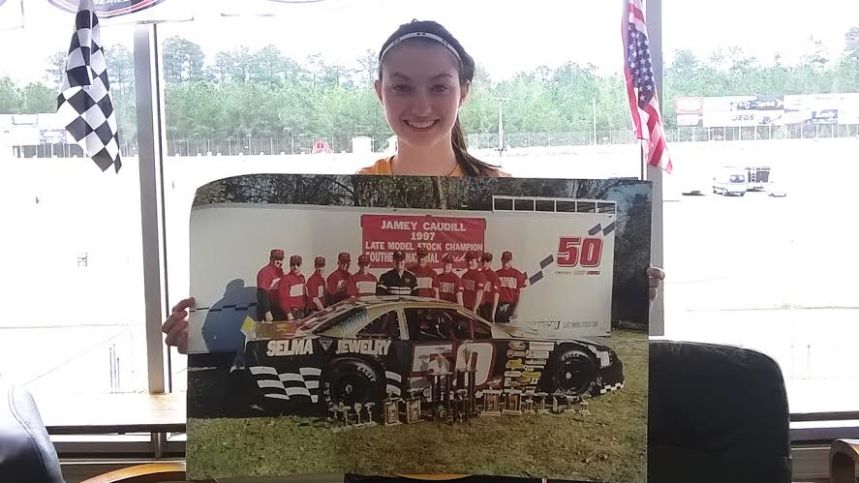 LUCAMA, NC – Jerry Moody, who is being honored at Southern National Motorsports Park in Lucama, North Carolina on Sunday, touched a lot of lives, none more so than Haley Moody.

Haley Moody, 20, from Kinston, North Carolina, is the daughter of the late Jerry Moody, who passed away on November 24, 2013.  For Haley, a win in Sunday’s race would mean the world.  Last season, she won the Limited Late Model division championship at Southern National Motorsports Park – a track her father won many races and championships at as a car owner.

“I think it’s pretty cool that they have it here because this is where he started and everybody that has ran his car has ran here,” Moody said.  “I basically started here myself and I won the championship last year and it’s pretty cool.  He would love it.  I’m pretty sure that he’s going to be looking down and be happy and I think he’ll be excited.  I really want to win that race.”

Despite the loss of her father, Moody raced into the pages of history in 2014.  Her championship was the first of any kind for a female Late Model racer in the region where NASCAR Late Model Stock Car racing is most predominant.  Along with that, Moody also won the NASCAR Diverse Driver Award which she accepted at the Daytona International Speedway on February 20, 2015.

END_OF_DOCUMENT_TOKEN_TO_BE_REPLACED

Posted on February 4, 2015 by Justin Kern Leave a comment 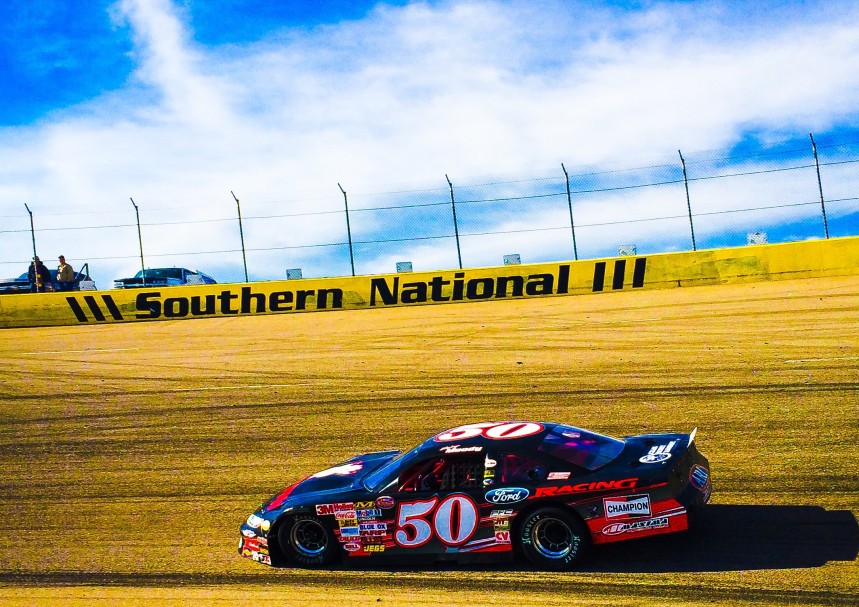 Kinston, NC – The accomplishments keep pouring in for the 19-year-old Limited Late Model driver. Just a few short months ago Moody was crowned track champion in Southern National Motorsports Park Limited Late Model division. Now she has something else to add to her already growing resume as she has been chosen to receive the 2015 NASCAR Diverse Driver Award. Haley will be accepting this award down at Daytona International Speedway later on this month at the 8th Annual NASCAR Diversity Awards Luncheon.

This award is to recognize her on and off track performance as well as her contributions to encourage participation in NASCAR by other woman as well. This award does not come lightly as the 2014 winner is Daniel Suarez, who recently just signed with Joe Gibbs racing to run full-time in the Xfinity series come 2015. Just goes to show that no matter what level of competition you have to leave it all on the track because you never know who might be watching.

Moody is coming off a record-setting season for her self where she earned 16 Top 5’s – 23 Top 10’s – 3 victories all coming from Southern National – in her rookie season mind you! When talking with Haley this afternoon she expressed her excitement for being chosen for this award telling us that she knows this means a lot and she knows this is a big thing for her. Going forward into 2015 Moody told us she is looking forward to travel a little bit more, as well as looking to find herself in victory lane.

Posted on September 22, 2014 by Justin Kern Leave a comment

Robersonville, NC – (6/19/14) For once this season Mother Nature seemed like she was going to play nice for the Robersonville area and provided a 0% chance of any weather issues as the speedway entered its first championship weekend under the NASCAR Whelen All-American Series banner. Five divisions were on the card for Friday nights fight under the lights where for the first time drivers were crowned NASCAR champions. Most of the divisions points battles were all but decided even before the green flag waved over each race, all but the always exciting UCAR division.

David Wiggins entered the evening just two point’s (506) behind points leader Duane Walker (508). Due to the tracks points system Wiggins only needed to finish one spot ahead of Walker to take the championship home with him. 25 laps around the high banks of East Carolina Motor Speedway separated one of these two to the honor of a NASCAR champion. What made things just that much better was during their European style qualifying Wiggins set the fastest time earning the pole position with Walker lining up to his outside. When the green flag finally waved over the field, Wiggins must have turned the turbo on and opened the nitrous bottles because he opened a good eight-car lead over Walker.

A scary moment in turn four for Mickey Connor with less than five laps to go, his machine went for a bit of a ruble dry cycle down into the infield. Have to give credit to the tracks officials and safety crews; both arrived on scene just moment after the car landed on all fours. Connor was able to exit the car under his own power, and no injuries were reported. Once clean up was complete and the field returned to green flag condition newcomer, well newcomer to me David Wall, got an incredible restart and took his machine to the front. The hard charging Wall was not able to mount a large enough charge for the lead but was able to take second place. With the dominant win from Wiggins and a third place finish from Walker, David Wiggins brought home the championship with a two-point switch.

READ THE REST OF THIS STORY

Posted on September 13, 2014 by Justin Kern Leave a comment

This week we stay in the Limited Late Model division, as well as in the state of North Carolina and catch up with current Southern National Motorsports Park LLM points leader Haley Moody. I want to give you a closer experience with this young driver than you have had before. Come on in and get to know this young lady who in my opinion is on her way to making a huge name for herself down in Carolina.

“My Dad always had a car so I basically grew up around it,” Moody said while speaking on what sparked her interest in the sport. “I was always at the track with him whether it was in the pits or the stands.” Maybe she wanted to keep it in the family or just maybe it was actually in her blood, but ever since Haley Moody was little she knew she wanted to strap into a race car. At the ripe ole’ age of 15, Moody made her racing debut in 2010 in the 4-Cylinder division at Coastal Plains Raceway in Jacksonville, North Carolina. “The first race I drove in I won!” Haley would go on an capture two more wins that rookie season for a total of three while finishing the rest of the races on the podium… at the age of 15! She was winning racing that she could barely drive her self to!

In 2011 I raced street at Coastal Plains and had a successful year,” explained Moody. “In 2012, I started racing Limited Late models at Coastal Plains and I ran a few races at Southern National Motorsports Park in Kenly, NC.” Her first ever race in a Limited Late Model came at Coastal Plains while the South East Limited Late Model series (SELLM) was in town, Moody would take home a very respectful 4th place finish in my book! Haley would make another move up the ladder so to say in 2013 by running a full season in the charger division at the high back oval that is Southern National Motorsports Park, “I finished the season with 2 wins, 2nd in points, and driver of the year!”

There are a few questions that I like to ask every driver we talk to simply because sometimes its always nice to “toot your own horn sometimes,” something my mother would always say followed by a stern reminder that there is a different between bragging and confidence. “My biggest accomplishment would probably have to be my limited late model win at Myrtle Beach,” Moody said when we asked her to name us a few. “That would be the last race my dad would see because he passed away 24 hours later with lung cancer.” Not only that but she was the first female to sit on the pole and win a race at Myrtle Beach Speedway. To me sounded like that weekend was planned a little bit ahead of time if you get what I mean! “I’ve always looked up to my Dad. He always knew what to tell me even though he didn’t race.”

To some Hayley Moody is your average young adult growing up in this world trying to make something of her self, to others she’s that hero other young ladies look up to and maybe even want to try and be one day. Make sure to check out the interview bellow and get to know a little more about this talented young lady.

Hayley is currently holding on to a 38 point lead over Dillon Spain after a disqualification was over turned by track officials with just three races left in the season. If you would live to see her run her final two points race of the season head out to Southern National Motorsports Park tonight (9/13)! Gates will open at 2:00 PM, Qualifying at 5:00 PM, Racing to start at 7:00!