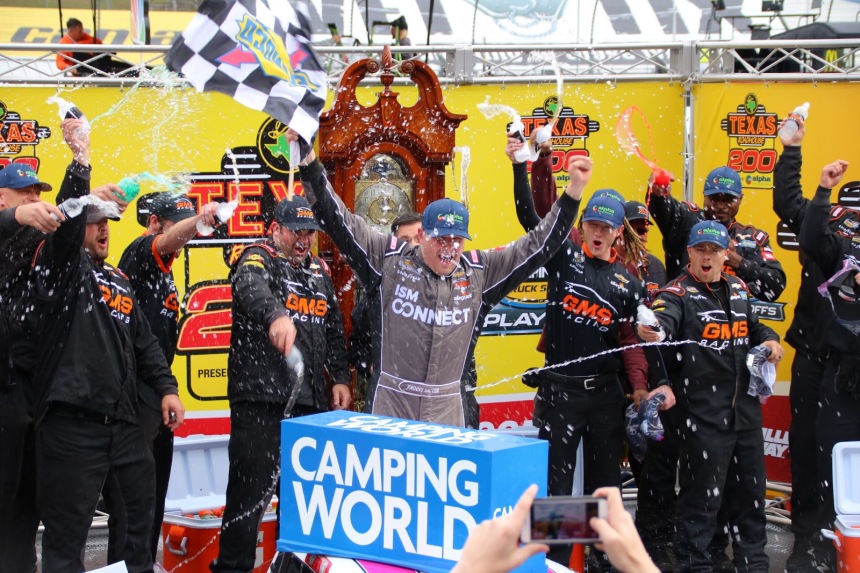 MARTINSVILLE, Va. –  Johnny Sauter knew that Martinsville Speedway could be a turning point on his path to battling for a second Camping World Truck Series championship this fall.

Sauter won Saturday’s Texas Roadhouse 200 Presented By Alpha Energy Solutions to clinch a spot in the series’ Championship 4 season finale at Homestead-Miami Speedway next month. In dominant fashion, the now four-time Martinsville winner picked up two stage victories before besting Myatt Snider on a late-race restart secure his sixth win of the season.

“We’re going to Homestead; racing for a championship. That’s what it’s all about,” Sauter said in Gatorade Victory Lane. “I’m so proud of these guys. Pit stops were awesome. Track position seems to be the name of the game here anymore, and I’ve just got to thank everybody. This is a big win.”

Enfinger ran into trouble on Lap 259 when he spun along with Chase Purdy, but managed to avoid any major damage. After pitting, the Fairhope, Alabama native was able to fight his way back into the Top-15 to finish the race.

“My wife always tells me that we have four kids, we need four clocks so when you tip over we can give each kid a clock,” Sauter said. “This is just a special deal.”

The weekend of action at Martinsville Speedway culminates on Sunday with the First Data 500 Monster Energy NASCAR Cup Series race. Tickets for the race may be purchased at the track ticket office on Sunday morning, over the phone at 877-RACETIX, or online at www.martinsvillespeedway.com

Posted on January 20, 2018 by Justin Kern Leave a comment 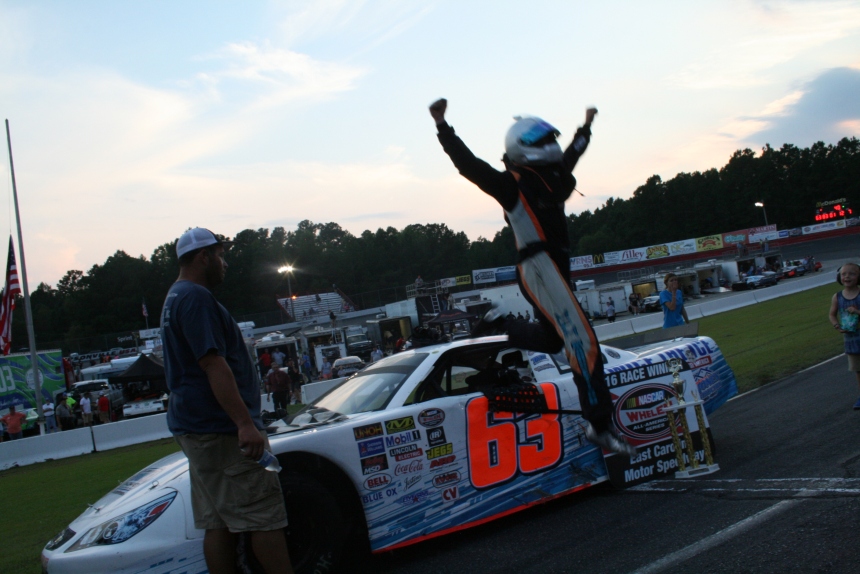 Tyler Matthews celebrates in victory lane at East Carolina on a Sunday after noon in September 2016. (Justin Kern/TheWeeklyRacer.com)

It was announced earlier today that Richlands, North Carolina native and 2016 North Carolina state Late Model Champion, Tyler Matthews, will be making his Camping World Truck Series debut later this year in the No. 99 truck for MDM Motorsports at Martinsville Speedway. Matthews, who currently competes in the NASCAR Whelen All-American Series Late Model Stock series, earned Rookie of the Year honors for North Carolina in 2015. He continued his rise through the stock car ranks the following year after winning both the Southern National Late Model track championship, he also finished third in points at his home track of East Carolina Motor Speedway – all while working on his degree from East Carolina University.

2017 would bring Matthews even more success as we would go on to win seven races and collect nineteen top fives, twenty top tens all in twenty starts en route to yet another track championship, this time at Carteret County Speedway, Matthews found himself, however, in a rather precarious position coming into 2018 after his Late Model was destroyed following a wreck at Carteret.

“That is kind of how this whole thing got started,” Matthews said in an interview with The Weekly Racer. “We took a step back to see where we wanted to go from there. I do plan on running some of the bigger Late Model races. This is a great opportunity with a really good team.” Matthews told The Weekly Racer once we caught up with him. “I owe everything to my parents and the people behind the scenes getting this deal together. They have believed in me since day one and now it is up to me to get it done.”

The three-race deal will kick off later this year at Martinsville Speedway here in Virginia. The following two races are set for Iowa and Gateway Motorsports Park where Matthews should get approval to run some of the bigger tracks on the Camping World Truck Series schedule.

“We are approved for 5/8 tracks,” Matthews went on to explain. “After Martinsville, we will get approved for Iowa and after Gateway, we should be approved to run the bigger mile and a half’s. Once we get approved for those we plan to run a few more races during the second half of the year. This team has had a lot of success with several different drivers. So I feel good about of chances to run well out of the gate.”

Matthews will certainly have his hands full making the jump from a stock car to a heavier, more powerful race truck, however, Matthews is keeping himself focused and setting smart goals for himself as he takes on this next step in his racing career. We also asked Tyler if there was any added pressure coming into a program that Monster Energy Cup Series driver Bubba Wallace took to victory lane towards the end of the 2017 season.

“You always want to win,” Matthews said. However, I would be really happy with some consistent top ten runs and keeping my nose clean. I want to learn as much as I can. I would say more confident because you know the team and the equipment is capable of winning but there is definitely some high expectations there.”

To learn more and keep up with Tyler Matthews in 2018, make sure to follow him on his facebook page https://www.facebook.com/tyler.matthews.731572.

Posted on October 26, 2016 by Justin Kern Leave a comment

DAYTONA BEACH, Fla. (October 26, 2016) – In an announcement that will put an even brighter spotlight on the next generation of stars and bolster the identity of all three of its national series, NASCAR announced on Wednesday driver participation guidelines for the 2017 season. The new guidelines limit the number of events a premier series driver can race in the NASCAR XFINITY Series and NASCAR Camping World Truck Series.

Starting next season, premier series drivers with more than five years of full-time experience will be eligible to compete in a maximum of 10 races in the XFINITY Series and seven races in the NASCAR Camping World Truck Series.

“The updated guidelines will elevate the stature of our future stars, while also providing them the opportunity to compete against the best in professional motorsports,” said Jim Cassidy, NASCAR senior vice president of racing operations. “These updated guidelines are the result of a collaborative effort involving the entire industry, and will ultimately better showcase the emerging stars of NASCAR.”

Drivers with more than five years of full-time experience in the premier series still can run for an XFINITY Series or Camping World Truck Series championship, provided they have declared for championship points in the respective series.

Wednesday’s announcement signals the next step in NASCAR’s driver participation guideline evolution. Prior to the 2016 season, NASCAR announced that members of the 2015 Chase for the NASCAR Sprint Cup field would be ineligible to compete in the 2016 Championship Race in both the NASCAR XFINITY Series and NASCAR Camping World Truck Series. In 2011, NASCAR implemented a rule requiring drivers to select one of the three national series in which to collect championship points.

Posted on February 6, 2016 by Justin Kern Leave a comment

This will mark Sorenson’s first ever Truck Series start. The 30-year-old Peachtree City, Ga. native has competed at the NASCAR national level since 2004. He is a winner of four NASCAR Xfinity Series races and made 234 career starts in the NASCAR Sprint Cup Series.