South Boston, VA – Mother nature has shown her power yet again this summer. Granted the forecast never looked very good in the first place, she has claimed another race for us this season. This time it just happened to be race number one of the VA Triple Crown. The only time cars hit the track today was the hour long open test session earlier this afternoon.

Rain worked its way over the speedway around 3:00 PM just as the drivers meeting was wrapping up and we were getting ready to get ready for controlled practice. A quick shower and a very proactive clean up crew got the track dried in just a little over an hours time. Track and NASCAR officials went to “Plan B” so to speak, offering up a 30 minute practice session, followed by euro style qualifying, then about a 10-15 fan appreciation meet-and-greet on the front stretch with the hopes of a green flag at approx. 7:15 PM.

Mother Nature won yet again! Just as drivers and teams were pulling off the car covers the bottom dropped out the sky and this time in a big way! A little over an hour and a half rain shower put the final touches on the speedway. “With the amount of rain we received and how late the start of the race would be we had to call it,” were the word from officials. This race has been rescheduled for Saturday, August 29th – just about a month after what would have been the second leg of the Triple Crown, the Hampton Heat 200. To all the fans that have purchased tickets make sure you store them in a safe place as they will be honored on that date.

Louis White Picks Right Up Where He Left Off In 2014

Robersonville, NC – The Rumble in Robersonvile, Opening Night: Round 2, Saturday Night Short Track Racing, which ever name you pick, it sure was good to be back at the track with no rain in sight! Two weeks ago Mother Nature had to stick her ugly nose into the mix and cancel opening night, but maybe it was a sign, a way for more drivers to prepare their cars for battle. This time around however, only a 5% chance rain in the forecast all day, we were going racing!

The tale of the tape – figure that was fitting with the historic fight taking place as well – 14 (15 LMSC registered, one had to back out after practice due to medical reasons) would suit up and get into the high-banked ring that is known as East Carolina Motor Speedway! With $2,000 on the line for the winner it was pretty clear pretty early that we were going to have one hell of a race on our hands.

Two practice sessions were given to each division throughout the afternoon and finding his way to the top of that leader both times was the driver of the #7 H&L Logging machine, Louis White. However he did have some company, making just her second start at ECMS, 2014 Southern National LLM Champ Haley Moody was a able to wheel her machine to second, both times!

Those speeds seemed to transfer over to qualifying for the young lady as she held the pole position for some time. She was only “bested” by one other driver and that was ECMS veteran Thomas Burbage. Clicking off a time of 15.321 or 88.114 MPH, Burbage earned the right to call himself the pole sitter for the 100-lap feature later that evening. Things almost went south quickly, when crewmembers were jacking the car up after qualifying they noticed a decent size gash in the right rear tire. They flagged down an official who eventually gave them permission to make a tire change and still be able to keep is pole position.

END_OF_DOCUMENT_TOKEN_TO_BE_REPLACED 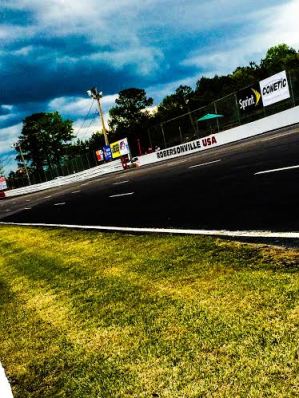 Robersonville, NC – She sure enough did not qualify on the pole but was there in the end to claim the first race of the year at the high bank 3/8 mi track. After a very active off season with track officials making the change to Saturday night racing, adopting a rule book to “merge” two division in hopes to cut cost and increase car counts, and adding three new divisions to the season, those same officials were forced to pull the plug this past weekend due to weather.

Most of the day the forecast was calling for no more than a 40% chance of showers, with a chance of a thunderstorm around the five o’clock hour. We thought we were in the clear after getting all three scheduled divisions qualifying in but ran into trouble during the “opening ceremonies.” A slow drizzle worked its way over the track dropping enough water to leave a shine on the speedway.

Immediately clean-up crews hit the track dragging tires behind them in an attempt to keep heat in the racing surface. An old trick that most local short tracks use due to the lack of jet dryers or now the Air Titan. With the help of half a dozen UCARS and Shawn Balluzzo’s modified we started to see the primary groove start to dry out – by this time it was 8pm.

All of those efforts would however get washed down the drain quite literally as another band of storms moved into the area, bringing larger drops at a heavier rate. By this time we had completely lost the track and officials made the call to cancel the evenings events.

McCaskill did send a statement during qualifying though. Setting a fast time of 15.296 to claim what would have been the pole – mind you he was two tenths faster than the second place car. Shelton McNair, Thomas Burbage, Ronald Brown, and Louis White would make up the rest of your starting five. Jimmy Humblet who was lighting fast all afternoon in practice laid a lap down to the tune of a 15.493, which was fast enough to claim the top spot in a seven-car field. Shawn Balluzzo, Mike Rudy, Chris Humblet, and Scotty Lawrence were those drivers finishing out the modified starting five!

For those fans in attendance the track has announced to hold onto your ticket/wrist band as they will be honored for entry in two weeks on May 2nd. Stay tuned to our Facebook/Twitter page as I will confirm with speedway officials to see if they plan on making any changes to the schedule.

Posted on April 8, 2015 by Justin Kern Leave a comment

Hampton, VA – Maybe not the way he wanted things to go down this past weekend but in the world of racing, a win is a win. Balluzzo had been at the top of the speed charts all day in practice along with previous Langley Speedway modified champion Robbie Babb. The two have had there fair share of close races and well why not keep that true on opening night.

When it was time to roll through qualifying Babb was able to claim the battle early, posting a quick time of 16.092 (89.485 mph) seconds around the tricky flat track. Balluzzo would have to settle for the second spot on the grid, clocking a time just seven hundredths of a second slower than Babb. Matt Slye – who we kicked off this season of the Driver Series with – found him self in the starting five P3, followed by Wayne Hartley & Jon Largena (R).

It was music to my hears when these bad boys fired their engines. Just something about the low rumble and the sleek look most of the teams have elected to go with on the bodies that really makes these cars look “mean.” Of course mean being in a good way!

When the green flag was displayed to the field Babb wasted no time what so ever claiming the lead as his own and started to put some distance between him and the pack. Well, with the expectation of Balluzzo. One thing for certain during this race the biggest lead Babb had over the 48 machine was no more than five cars and that’s being generous. The rest of the field on the other hand was not so lucky. The top two were on just a bad break away the saying “the leaders are in a new zip code” to a whole new meaning.

END_OF_DOCUMENT_TOKEN_TO_BE_REPLACED

Posted on April 4, 2015 by Justin Kern Leave a comment

Hampton, VA – The time is here, the time is now! A tried and true tradition in the Hampton Roads area in the spring – Langley Speedway opens its gates for crews, drivers, and fans a like. Tonight will mark the 65th year the tricky flat track has been open for business, and I probably don’t have to tell you this year is going to be big!

Yes this is Langley’s first official race of the 2015 NASCAR Whelen All-American Season but, this will be race number two on our Touring Series schedule (2015 Touring Series Schedule). Just like last year we will have you covered LIVE on our Twitter page. If you have not already, head on over (@theweeklyracer), click the follow button and hey while your there give us a little shout out – let us know where your from, who you root for, if your coming to the track – and we will make sure that YOU get retweeted! So, just like last year we will have your lap-by-lap coverage for both the Late Model Stock & Modified qualifying. We will also post your starting five for the Grandstocks, UCARS, Legends & Bandos.

If you didn’t know what to do with your Saturday night, don’t look any further! Teams have been preparing for months to get back to the track and the time has finally come. Not to mention it is starting to look like a star studded line-up, and not to mention we already have our first plot twist before the green flag was even brought out of its peaceful winter slumber!

Last year Matt Waltz – driver of the Waltz Engineered Sales #2 Chevy – racked up an impressive 12 wins, week in and week out battling with previous track champion Greg Edwards, who he eventually would lose the track championship to due to some miscommunication during the Hampton Heat. I am sure everyone in the stands were looking forward to these two going at it again, well its very sad to say we will not see that #2 car just yet. In dealing with a break issue Waltz Racing has declared the car is not at a competitive level, they will continue to work on her and hope for a quick return to the track Waltz Racing.

Looks like we will have quite the line up of LMSC drivers as it has been confirmed that 2014 Southern National Motorsports Park track champion Tommy Lemmons, Jr will be in attendance. He was here yesterday for some testing and told us he felt pretty decent, being it was the first time seeing the track. He will have more time to fine tune his machine to get ready for the difference in banking. It has also been rumored, and we will have to wait till we get to the track, that Deac McCaskill is also going to race tonight.

We will be going LIVE on Twitter this evening around 4:45 PM EDT. Make sure you tune in and even interact!