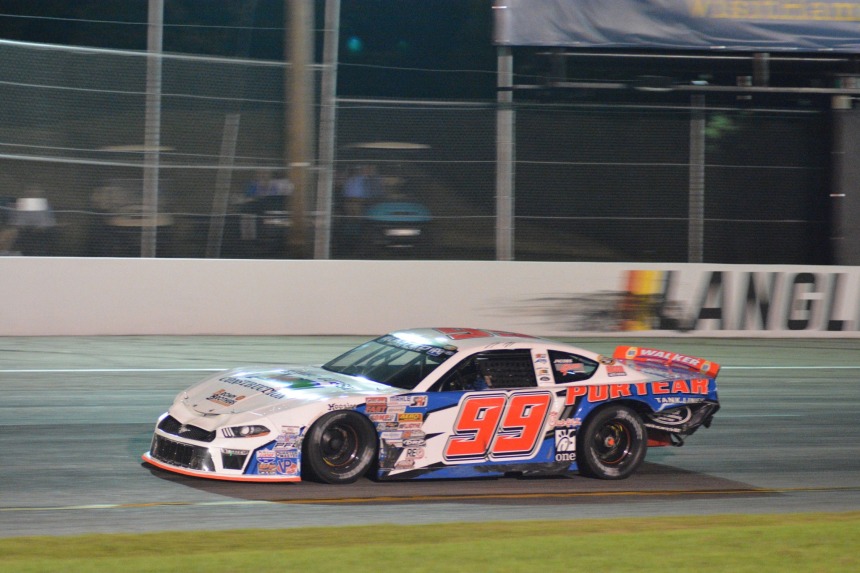 Hampton, VA – For the second year in a row, and the first time in 2020, the CARS Late Model Stock Car Tour made the trip to the famed .395-mile oval with 24 drivers ready to put on an incredible show for the few fans that were able to get tickets. Also making their first trip to Larry King Law’s Langley Speedway was the Dominion Racers, essentially a Limited Late Model running a small series between the two Virginia tracks. 6 cars made the trip this past weekend for their 35-lap feature event.

Corey Heim continued his good year with putting his 78 on the pole only by 4 one-thousandths of a second over Layne Riggs. Timothy Peters, Brandon Pierce, and Grayson Cullather rounded out the fast five. Defending race winner Deac McCaskill, did not show up so that meant we were in for a new winner.

Once the green flag flew, Heim cleared Riggs took the lead down the backstretch. The field quickly went single file. Peters took second away from Pierce but a few laps later, Pierce would take it right back. After starting 17th, Nolan Pope fell all the way to last I’m what seemed to be a race strategy for the long run. 10 laps in and the battles throughout the field began to heat up. Justin Johnson and Mini Tyrell got a little heated for the eighth position, while Bobby McCarty and Jared Fryar battled for sixth.

Riggs made his move for the lead on lap 14, but Heim held him off. Cullather, after running fifth, got stuck on the outside line and got shuffled back to 13th. Fryar and McCarty continued their battle but included Pierce this time to take away fourth and fifth. Trey Crews, making his Cars Tour debut, made his way around Pierce as well for seventh. The first caution of the race came out on lap 40 for a competition caution.

Once the green flag flew, the next caution came out on lap 42 for Cullather hitting turn three wall hard, collecting Justin Carroll as well ending both their nights. On the restart, Heim shot to the lead once again with Riggs falling in line to second. Peters still running third while Crews battled McCarty for fourth. McCarty gave Crews a slight door slam into turn one to clear Crews and take fourth. Teammates Peters and McCarty began a battle for third, resulting in McCarty taking the position.

After starting fourth, Pierce had fallen all the way to 17th with what looked to be handling issues. The first lead change came on lap 62 when Riggs cleated Heim into turn one but Heim did a massive slide job into turn two to take the lead right back. Riggs lost some momentum allowing McCarty to take second away. Lap 72 and McCarty had taken the lead from Heim. Lap 82 came up on the board and the caution came out for the second and final competition caution. On the restart, McCarty and Heim stayed door to door for two laps until Heim reclaimed the lead. Timothy Peters making his lone start in the Cars Tour pulled his number 12 machine to pit road with motor issues that ended his night.

The caution came out on lap 86 for Terry Carroll sliding through the backstretch grass. On the restart, Heim and McCarty went door to door once again until lap 88 when the caution flew again yet again for Crews spinning in turn one with a flat tire. Things began to heat up after the restart as Fryar moved up to third. Blake Stallings, after running midfield the entire race, made his way up to the fourth position. Riggs began to use the outside line to his advantage as he took third from Fryar. Connor Mosack, who had also been running midfield, had worked his way up to seventh. Lap 100 of 125 and things were getting exciting.

Riggs once again used the outside line to get around McCarty for second and had a clear track intro of him to chase down Heim. Lap 115 and Heim began to catch lap traffic. The lap traffic was just enough for Riggs to finally catch Heim with three laps to go. The white flag flew and Riggs was there. Going into turn three, the two made contact as Riggs chose the inside this time to shove Heim up the track and make the pass out of turn four to pick up his first victory of the 2020 season. The win would also end a two-year winless streak and creating the seventh winner in seven races on the tour.

Zach Lightfoot made his return to the track after dominating at Dominion all year. He put his machine on the pole by 2 one thousandths of a second over Landon Pemberton. Cole Bruce, Doug Warren, Andrew Condrey, and Elysia Potter rounded out the field. Once the green flag flew, Lightfoot didn’t look back. The field didn’t take long to go single file. Bruce took over second from Pemberton early on and went to work on Lightfoot. Lap 15 and Lightfoot had put a second lead on Bruce. Potter would pull her machine hot pit road with motor overheating issues. Zach Lightfoot would go on to lead all 35 laps and win the inaugural Virginia Racers race.