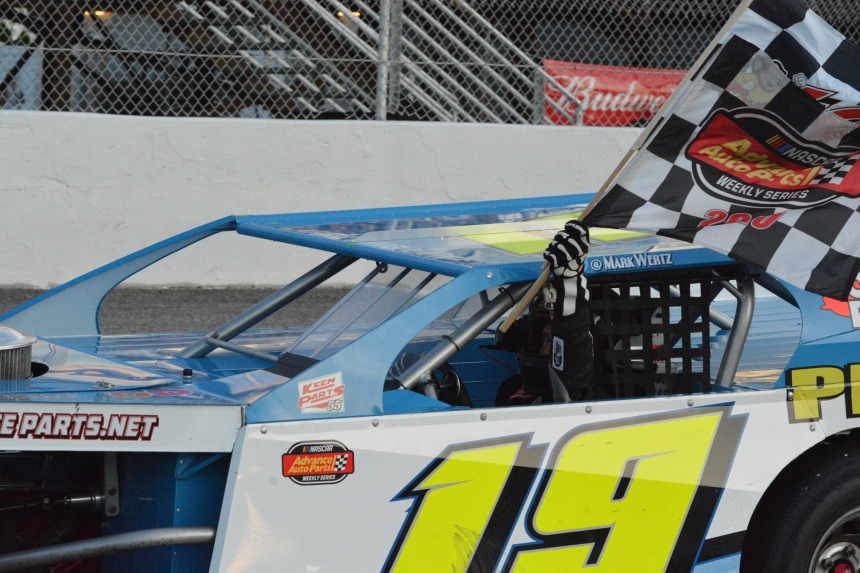 Hampton, VA – With a sold-out crowd for the second straight week, the Modifieds were back in action at Larry King Laws Langley Speedway with twin 30 lap features. Last races winner, Matt Carter, set the fastest time of the day in qualifying with a 16.123 (88.197 MPH) to set on the pole. That lap being four-tenths faster than the entire field proving he’d be the man to beat for the night. Mark Wertz, Adam Medek, Chase Burrow, and Chris Johnson rounded out the fast five. With the passing of Shawn Balluzzo two weeks ago, the speedway paid homage to the 11-time champion with the missing man formation during the pace laps. The cars lined up double file with two laps to green but left the first position open for Balluzzo. The scoreboard lit up with 48’s, and flagman Shane Snyder waived a checkered flag with a 48 printed on it.

The field went back normal and got ready for the green flag. The first caution didn’t take long as it came on lap 1 for Jamie Sample having problems. Next restart and Carter shot to the lead down the backstretch with Wertz right in line with him. Medek got stuck on the outside causing him to fall back to the fifth position. The second caution would come out this time for Medek going for a loop in turn one. During this caution period, leader Matt Carter’s machine lost power and came to a stop on track, ultimately ending his hopes of winning the first race. We would later learn transmission issues sidelined the defending race winner. This handed the lead over to Wertz. With 10 laps to go, Wertz had opened the lead up to half a straightaway over Michael Johnson. A late-race charge for Gdovic let him battle Michael for second. The checkered flag flew and Mark Wertz picked you his first Modified win on the season.

With the NASCAR mandated eight-car invert, Eric McPherson inherited the pole with Adam Medek, Chase Burrow, Brad Adams, and Chris Johnson the new starting five. Instead of starting eighth Wertz dropped to the rear of the field. Once the green flag was displayed, Medek jumped to the lead while McPherson fell to third. Burrow would also fall back to sixth after a rough start. The first caution came out for Matt Carter looping it around in turn one. Under caution, this time Chris Johnson had issues and pulled his machine to pit road ending his night.

On the ensuing restart a pileup happened in turn two involving McPherson, Burrow, Carter, Gdovic, and Shawn Adkins. Winner of the first race Wertz, merely missed the incident to continue his hopes of winning again. Gdovic and Adkins were able to continue while everyone else’s night was over. Medek took off with the lead once again on the restart. Michael Johnson slid up the track out of turn two slowing all the momentum Wertz had. Wertz made his way around Michael for second on lap 15 and set his sights on Medek.

With five laps to go, Medek was holding a lead that made it seem like he’d get the win, however, that lead would disappear as the caution lights came on for Adkins spinning in turn one. Wertz took the cone to lineup on Medeks outside for the restart. Wertz made the outside line work and cleared Medek going into turn two for the lead. Mark Wertz would hold on and double down and win the second 30 lap feature of the night for the Modifieds.

“Hey I am semi-retired so I love this one,” Wertz said in victory lane following an emotional moment with the Balluzzo family. “Sorry to see Matt broke but that was good racing. This one is for my buddy. Can’t thank Corvette Parts enough, Dunkin Donuts, Bubba Johnston for letting me run his car, Pro turf. My crew worked hard today, we knew we were kinda behind, [these] wins are getting hard to get so I’ll take one. I actually gotta thank the Hubbard family tonight. That last race I didn’t use up the right rear about halfway through that one. I was really having to eggshell the pedal and I just kept thinking Dixieland, Dixieland, Dixieland! Lift early, roll, and it really paid off!”