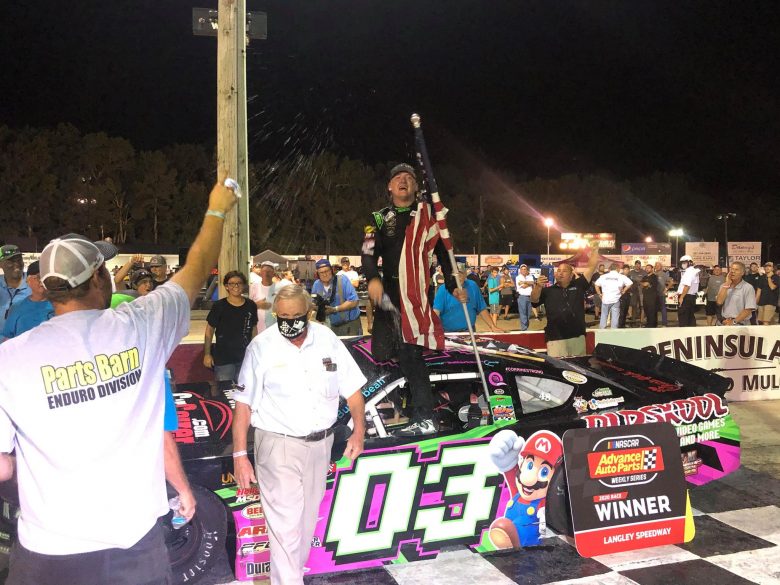 Hampton, VA – The much anticipated 12th annual Hampton Heat 200 was finally upon us at Larry King Law’s Langley Speedway. 26 of the best Late Model drivers on the east coast showed up, all going for that $10,000. With the heat beating most teams in practice, come qualifying though, teams found that extra tick they needed to put down some blistering laps. Corey Heim posted the fastest lap of the day with a 15.605 (91.125 MPH). Defending track champion Greg Edwards, Jared Fryar, Bobby McCarty, and Danny Edwards Jr. rounded out the fast five. Last year’s winner Connor Hall had some work to do to defend his title as he rolled off 13th.

As driver introduction wrapped up, the fans were on their feet waiting for the green flag. Heim shot off into the lead with a mirror full of Fryar. Danny wasted little time to get around Fryar, taking the lead from Heim on lap 5. Greg Edwards, after starting second, fell back drastically to tenth after getting stuck on the outside of a three-wide battle. After a hard-fought battle between Bobby McCarty and Grayson Cullather for fifth, McCarty’s race would come to an early end going into turn three after a flat tire and possible broken sway bar.

After starting 13th, Hall had eventually worked his way all the way up to third place after a restart where he utilized the cone. Chesapeakes own Brenden Queen, who actually fell towards the rear of the field during the meat of the race, had worked his way back into the top ten with 15 laps until halfway. At the halfway break, which this year was a 6 lap controlled caution period, Greg Edwards made a last-minute pit stop for a tire swap that would put him starting at the tail end of the field. Just before the halfway break as well, Peyton Sellers has worked his way from starting 17th, all the way up to 4th.

Heim took advantage of the cone after the halfway break and took the lead from Danny on lap 102 and set the pace for everyone else. A three-car battle with Heim, Edwards Jr., and Hall got underway for the majority of the 50 lap dash to lap 150. All cars would block the one behind them and never lose a position. The second guaranteed controlled caution period came with 150 laps on the board allowing everyone to make their pit stop for the final 50 lap dash. Greg Edwards, Mark Wertz, Rick Gdovic, and Timothy Peters all stayed out for track position.

Peters would jump to the lead with 50 to go while Wertz, Gdovic, and Edwards all stumbled through the field. Heim and Hall would make the pass on Peters for first and second on lap 154. Defending Late Model champion Greg Edwards season woes continued as he had some help in turn three to go for a spin. He ultimately parked his car for the night. With the outside line not working for many people, Hall took the cone every restart and made it stick perfectly. He never quite got the run out of the corners to clear Heim for the lead though.

A caution filled 50 lap final segment caused a chaotic yet exciting ending. With just 8 laps to go, on the restart, Heim didn’t get a good restart allowing Hall to get the jump on the outside and Queen to get to his inside. Going into turn one, all three made contact resulting in Hall going around and Heim hitting him in the left front, ending both driver’s hopes of taking home the victory. Queen would inherit the lead with a green-white-checkered finish on deck. Queen got the perfect start he wanted and went on to pick up his second career Langley Speedway victory and first career Hampton Heat 200 and for the second year in a row keeping the trophy in the Hampton Roads area.