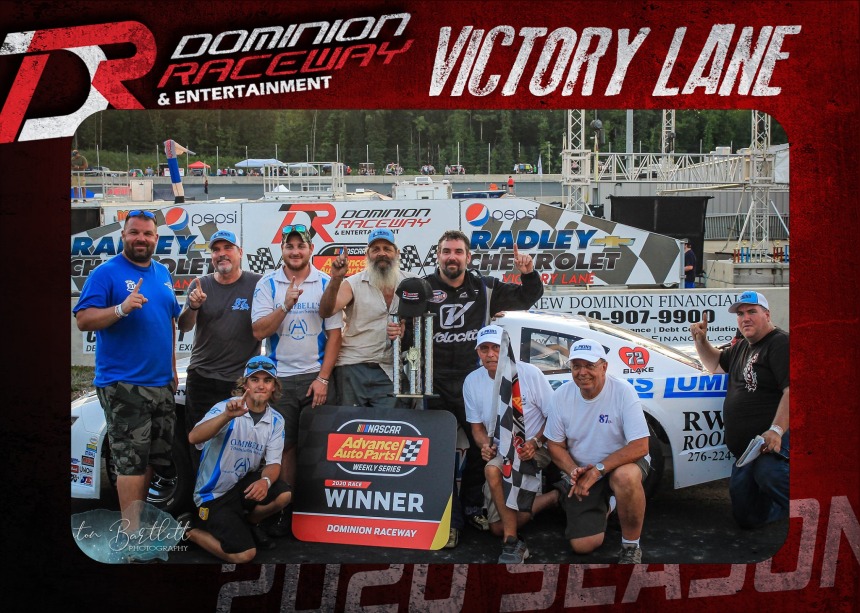 Thornburg, VA – Fans were finally welcomed back to Dominion Raceway Saturday night and to say they were treated to a treat is an understatement. The night was headlined by a pair of 60 lap features for the Late Model Stock Cars.

In the first 60-lapper, Mike Looney claimed his first LMSC victory at Dominion Raceway holding off a strong Peyton Sellers. This race was filled with cautions and hot tempers.

Tyler Hughes set fast time in qualifying with a lap of 15.477 seconds. After a 6-car redraw, Looney started on the pole. It didn’t take long for Peyton Sellers to catch Looney and thew two LMSC stars battled hard and clean for the last 50 laps. After multiple cautions, Sellers chose the cone and started on the outside. Sellers was extremely fast on the top but Looney battled hard on the bottom of the race track and was able to hold Sellers off in the end.

The excitement of the night came with 6 laps left in the first race when Tyler Hughes and Doug Barnes get together between turns 1 and 2. Barnes exited his car and jumped on the hood of Hughes’ car before crews broke up the skirmish. Both cars were done for the night.

In the second feature of the night for the LMSCs, because curfew was fast approaching, race officials reduced the race to 31 laps with caution laps counting. Davey Callihan led the field into turn 1 and the action heated up 3 rows back as the faster cars from the first race began their charge to the front. Sellers battled with teammate Daniel Silvestri. Sellers cleared him on lap 5 and set his sights on the leaders. Sellers took the lead on lap 13 and would prove too strong for anyone to mount a serious challenge.

The Virginia Racers Late Model Challenge took to the track for 35 laps in the first points race of this series that will also travel to Langley Speedway. Landon Pembelton set fast time with a lap of 16.423 seconds. After a 4 – car redraw, Logan Clark led the field to the green flag. Bruce jumped out to a big lead and was pulling away until the leaders caught lap traffic. Lap traffic was running door to door and presented a huge challenge for the leaders to navigate. Pembelton was using this to his advantage and was picking them off one by one. A late series of cautions came out setting up a green-white-checker finish. Pembelton uses the chrome horn to get Bruce out of the way and took the checkered flag. Bruce obviously was not happy with how that transpired and showed his displeasure after the race. Pembelton nevertheless, pulled into victory lane and takes the early point lead in this exciting series.