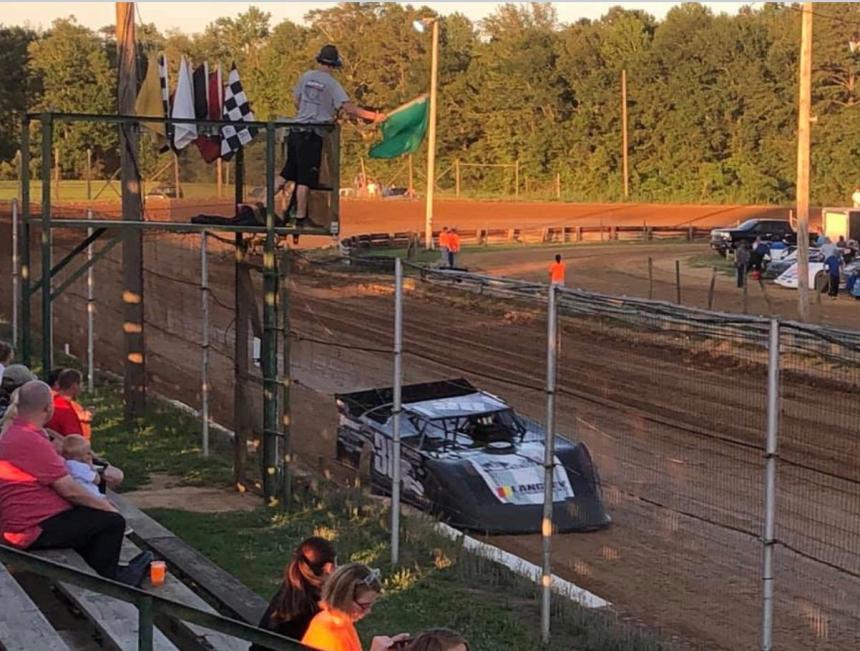 Elizabeth City, NC – Billy Hubbard dominated the 30-lap Budweiser Allstar Late Model event on Friday evening to garner his fourth victory of the season.  It was an emotional win for the 44-year old driver from Cobbs Creek, Virginia who recently lost his father, William Hubbard on June 5th.

“This one’s for him,” said Hubbard in victory lane following the race.  He was surrounded by team and family members who reflected on the night and on the life his father led.

Larry Jackson started the feature in third place and quickly moved into the runner up position to begin his attempt to overtake Hubbard.  While running in third place on lap seven, Knotts Island, North Carolina’s Tom Wilson experienced mechanical problems that would sideline the veteran front running racer whose average finish before this event was 2.6.

Jackson ultimately finished the event in second with Sherman Underwood securing the third and final podium finish.  It was Underwood’s best finish of the season.

Following his win, Hubbard moves from third to second in the points, swapping places with Wilson. Hubbard trails championship leader Larry Jackson by 12 markers headed into the next points-paying race on June 28th.

Mark Gonzales led flag to flag en route to his third win of the season in the Rapid Ron’s Racing Sportsman division.  The 27-year old Elizabeth City racer put his Chevrolet to the point and never looked back, holding off Troy Brickhouse who finished the 20-lap feature in the runner up position.  Mark Overman earned third place, his best finish of the season after taking nearly five years off from competition.

Seven yellow flags slowed the race due to spins, debris and a three-car incident on lap 16 that transpired on the front stretch involving Devin Weatherly, Nick Odell and Lee Waddell. Weatherly was involved in two other spins before that on laps 10 and 11.  In the first half of the race, Weatherly had his Chevrolet Camaro near the front of the field, hovering around third place.

Veteran racer Dennis Barnes steered his Chevrolet Monte Carlo to winner’s circle for the third time in 2019 in the Little Caesars Super Street division.  The Camden racer had to contend with another seasoned competitor in Allen Shiflett.  Shiflett started the 20-lap race on the pole position and quickly found himself in the clutches of Barnes, who started on the outside pole.  Shiflett would later credit his lack of winning performance to the tire setup compared to track conditions.

Following Barnes across the finish line was Justin Pruitt, who earned second and Shiflett claimed third.

With the win, Barnes broke the points tie over Pruitt and takes sole possession as the series championship leader by two markers headed into Friday night’s races.

It was the survival of the fittest for the Biggs Cadillac, Buick, GMC Stock Fours 15-lap feature event. The attrition rate was elevated as multiple drivers experienced mechanical issues and cut tires.  The most significant one occurred on lap five when points and race leader James Hissom, Jr.’s car began to smoke heavily while exiting turn two.  Immediately following that the vehicle erupted into flames on the backstretch as his engine expired, forcing the Moyock competitor to the garage and out of contention for the win.

Finally, on the eighth circuit, third place contender Chris Freemon cut a tire, dousing any hopes of a top finish.

In the end, Trevor Battoia of Elizabeth City was able to hold off Kolton Stevens to claim the win. It was Battoia’s first win since August 24thof last year and Steven’s best finish ever.  David Simmond’s, Jr. earned third place, also accomplishing a career best.

Despite a poor finish, Hissom, Jr. continues to lead the point standings, although at a narrower margin.

The host of Performance Racing Network’s At the Track, Lenny Batycki from Charlotte was on hand Friday evening to promote and cover the action at the raceway.  He featured the winners on his segment on SiriusXM NASCAR radio’s The Front Stretch with Pat Patterson Saturday morning.  PRN’s At the Track weekly radio show highlights personalities and stories from grassroots racing and can be found on broadcast radio stations, the free PRN app and iTunes.

Dixieland Speedway is northeastern North Carolina’s premier action track.  The 3/8-mile dirt oval has hosted exciting Friday night racing since 1983.  Long straightaways and tight turns lead to intense on-track action.  The clay track is 55 feet wide and turns one and two are banked at 12 degrees, while turns three and four are eight-degrees.  Race fans from all over the region have come to witness spectacular side by side racing through the years.  The family-friendly facility offers something for everyone as on-track action keeps fans on the edge of their seats all night long.  Refreshment and souvenir stands are on site.  Tickets for all events are available for purchase in person.  Don’t miss your chance to see why they call Dixieland, the track that started it all.  To learn more, visit dixielandspeedway.net or follow Dixieland Speedway on Facebook (Dixieland Speedway), Twitter (@DixielandSpdwy) and Instagram (@dixielandspeedway).  Information by phone, dial 252-771-5151.  Dixieland Speedway is located at 1520 Northside Road in Elizabeth City.