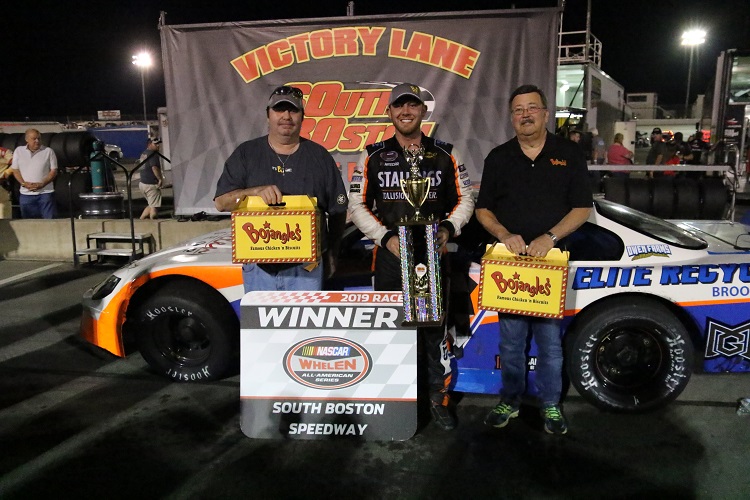 Crews, the outside pole starter, held off former NASCAR national champion Lee Pulliam of Alton, Virginia and Nick Sanchez of Miami, Florida in a 37-lap sprint to the finish following the race’s final caution period to capture his first win. His margin of victory was .748-second.

The Halifax, Virginia resident took the lead at the outset and held a lead of almost a quarter of a lap over Pulliam and Sanchez when a caution flag flew for an incident on lap 63. Pulliam and Sanchez gave Crews a hard run for a handful of laps after the restart, but Crews was able to gradually pull away as Pulliam and Sanchez engaged in a close side-by-side battle for second place, a battle Pulliam won by about two car lengths.

Austin Thaxton of South Boston, Virginia finished fourth and Mike Looney of Catawba, Virginia rounded out the top five finishers in the race that took just over an hour to complete.

Moss took the lead from Willis with three laps to go as they battled on the restart following the last of the race’s three caution periods and held off Willis to win by .415-second. Drew Dawson of Nathalie, Virginia finished third with Jason Myers of Hurt, Virginia and Brent Younger of South Boston, Virginia rounding out the top five finishers.

Willis started on the outside of the front row in the second race, took the lead from Myers on the second lap and drove to a .685-second win over Moss, who got around Myers to take second place on the next-to-last lap of the race.

Eric Winslow of Pelham, North Carolina, and Dawson rounded out the top five finishers in the nightcap.

Crews and Pickrel exchanged the lead three times in the opening race, with Crews taking the lead for good with eight laps to go to capture his third win of the season.

Pickrel started on the front row and led the entire way in the second race that was marred by a multi-car incident on the opening lap. Justin Dawson’s car was destroyed and Hupp’s car was totaled when it overturned on the front stretch. Neither driver was injured.

A good jump on the start allowed Pickrel to pull away from the field, and with no challenges, he sped to a three-second win over runner-up Jarrett Milam of Keeling, Virginia. Mayo finished third with Kenny Mills Jr. of Alton, Virginia, and Crews running out the top five finishers.

Josh Dawson of Halifax, Virginia scored his first career win Saturday night in the 15-lap Budweiser Hornets Division race. With the victory, Dawson became the third different winner in the four races run in the division thus far this season.

Next Race At South Boston Speedway

Admission is $10 for adults with children ages 12 and under admitted free with a paying adult.
For additional information about the NASCAR Late Model Twin 75s racing program or any other events at South Boston Speedway please visit the speedway’s website at www.southboston speedway.com or telephone the speedway at 434-572-4947 or 1-877-440-1540.