Posted on November 23, 2018 by Justin Kern Leave a comment 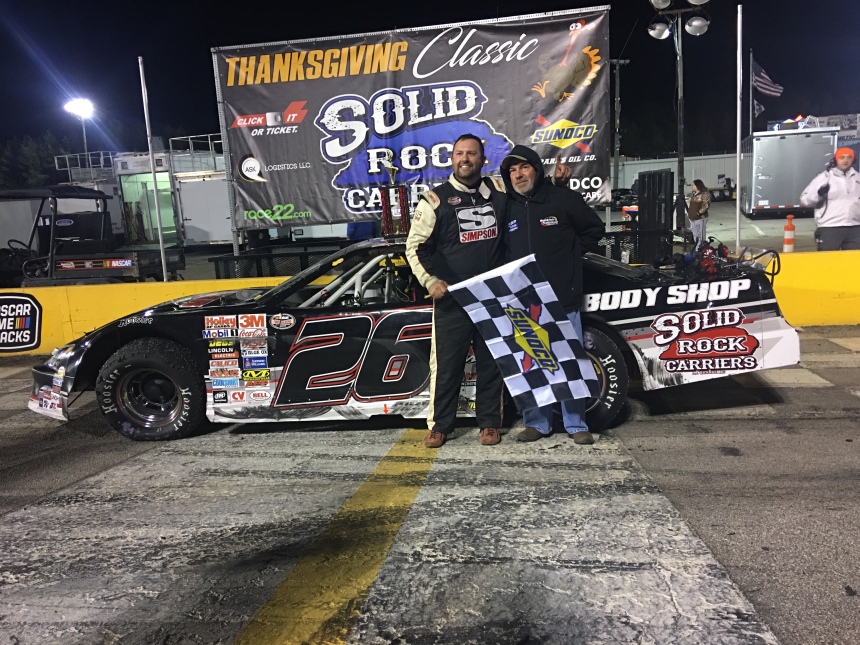 Lucama, NC –  Bradley McCaskill was the fastest of sixteen cars earlier in the evening during final Limited Late Model practice for the Friday portion of the Thanksgiving Classic. The grid was set by the fastest time in that final practice and McCaskill’s 15.830-second lap was enough to score him the pole. Mike Darne, filling in for last years Dash winner Mini Tyrell, qualified second while Brandon Clements, Karl Budzevski, and Stephen Jones rounded out the top five.

Darne, who is no rookie to Southern National, looked like he was going to take control of things early and use that outside line to his advantage. He was able to lead the first two laps before having to give the lead back to McCaskill. Darne would get hung out to dry on that top groove but ultimately would only fall back to third. Budzevski ultimately taking over the second spot and the pursuit for the lead.

The only caution would come on lap seventeen when the power plant under the hood of Louis Whites No. 7 would expire coming off turn two. It couldn’t come at a better time for Budzevski as he would be scored as the race leader when the caution car picked up the field. Track workers cleaned up the mess rather quickly and the race saw its first and only cone restart.

When the green flag was displayed Budzevski took sole possession of the race lead with McCaskill hot on his tracks for about two laps before falling back a handful of car lengths and ultimately losing the second spot to Darne with just under twenty laps to go in the feature. Try as they might it was ultimately Karl Budzevski taking home the checkered flag and the trophy.

Action picked up quickly in the evening opening Mod 4 15-lap feature when pole-sitter Kevin Jeffries went for a spin in turn two on the initial start. Randy Ayers also spinning to more than likely miss tearing up his car. This allowed the No. 63 of Dennis Capps to start from the pole position and boy did he not waste his shot.

When the green flag was displayed back to the field Capps jumped out to an early lead. All the while Jeffries worked his way back up through the field. With just a five-car field it did not take long and we saw a battle for the top spot with just three laps to go. Capps, however, was able to hold on for the victory.

Jeremy Bohne was the second driver of the evening to win their feature from the pole position. However, unlike the race before him, he was unable to lead every lap of the race. He was pretty darn close until a lap nineteen caution bunched the field up and allowed them to take the cone. Kornegay was the first to take the bait and would not only restart on the outside of Bohne but lead a couple laps before having to settle for second then eventually third.

The chargers will race once more on Sunday afternoon along with the Limited Late Models and the headlining Late Model Stock Cars.

Alek Andrecs started the trend of “lets win the race from the pole” in the 20-lap Bando feature when we went on to lead every single lap. Andrecs had got off to a great start but would have his lead erased after Riley Music spun out in turn two. The restart, however, seemed to be nothing for Alec as he held off two separate charges from Derrick.