Posted on November 2, 2018 by Justin Kern Leave a comment 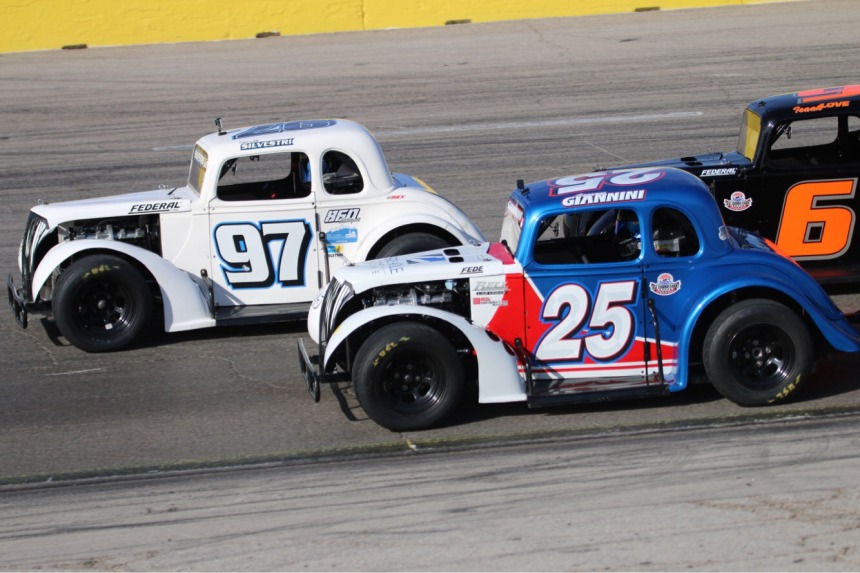 On a typical weekday morning Daniel Silvestri, a soon to be 16-year old Sophomore in high school in Fairfax, Virginia, is usually up early and getting ready to head out the door for another fun full day of classes. However, this last weekend his schedule was a little bit different as the young INEX Legends driver as he and his race team made the cross-country trek out to Las Vegas for the INEX Legends Nationals with the hopes of bringing an INEX Young Lions National Title back to Virginia.

Because of his efforts throughout the 2018 season, Silvestri followed up his Rookie of the Year performance and second place finish in the points standings at his home track of Southside Speedway – located in Midlothian, Virginia – by winning the track championship. Silvestri was also crowned the Virginia State Champion in the Young Lions division due to his efforts at both Southside and Langley Speedway.

Silvestri found himself entering the weekend tied with Isaak Love of North Carolina for the national points lead in the Young Lions division. Just three points behind them was Jake Matheson from New Hampshire. Because of the points structure used for US Legends Cars and how close the top three were in points, it would essentially come down to if Silvestri could finish ahead of the other two drivers.

The weekend was split into three days of racing where drivers would have a chance to earn a maximum 300 points. 100 points would be given to the fastest car in qualifying (then a one point difference for each position), 100 points given to the winner of their respective heat race (three points per position), and of course 100 points to the feature winner (three points spread per position).  Silvestri got off to a strong start qualifying third (earning 98 points) and winning his heat race (earning 100 points).

Because of his qualifying efforts and heat race win, he would start the feature from the third position. Silvestri got a great start making a pass for the lead early. He would go on to lead 28 out of the total 35 laps. However, Bullring Legends track champion Jaron Giannini would get by Silvestri with just two laps to go to score the race win. Matheson would also squeak by Silvestri in the closing laps to finish second and win the national title. Silvestri would ultimately finish the feature third in the feature and second in the national standings.

You would think after being so dominate all weekend, earning the points you needed, and having the national title slip through your hands there at the end, you would be furious. Silvestri, however, seemed to take the glass half full approach and chalked it up to an overall good weekend.

“It’s huge for me,” Silvestri explained even after missing the national title by only a few points.“I never expected to hop into a Legend [car] and be able to do so well in my first year. To be able to compete for a National Championship was a really cool experience for me. It gives me some confidence to know that I can compete with some of the best legends guys in the country and that I can drive one of the hardest cars to drive on ovals. There are people who have driven many different types of cars and they say that the legend cars are the hardest car to drive with its short wheelbase and weight to power ratio.”

Of course, the success that Silvestri had over the weekend and throughout the 2018 season was no solo adventure. Daniel was very thankful of his parents, team, and CJ from 860 Motorsports.

“We surrounded ourselves with good people,” Silvestri told The Weekly Racer. “The person we bought our first legend car from told us to talk to Scotty Edwards, past Legends racer at Southside Speedway, who taught me how to drive the Legend. He introduced us to CJ at 860 Motorsports. There are many other people that helped along the way but with that base, it helped me get better quicker. All the awards, wins, and championships were just the result. I couldn’t have gotten as far without those people helping me. It just clicked and we took off and I was able to win a few races my first season and I was a very strong competitor on the national circuit with 4 poles in 5 races at Winter Nationals back in February and was able to lead 28 of the 35 laps at the Asphalt Nationals and coming one position short of the championship.”

With 2018 all but in the rearview mirror, Silvestri and team will turn their attention towards next season where some pretty big changes could take place. Silvestri let The Weekly Racer know that they have some ideas on what and where they will be racing and that they are looking into the idea of possibly running a handful of Late Model Stock Car races throughout the Commonwealth.