Posted on September 4, 2018 by Justin Kern Leave a comment 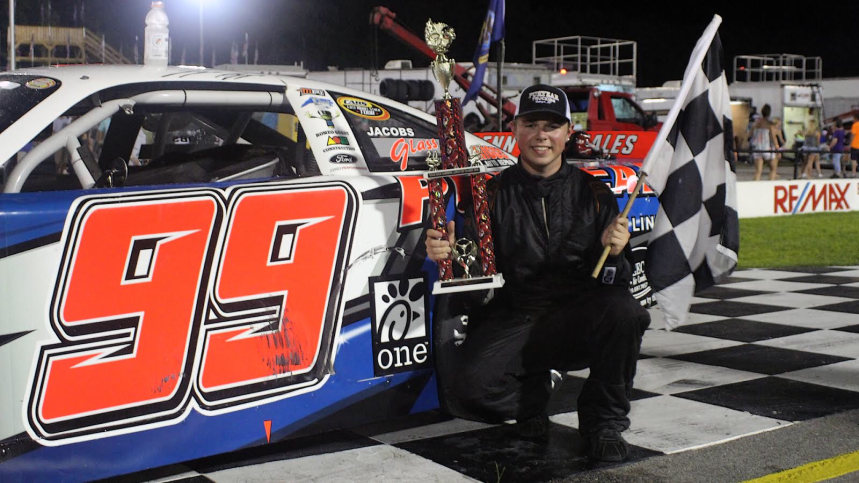 Riggs took the lead on lap 64, getting around Jason York just moments after York had passed Michael Tilley to inherit the top spot.  Riggs then had to hold off a challenge from Mason Diaz.  However, Diaz would be eliminated in a melee on lap 104 that swept up most of the field – including Tilley and York.  From there, Riggs never looked back as he went on to pick up the victory.

“At the beginning of the race, I didn’t even think we had near the best car,” Riggs said.  “I was just holding on for dear life for my position.  After the break, our tires cooled down, got a full heat cycle on them.  Restarted the race and it was like a brand new racecar.  It was on a rail.  I was just riding at the end, making sure I didn’t make any mistakes or do anything stupid to take me out of the race.”

Riggs previously won the Solid Rock Carriers 150, which was run on July 7th, leading wire-to-wire in the event.  This time, the win did not come in as dominant of a performance as it had in July.

“It was a tough race tonight,” Riggs elaborated.  “It was a lot tougher than last time.  There was a lot more competition.  Carteret County stepped their competition up.  You bring money like that to the table and people are going to come.  It’s proven to be true.”

Chris Burns managed to make his way through the carnage of the lap 104 crash and, in the final laps, raced his way from fourth up to second.

“At lap 60, I came over the radio and me and dad were talking about parking it,” Burns stated.  “It was in bad shape for the first 100 laps for some reason.  I don’t know if we have a rear end problem or a shock busted or what.  We sat there for 10-20 minutes and it seemed like it really helped the car.  We didn’t have anything for Layne but, even with it ill-handling, we saved our stuff and I think that helped with our drive off situation.”

Burns felt he got lucky and said he would have been happy being the last car on the lead lap.

One of the cars Burns was able to pass late was Langley Speedway regular Connor Hall.  Hall is a multi-time Carteret County Speedway winner.  He came with expectations of winning but came away with a third place finish.

“We do have a racecar that we can work on making faster and not work on fixing,” Hall remarked.  “It’s pretty cool to say this is my worst finish at Carteret.  I’m definitely bummed but I can’t be too upset with anybody but myself because I didn’t get it behind the wheel today.”

Brandon Clements ended up finishing in fourth while Clay Jones rounded out the top-five.

Tilley dominated the first half of the race but ended up with a ninth place finish to his credit after being taken out in the big one.  The lap 104 big one swept up six cars in total and was the only significant incident in the Limited Late Model portion of the Labor Day Classic.

While Burns came up one position short in the Limited Late Model race, he was able to finish atop the podium in Street Stock competition.

Burns started on the pole but was involved in an incident in the middle stages of the race with a lapped car while trying to hold off Ricky Locklair, Jr.  Burns quickly raced his way back through the field to score the victory.

“Things happen and I hate it for Locklair,” Burns said.  “Jimmy [Horner] and James David [Horner] really had the car handling well.  I appreciate them letting me drive it.”

Will Bristle dominated much of the 40 lap Legends race, but Mason Diaz got past him in the closing stages of the race.  Diaz looked like he would cruise to victory, but a late race caution set up a three lap shootout.  Coming to the white flag, Bristle was able to get around Diaz to take the lead and the win.

“This win was by far the toughest,” Bristle said.  “I got to thank Mason for driving me as clean as he could.  That was such a blast, being able to race with teammates that close and put on such a good show for the fans.  We’ve put a lot of work in our cars this year and it’s really showing off.”

Diaz was ecstatic after finishing in second.

“That was a blast,” Diaz exclaimed.  “I haven’t had that much fun in a Legend Car in, I couldn’t tell you how long.  Really good teammate.  He raced me clean.  I tried to get to him in that last corner but he was just too far away.”

Rafe Slate finished in third while Eric Courtney and Cody Hall rounded out the top-five in the 23 car field.  The Legends race, which was sponsored by Riverside Dodge, featured the largest field of cars to take the green flag for a feature race in Carteret County Speedway history.