Field Set for the 2018 ValleyStar Credit 300 at Martinsville Speedway

Posted on September 29, 2018 by Justin Kern Leave a comment 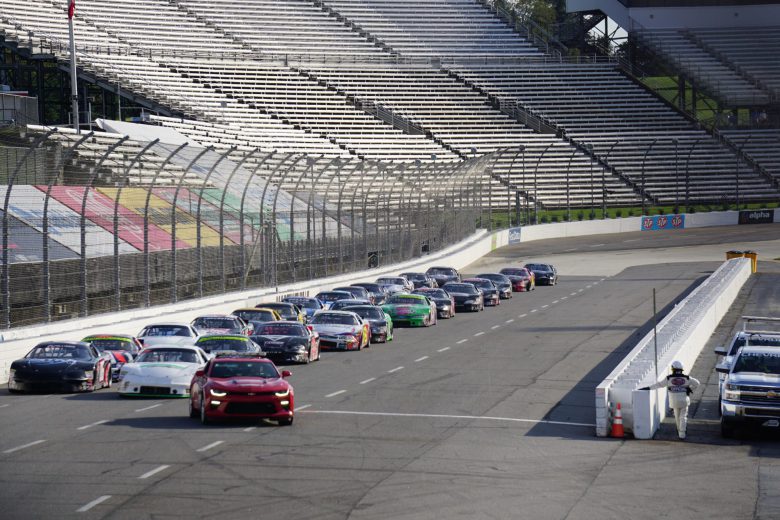 Caution Car heading down pit road before the start of the LCQ at Martinsville Speedway Saturday, September 29, 2018. (Andy Newsome/Loose In Tight Off)

Ridgeway, VA – The field for the richest Late Model Stock Car race in the country has been set. Over seventy cars took to the half-mile speedway earlier this afternoon to narrow the field down to forty-two. The only two cars that were safe – Stacy Puryear and Tommy Lemons, Jr.

Philip Morris, Josh Berry, and Brandon Pierce were the three winners in their respective heat races has the sun began its descent over the famous Paperclip shaped track. Ten cars from each heat race transferred into the main feature making up the first thirty-two starters. Everyone else, that could answer the bell, were sent to the 25-lap Last Chance Qualifier.

Race fans are able to watch LIVE on Fanschoice TV where MRN radio broadcast will be piped in. For a lap-by-lap coverage, scoring and NASCAR insight you can follow along with us as we will have you covered throughout the night.

Three Cars From Top Ten Times Were Disallowed After Failing Post Qualifying Inspection; Will Start from the Rear of Their Respective Heat Races

Posted on September 28, 2018 by Justin Kern Leave a comment

Ridgeway, VA – Post qualifying tech has officially wrapped up here at Martinsville Speedway. Once again the “Room of Doom” has shaken things up on the eve of arguably the best race of the year in the Late Model Stock Car community.

Bobby McCarty (22), Todd Gilliland (45), and Matt Bowling (83) were all found to have issues with the rear ends of their machines. NASCAR officials have stated that all three teams will have the opportunity to fix the issues in the morning, roll back through tech and should they fix all the issues, they have the chance to start their respective heat races from the rear. The speedway also clarified that the no. 70 of Dylan Ward and no. 44 Kyle Dudley both completed engine swaps and will start behind the three cars mentioned above.

Fan gates open at 1 p.m. on Saturday with the driver autograph session scheduled for 1-2:30 p.m. on the front stretch. Three 25-lap qualifying races, followed by the 25 lap LCQ to set the field will start at 3 p.m. The 200-lap feature race will begin at 8:00 p.m.Motor Racing Network’s live coverage of the race and the free online stream of the race, on FansChoice.tv, will begin at 7:30.

Motor Racing Network’s live coverage of the race and the free online stream of the race, on FansChoice.tv, will begin at 7:30.

Tickets to the ValleyStar Credit Union 300 are $30 for adults and $5 for children 12-and-under. Tickets can be purchased at the Speedway ticket office or online at http://www.martinsvillespeedway.com. 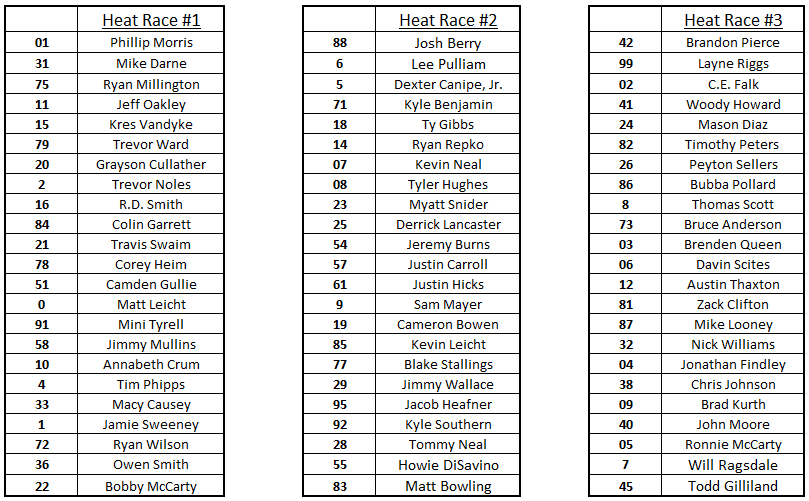 Posted on September 28, 2018 by Justin Kern Leave a comment

Stacy Puryear addresses the media for the second year in a row after earning an even better front row starting position for the 2018 ValleyStar Credit Union 300. (Casey Kern/TheWeeklyRacer.com)

Ridgeway, VA – It is that time of the year again! When the best Late Model Stock Car drivers, and this year one of the best Super Late Model drivers, converge on to the half-mile paper clip that is Martinsville Speedway.

The ValleyStar Credit Union 300 is one of the richest races of the year and also brings some of the largest car counts any track has seen. It was also this time last year just about everyone in the media center had their stories ready to go… Jeff Oakley and Deac McCaskill Start on the Front Row Under the Lights… or something along those lines. However, that was all thrown out the window when both cars, something that is a little unheard of in these big races, were found to be illegal post qualifying, handing the front row over to Jake Crum and Stacy Puryear. This year, however, was not the case.

Fast forward a year later and Puryear has found himself once again on the front row, this time it was solely based on his time, and one position better. Seventy-two cars took to the speedway in groups of five, grouped from slowest to fastest, for five timed laps under the lights. Puryear went out for his five timed laps about midway through the session and laid down a 20.100 (89.552 MPH), Tommy Lemons Jr. clocked in right behind him, the two are locked into the front row and will not have to run any of the heat races tomorrow afternoon.

“Last year we learned that the dew fell and the track got slicker,” Puryear said. “We thrashed on that thing and didn’t put tires on it at the end of practice last year. We learned a lot last year when the sun went down and took that with us tonight.”

“I honestly did not think I would be coming in here tonight,” Lemons explained. “I was hoping for a top ten or something. The car felt really good though off the truck, I told the guys not to really touch a whole lot.”

Official qualifying results were not made available to us at the time this article was posted as cars are still working through tech. Keep an eye out here and our social media pages and we will post them as they are confirmed to us.

Things will get started tomorrow morning at 10 AM when the garage opens. Fan gates will open at 1:00 PM same time the on-track autograph session kicks off. Heat races will roll off approx. 3:00 PM with a target green flag of 8:00 PM for 200-laps.

**This is an unofficial posting of the qualifying order from today, will update when positions are finalized**

Posted on September 27, 2018 by Justin Kern Leave a comment

A field of Late Models takes the green flag for a restart at the Labor Day Classic at Carteret County Speedway in September 2018. (Andy Marquis photo

SWANSBORO, NC – The show will go on at Carteret County Speedway and the track will resume racing with events on October 27th and November 17th to close out the 2018 season.

Track owner Bobby Watson remains stable and is home after being hospitalized earlier in September and repairs are underway to facilities at the track damaged by Hurricane Florence.  Carteret County Speedway will be ready to race on Saturday, October 27th with the Solid Rock Carriers Race for Recovery presented by C&S Paint Center and Sportsman’s Wholesale.

The Race for Recovery will not just be about racing but also helping to give back the community.  Proceeds from each ticket will go to help benefit local hurricane recovery, while also producing a night of family fun for the community.

Pre-race festivities for the Race for Recovery will include a concert by James Carothers, a Nashville recording artist who vocally resembles country music legend George Jones, as well as a Trunk-or-Treat.  During an intermission period, the track will host a Halloween costume contest for kids and adults as well.

The Race for Recovery on October 27th will feature racing for Limited Late Models, Street Stocks, Mini-Stocks and U-CARs will all race for their respective division championships.  The Southern Ground Pounders Vintage Racing Club and the East Coast Flathead Ford Racing Association will be on hand to bring a blast from racing’s past to the track as well.

Sunday evening, Carteret County Speedway track owner Bobby Watson returned home and was greeted by a congregation of racers and fans alike who gathered for a prayer and support rally.  Watson has shown signs of improvement in the past week and remains in stable condition.

Posted on September 27, 2018 by Justin Kern Leave a comment

Mooresville, NC —The 2019 calendar year will mark the fifth anniversary for the CARS Tour, and its second season with tour title sponsor Response Energy Drink on board. Over the four previous seasons the CARS Tour has hosted 85 different races between both the Super Late Model and Late Model Stock divisions.

Throughout those events, 353 different drivers have made a start in CARS Tour competition, with over $2.1 million dollars in purse money being paid out during that period.

With the 2018 season championships still to be decided for both the Late Model Stock and the Super Late Model divisions at South Boston Speedway on November 3rd, the tour is proud to announce the 2019 season schedule.

The schedule consists of 11 points races and 1 non-points race for Late Model Stock Cars and 8 championship points races for Super Late Models. The CARS Response Energy Tour will once again host events in North Carolina, Virginia, and Tennessee. For the first time in series history the tour will not visit the Palmetto State, however, the series will make much anticipated returns to familiar tracks in Southern National, Motor Mile, and Dominion Raceway. Another stellar edition to the tour, will be the series debut at Langley Speedway in Hampton, Virginia, to go along with the previously announced non-points Late Model Stock Car race on the Dominion Raceway two mile road course.

“We are proud of this schedule and we are happy to get it out early so our competitors, fans, and our partner tracks can plan appropriately for the 2019 season. While we are sad to see awesome events at tracks like Wake County and Myrtle Beach go away, there’s no doubt that they’ll be back with the CARS Tour in the future. We’ve always made it a priority to mix things up on our schedule to prevent it from becoming stale,” explained CARS Tour Series Director, Chris Ragle. “With that said I think we have great 2019 schedule at some phenomenal facilities.

With the return of the Touring 12 program, the $500 bonus for running three races in a row, The Old North State Nationals for Late Model Stocks, 40% of the Super Late Model races paying $10,000 to win, two co-sanctioned Super Late Model events, and the 3rd Annual Mid Atlantic Classic we should have a great fifth anniversary season ahead of us.”

For additional information on the CARS Response Energy Late Model Stock Tour and the CARS Response Energy Super Late Model Tour visit http://www.carsracingtour.com. Be sure to stay active and social with the tour by liking “CARS Tour” on Facebook, following @CARSTour on Twitter, and scrolling through photos on Instagram cars_tour. Additional series information can be obtained by calling the CARS Tour series office, located in Mooresville, NC, at 704.662.9212.

-Inaugural “Old North State Nationals” at Orange County Speedway April 6-7, 2019 will be the largest paying LMSC race in history with a minimum of $30,000 going to the winner and a minimum of $1,250 awarded to start the six tire feature event. An announcement of a “Stimulus Program” for competitors to pay for their race expense via supporters and grow the race purse leading up to the event will be announced in the coming weeks.

-The third annual Throwback 276 at Hickory Motor Speedway continues on its traditional date of August 3rd.

-For the third consecutive season the 2019 LMSC champion will be crowned at South Boston Speedway.

-The co-sanctioned race between the CARS Tour, Southern Super Series, and CRA at the Fairgrounds Speedway in Nashville, Tennessee moves to May 4th.

-The 3rd Annual Mid Atlantic Classic at Orange County Speedway, that will once again pay $10,000 to win and an overall increased purse, moves to August 24th.

-The third annual Throwback 276 at Hickory Motor Speedway continues on its traditional date of August 3rd.

-The return of Super Late Models to the ultra-fast and beautiful Motor Mile Speedway in Radford, Virginia happens on May 18th. This will be the first time SLM have graced the track since the 2015 inaugural season.