Posted on August 5, 2018 by Justin Kern Leave a comment 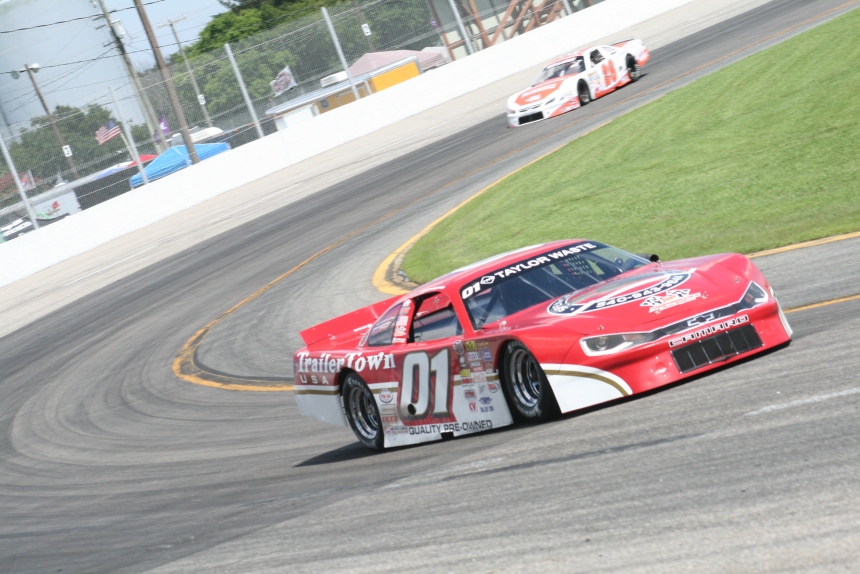 Hampton, VA – It was almost a clean sweep for current NWAAS National point’s leader Philip Morris this weekend at Larry King Law’s Langley Speedway. That was until Danny Edwards Jr. went out for his qualifying lap. Edwards needed just one lap to get the job done. His 15.679-seconds (90.695 MPH) was just a mere hundredth of a second quicker than Morris who would roll off second. Peyton Sellers, Connor Hall, and Greg Edwards rounded out the fastest five starters.

Race one conformed to the standard operating procedure for twin features – calm, cool, and pretty much collected. The only issue to bring out the yellow flag was an issue with Craig Eastep on lap. He came to a stop a complete stop in turn four on the initial start. He was able to drive away and return to pit road, however, he was unable to return for the rest of the race. Because the field completed at least one lap there was no need for a complete restart. Not that it mattered because once Philip Morris got up to speed it was lights out from there. Morris was so good in fact he lapped everyone from fifth on back. Danny Edwards Jr., Peyton Sellers, Connor Hall, Timmy Phipps, rounded out the top five.

Race number two also certainly fit the standard operating procedure for twin races – crazy, eventful, and wild. Because of the eight-car invert per the NASCAR rule book, Terry Carroll and Duane Shreeves both earned a front row starting spot. Peyton Sellers, however, had to go to the rear of the field due to a tire change between races while Philip Morris elected to go to the rear for maximum NASCAR points as we all expected.

Things got hot and heavy up front as the race saw three rather quick lead changes. Terry Carroll had it for a couple hundred feet, followed by Greg Edwards for about five laps, then Connor Hall took control and really looked to set sail and potentially notch another mark in the win column for the young driver at his home track as he put a good bit of distance on him and the rest of the field as they were trying to work around Shreeves. The entire race would change, however, when the caution flew for the first time on lap thirty-one following Thomas Scott’s spin in turn two. Not only did this allow for the field to bunch back up but, it also allowed for drivers to take the cone.

Philip Morris just happened to be on of them. Restarting the race from the sixth position and immediately gaining two more positions at the exit of two once the field was back underway. Morris would get another huge break a handful of laps later after two separate incidents on the speedway – Sellers spinning in two and Terry Carroll on the front stretch – would bring the yellow flag out once more and erasing the half straightaway lead the Hall had built.

Morris yet again took the cone for the ensuing restart, only this time it lined him up on the outside pole. The two would battle side by side for the lead for just a couple of laps before a third yellow flag would slow the field. Morris was scored the leader on the previous lap so he would take sole possession of the top spot. Danny Edwards Jr. would keep him honest on the following restart but it was not enough this time to hold of the national points leader and Morris drove on to pick up his second full field win of the evening.

Dale Parro was fastest earlier in the afternoon in qualifying for the Old Skool Video Games Super Streets series and would ultimately hang on to win one of the more physical 40-lap races of the 2018 season. Race fans not only witnessed several cautions but there were a couple different leaders between Parro, Chris Roberts, and Gordon Weeks, and even an on track temper tantrum to say the least. The race would ultimately come down to a green, white, checkered finish as Dale Parroo held off an incredibly hard-charging Chris Roberts.

Travis Wall finally dethroned Adam Florian in the Pro Six division after capturing the pole earlier in the afternoon. Wall managed about a two to six car length lead throughout the entire 30-lap feature, even after his motor starting sounding a little ill. Colby Vance picked up his first win of 2018 in the 25-lap UCAR feature. Aaron Leach continued his winning ways in the HRKC Winged Champ Kart features and Johnny Shonk picked up his first two wins in the visiting Virginia Mini Cup series twin features.