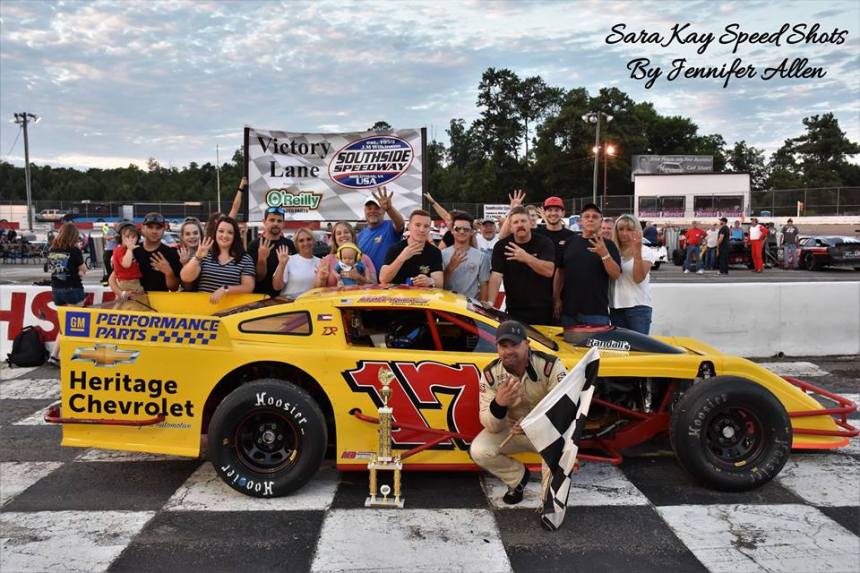 Midlothian, VA – Chris Hopkins of Chesterfield Virginia also continued to have a standout season when he not only won the Late Model feature to close out the night but he was also the fast car in the nine-car modified field earlier in the afternoon as the sun was setting over the historic speedway. Hopkins’ 14.951-second (80.254 MPH) was the only one to hit under the fifteen-second, Michael Johnson, Kyle Wood, Lauren Edgerton, and Wayne McGee were the fastest five.

Hopkins wasted zero time getting the throttle down to the floor and jumping out to the front of the field setting a pace matched by no one. Hard racing for fifth place as Kyle Wood tried to make his way through the field. He would make some hefty contact with Wayne McGee out of turn two, which would bend his left rear quarter panel pretty bad. McGee was able to gather the car back up but would lose it once he got back to turns one and two bringing out the races first and only caution on lap five.

With no one else involved in the caution and no debris on the racing surface it was a quick caution period. Once back under green Hopkins retook the lead and got back to his leading ways. The restart sparked an amazing battle between long time modified series racer Lauren Edgerton and Kyle Wood. Kyle would ultimately get the position and Lauren would fall to fifth by the end of the feature.

Hopkins would again go on to lead every lap in the 30-lap feature doing some that we cannot recall being done in the modern era – leading every lap in route to victories in two different divisions. Michael Johnson, defending track champion Kyle Wood, Tyler Davis, and Lauren Edgerton rounded out the top five finishers.