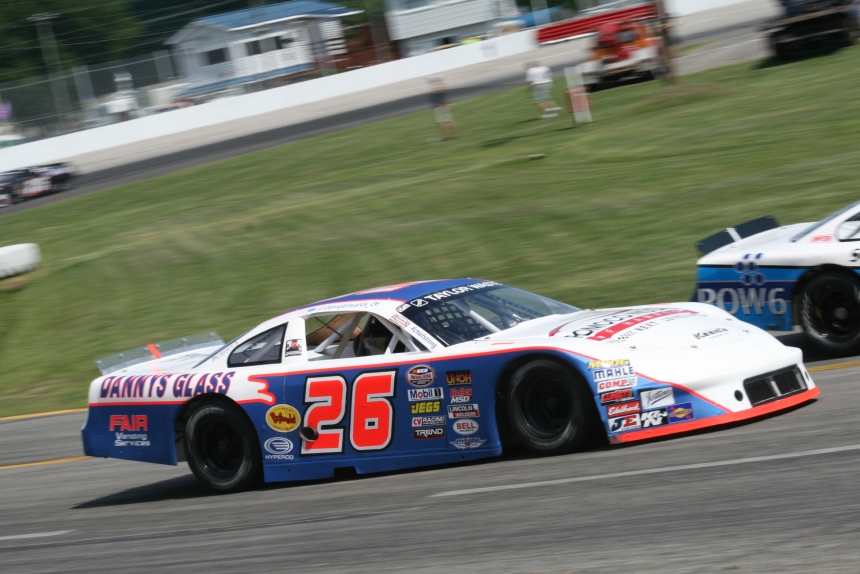 Hampton, VA – With the final weekend before on deck before the prestigious Hampton Heat 200 fifteen Late Model Stock Cars were on hand for twin 75-lap features. Philip Morris, coming off a second-place finish in the opening leg of the Virginia Triple Crown rolled into town and collected yet another pole win earlier in the afternoon laying down a 15.639-second (90.927 MPH) lap. Danny Edwards Jr., Greg Edwards, Brenden Queen, and Garrett Bunch rounded out the fastest five starters.

It was clear from the drop of the green flag that Philip Morris and Danny Edwards Jr. were going to be in a league of their own. Within the first handful of laps, the two had built a full straightaway lead over the fifteen-car field. Greg Edwards, however, did not get the start to the race he would have hoped for as he found himself running second to last just fourteen laps in. As Morris and Danny Edwards pulled away fans in the stands witnessed some great battles as Mark Wertz, who rolled off tenth, worked his way through the field and eventually up to third.

The proverbial wick was turned up between the top two drivers with a little over twenty-five laps to go. Danny Edwards, who had been stalking Philip Morris all race, was finally able to make his move – on the outside nonetheless. The two would battle door-to-door for about ten laps before Edwards could clear the No. 01 and take sole possession of the lead. That lead would not last long, however, has Morris regrouped running behind Danny, retaking the lead on lap 58 and eventually going on to take the race win. Danny Edwards Jr., Mark Wertz, Garrett Bunch, Brenden Queen were the top five. Justin T. Carroll, Justin S. Carroll, and Greg Edwards were sixth through eighth.

A standard eight-car invert was in-store for race number two, handing the front row to Greg Edwards and Justin S. Carroll. It did not take long for things to get wild, per usual, for race number two. Mark Wertz ran into mechanical issues from the start coming by the start-finish line spitting and sputtering. He would eventually come to a stop in turn three and need assistance off the racing surface. Once Wertz was clear and the green flag was displayed Greg Edwards was able to go back to what he does best at Langley Speedway – leading the race.

The race was slowed a few more times as the feature went on as various cars were caught up in wrecks or ran into other issues. One of those drivers happened to be Danny Edwards Jr. Electing to come down pit road during the long caution fearing he had a track bar mount break crews actually found just four pounds of air in the left rear tire. They were able to get the tire changed – which actually made him ineligible for the cone and free pass for the rest of the night – and sent him back on his way. Another driver with issues later on was the No. 01 of Philip Morris. After electing to start in the rear of race two for max bonus points in the NWAAS National Points hunt, Morris found himself in a precarious position in turn two after he spun out working his way through the field. He would eventually come down pit road to the attention of his crew as well as Langley Speedway officials. After giving the car two, three, and four looks over he returned to the racing surface for a handful of laps before parking it citing suspension issues.

With the help of some cautions and cone restarts Danny Edwards was able to work his way back through the field and track down his younger brother and eventually pass him. After that it was lights out, Danny Edwards cruised to his second victory of the season. Greg Edwards, Justin S. Carroll, Connor Hall, and Brenden Queen rounded out the top five finishers.

Dustin Mullins picked up another victory in the 25-lap Harris Truck Shop Super Truck feature while Paul Lubno and Robbie Parker – filling in for Sammy Gaita – put on a heck of a show in the Pepsi Grandstock 40-lap feature. Paul Lubno coming away with the win. Charlie Bryant crossed over divisions from UCAR’s to have some more fun and found himself in victory lane at the conclusion of the 30-lap Bojangles Enduro feature.