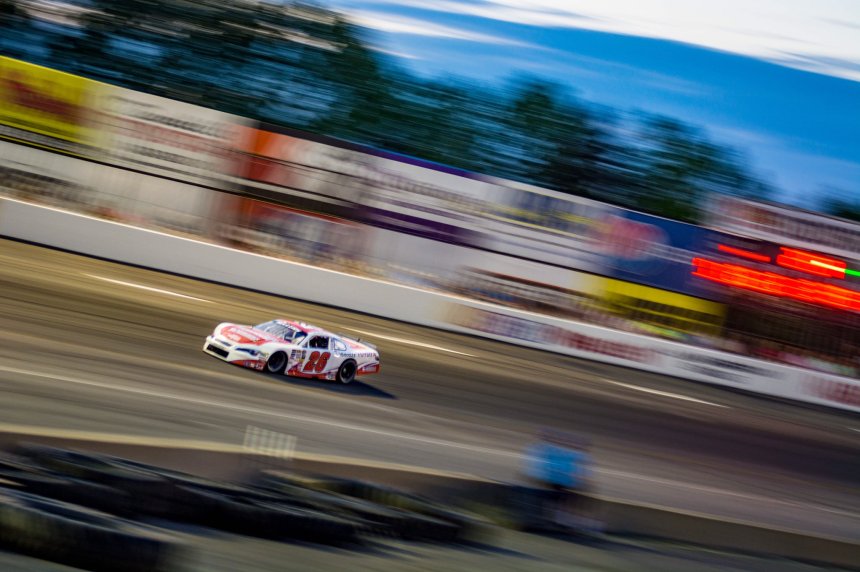 SOUTH BOSTON, VA – Peyton Sellers scored his second win of the season at South Boston Speedway Saturday night and did it in a stirring fashion in the track’s biggest NASCAR Late Model Stock Car race of the season.

The Danville, Virginia resident fended off Philip Morris in a 17-lap sprint to the finish that followed the last of the race’s seven caution periods to win the Thunder Road Harley-Davidson NASCAR Late Model 200. Sellers’ win was worth a total of $8,000. He picked up $6,500 for winning the race, scored a $1,000 prize from Sparks Oil Company for winning the pole and earned another $500 prize from Sparks Oil Company for leading the most laps.

Saturday night’s win was the second of the season for Sellers at the .4-mile oval. It was the first win for Sellers in South Boston Speedway’s premier mid-summer classic that serves as the first leg of the Virginia Late Model Triple Crown. The Hampton Heat at Langley Speedway later this month and the ValleyStar Credit Union 300 at Martinsville Speedway in late September comprise the other two legs. The driver with the best average finish in the three races earns a $10,000 prize at the conclusion of the race at Martinsville Speedway.

Sellers led four times for a total of 129 laps in the race that saw the lead swap hands 10 times among six different drivers. Morris led twice for a total of 25 laps. Eight of the lead changes occurred in the first half of the race.

Sellers caught two big breaks during the race, the first coming when he pitted on lap 53 during a caution period to have his team change a flat right rear tire. He raced his way back to sixth place by the mid-race break and restarted the race from fourth place after Morris, the halfway leader, drew a nine for the inverted restart, meaning the top nine drivers at the halfway break would be inverted for the start of the second half of the race.

He needed only three laps after the restart of the race to take the top spot. Once in front, Sellers never relinquished the lead, fending off challenges from Hughes and Morris to secure the win.

Dana, of Mooresville, North Carolina, muscled her way past Trey Crews of Halifax, Virginia on the 47th lap and edged Crews by .825-second to win Saturday night’s 75-lap race. With the win, Dana became the first female driver to win the track’s biggest Limited Sportsman Division race of the season.

Karl Budzevski of Montvale, Virginia, Jacob Borst and Daniel Moss of Danville, Virginia rounded out the top five finishers in the 12-car field.

Cameron Jarrell of Amelia, Virginia made it a perfect three-for three Saturday night, winning the 20-lap race for the Budweiser Hornets Division.

The win in the season’s biggest race for the division’s competitors gives him wins in all three of the races run in the division to date this season.

Jarrell led twice for a total of 16 laps in the race that saw t he lead change hands four times among four drivers.

NEXT RACE AT SOUTH BOSTON SPEEDWAY

Admission is $10 for adults. Kids ages 12 and under are admitted free when accompanied by a paying adult.

For additional information about the Southern Virginia Higher Education Center NASCAR Late Model Twin 75s racing program or any other events at South Boston Speedway, please visit the speedway’s website at http://www.southbostonspeedway.com or telephone the speedway at 434-572-4947 or 1-877-440-1540.