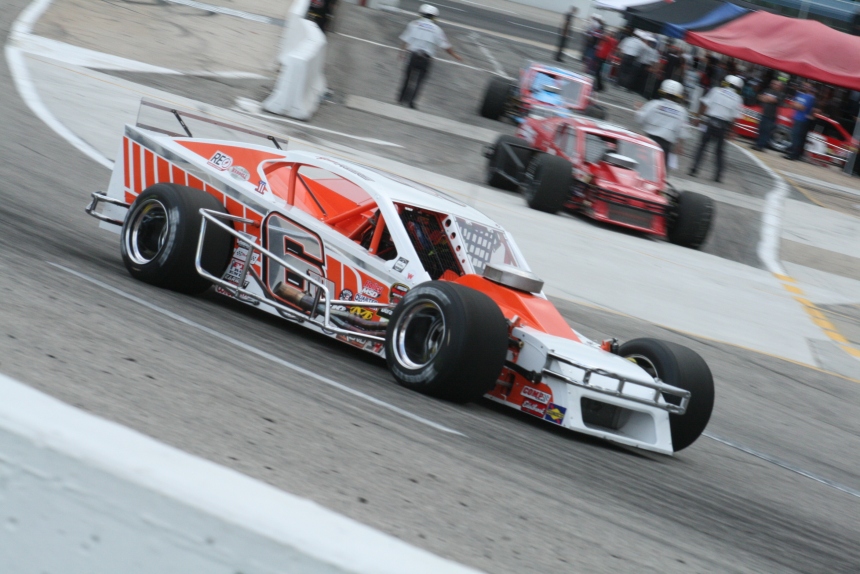 Hampton, VA – It was the Ryan Preece show this weekend as the monstrous NASCAR Whelen All-American Modified series rolled into town. After posting the fifth fastest time in practice Preece shot to the top of the speed charts during group qualifying after laying down a 15.046-second (94.749 MPH) lap. Matt Hirschman, Craig Lutz, Chase Dowling, and Justin Bonsignore made up the fastest five starters of the twenty-seven-car field.

When it was go time Matt Hirschman used the outside line – which would later come back to work for multiple drivers throughout the feature – to get around Preece to take the lead and the two of them started checking out from the rest of the field before having to slow up for a couple of cautions back to back. The two would play a little cat and mouse game exchanging the lead a few times both under green as well as on the restarts.

One driver who seemed to benefit from those early cautions was the No. 15 of Chase Dowling, he would take the lead from Preece on lap 50 making him the third different of the night. A scary moment a handful of laps later when two lap cars made contact just in front of the leaders and going for a spin. It was everything Dowling and Preece could do to avoid the wreck themselves. On the ensuing restart, Preece would use the outside to his advantage this time and regain the lead.

It was a handful of laps later the leaders had yet another scare when the lap car of Gary McDonald got into the outside wall, rode it for several feet, then came down across the track in front of Preece to bring out the yellow flag around lap 96 – luckily no contact was made by either driver. This allowed several drivers like Bonsignore, Coby, and Rocco to hit pit road. Race control would decide to go back green and run to lap 103 before throwing the competition caution for the five-minute break.

Preece was the first car to hit pit road for the five-minute break, which would mean he would rejoin the field in the fourth position when it was time to go back racing, Justin Bonsignore led them back to green. Once the cars were back up to speed it was like the gloves had come off in a hockey game and no one was pulling any punches.

At one point the leaders were three wide going into turn three with Ryan Preece forcing the issue. He and Bonsignore would make a little contact and Doug Coby would be the car to receive the worst end of the stick. He would later loop it going into turn one, make contact with the outside wall, lose his left rear tire and retire from the race. Once back green Preece was a man on fire haunting Bonsignore, putting on one hell of a show for the fans.

With twenty laps to go in the feature, Preece made his move under Bonsignore going into turn on and was able to complete the pass out of four. It was lights out from there on and Ryan Preece cruised to his first Langley Speedway victory of his career. Justin Bonsignore, Matt Hirschman, Timmy Solomito, and Eric Goodale rounded out the top five finishers. Preece was excited to finally be in victory lane, to say the least at Langley Speedway.

“[We] came here twice for the Southern Tour, lead a lot of laps but were nothing at the end,” Preece said. “We’ve been doing our homework, we’ve been trying to be good on both the 630 and the 500. It seems like we really found a pretty good balance for both and I’m super excited. It was a hell of a race with Justin [Bonsignore], he did a great job, and he was definitely protecting the bottom. Our car was so good for those first twenty laps. I knew it was going to even out so I knew I had to get by him. We did the long drive last night and not much sleep so this is going to make that ride home a little easier.”