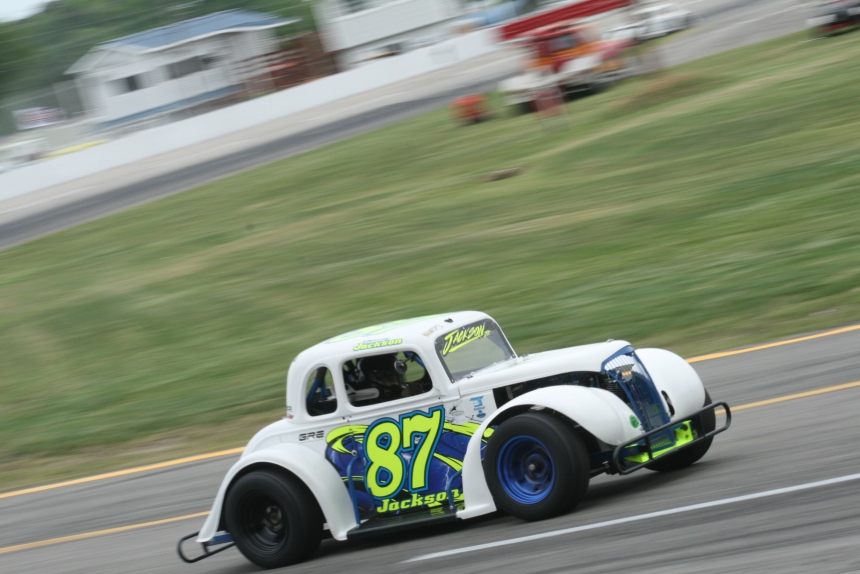 Saunders got off to a great start when flagman Shayne Snider displayed the green. He was able to clear the field out of turn number two and try to get his rhythm going. Jackson spent a couple of laps working to get clear of the third-place machine of Sylvestri and when he did he brought Jamie Price – who ultimately had mechanical issues that took him out of the race – with him setting his sights on the lead.

The battle was on by lap three and complete by lap four when Saunders made just a little bobble out of turn two. The slip was all Jackson needed to get his nose under the No. 7 machine and complete the pass out of turn four. It was lights out from that point on, Jackson ended up building at least a fifteen or more car length advantage over Saunders.

Daniel Sylvestri would remain locked in the third position essentially all race while Devon Courtney ended up getting around Ryan Center in the closing to break into the top five. That is when Price would have his mechanical failure allowing both Courtney and Center to move up one spot on the leaderboards.

Layton Harrison (43) & Autumn Weaver (18) dial their cars in during final practice on May 5th, 2018. (Justin Kern/TheWeeklyRacer.com)

Layton Harrison continued to dominate the Casey Cycle City Bandolero division this past Saturday night winning yet another pole aware and ultimately the race. The battle was on behind him, however, between Autumn Weaver, Ryley Music – grandson to Langley Speedway Late Model legend Phil Warren – Wyatt Philyaw, and Logan Clark. Autumn Weaver found herself on the better side of that battle as she finished second over Music, Philyaw, and Clark.