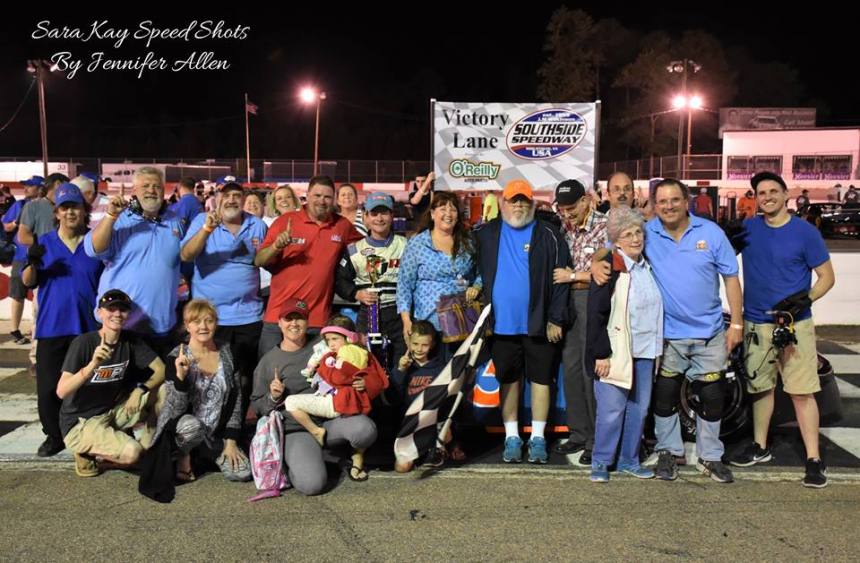 Midlothian, VA – Kicking the race weekend off was Southside Speedway in Midlothian, Virginia. Otherwise, known as the “Toughest Short Track in the South” had Late Models, Modifieds, Grand Stocks, UCAR, Legends, and Bando’s on the schedule for their first responders night.

Chris Dodson flexed his muscles earlier in the afternoon during the final practice/qualifying for the Late Model division earning the pole position being the only driver to hit a sub fifteen-second lap – 14.991 (79.968 MPH). John Goin, Howie Disavino, Bugs Hairfield, and Sonny Allen rounded out the top five fastest qualifiers in the field of ten. However, at the end of the 40-lap feature, it was veteran Late Model racer Eddie Johnson in victory lane. Dodson would finish almost three-tenths of a second behind the leader followed by Mason Bailey, Michael Sutphin, and Lane Janosik.

Dan Rogers was the quickest of thirteen Grand Stocks who came out to compete during First Responders Night. However, because Rogers had won the two previous races, he was forced to start at the rear of the field due to a long-standing Southside Speedway rule. Rogers would fight is way back up to the front but ended up just one position short by the end of the thirty lap feature. Austin Dodge was the first to the checkered flag and picked up his first victory of the season.

Michael Johnson was able to dethrone Chris Hopkins in the Modified division after setting quick time earlier in qualifying. Hopkins, who recorded the second fastest time, was forced to start at the rear of the field after winning the first two races of the season. Hopkins was able to drive back to the second position when the checkered flag flew. Ethan Ayers took the checkered in the UCAR feature while Cody Carlton picked up the win in the INEX Legends feature. Zachary Miracle opened up the night with a win the INEX Bandolero division.