Posted on October 23, 2017 by Justin Kern Leave a comment 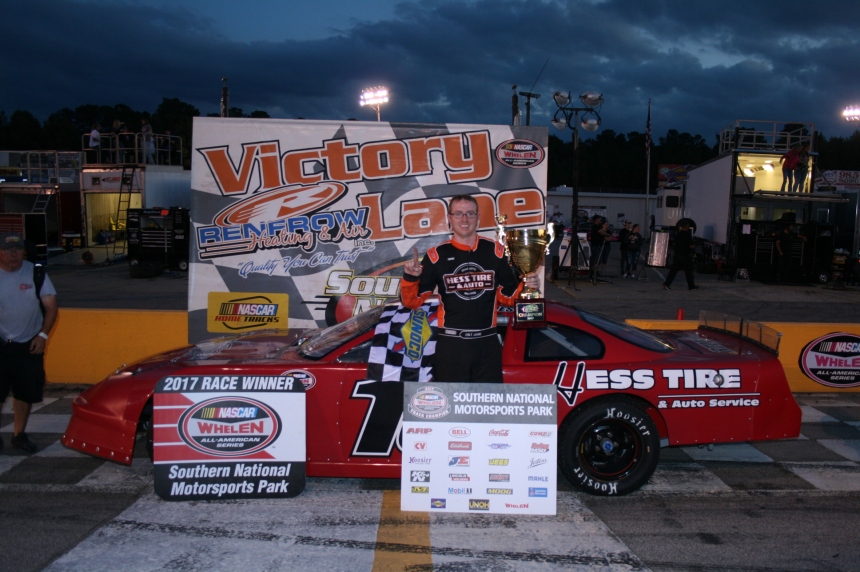 Findley was certainly the car to beat early in the race creating over a full second lead over the rest of the field when the green flag was displayed. Findley would set a blistering pace until lap 42 when he fell off the pace quickly and came to a dead stop on the front stretch. The caution would be displayed for the second, and what would be final time of the first 75-lap feature. Findley would get the car fired back up and drive towards the end of pit road where he would stall and need assistance off the speedway.

It would take two attempts to get the race going again as the tower did not like something on the restart. However, once the field was rolling Diaz was able to jump ahead of James to take the race lead. Colt James would struggle just a bit on the top groove and ultimately surrender second place to Casey Roderick. Diaz would lead the rest of the way to the checkered flag snapping Colt James eight-race win streak, earning his first career win in a Pro Late Model, and collected the $1,000 bounty that had been growing throughout the race season.

A four-car invert was instituted for the final 75-lap feature for the Fast Five Pro Late Models handing the front row over to the top two contenders for the championship; Will Bristle and Colt James. It was all Colt James when the green flag was displayed, and with a little help from a not so good start from Bristle, took sole possession of the race lead and never looked back. Roderick looked to give the eight-time winner a run for his money, however, until something let go under the hood of Roderick’s car ending his night on lap eighteen.

James would flex his muscle on the ensuing restart following the red flag conditions leaving Mason Diaz to battle Jody Measamer for second. At one point, during the final handful of laps, you could have thrown a blanket over the top three cars that was how close they were running. Measamer was able to take the second position from Diaz on the final restart of the race and was able to keep Diaz behind him to capture the second place finish. James’ ninth win in ten tries was, of course, enough to clinch the 2017 track championship.

“We’re like the little team that could,” James said in victory lane Sunday evening. “You’ll never beat me in heart. I always got more heart. We’re just like everybody in the stands, we’re blue collar. We go to work from 7-5 Monday through Friday, come out here and race our butts off and try to show that there’s still room for the little guy out here. We just try to win races.”