Posted on October 6, 2017 by Justin Kern Leave a comment 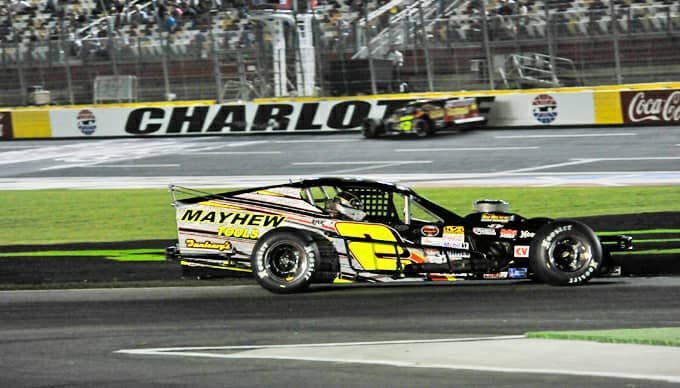 Doug Coby works through turn three on his way to victory in the 2017 Summer Slam 150. (Hunter Thomas/NASCAR Home Tracks)

Concord, NC – When you are on, you are on. This weekend at Charlotte Motor Speedway, defending series champion Doug Coby was just that, on. Spending most of the practice in either the third or fourth position on the leaderboard, Coby turned up the wick when it came time to qualify. A 15.211-second lap was all it took for the Milford, Connecticut driver to win the Coors Light Pole Award over Danny Bohn, Bobby Measmer, Jr., Ryan Preece and Derek Kraus.

Things looked to be a little hairy once the green flag was displayed. Blame it on some of the leftover effects of the recent full moon or the atmosphere of Charlotte but, half of the starting field got tangled up in a wreck very early on down in turns one and two. For the most part, everyone was able to drive away from the wreckage and return to the race, one dominated mostly by current series point’s leader, Doug Coby.

Defending race winner, Ryan Preece, haunted the rear nerf bar of Coby for the first 80-laps of the 150-lap feature. He would eventually have to retire from the race early with a broken brake rotor. This left Doug Coby to deal with the likes of Danny Bohn and Corey LaJoie. LaJoie would retire his Dunleavy Truck and Trailer Repair machine just twenty-nine laps later, he too with issues.

This left Coby and Bohn to settle the race win between the two of them. It looked as if Bohn was going to steal a victory after taking the lead out of turn two on a restart just before lap one hundred. The seasoned veteran that Coby is just stayed right in his tire and used lap traffic to his advantage to regain the lead with a bold pass on the outside, going three wide through four, with just eleven laps to go.

Once Coby cleared the traffic it was all she wrote and he went on to pick up the victory. Danny Bohn, Calvin Carroll, Jamie Tomaino, and Bobby Measmer, Jr. would round out the top five finishers.