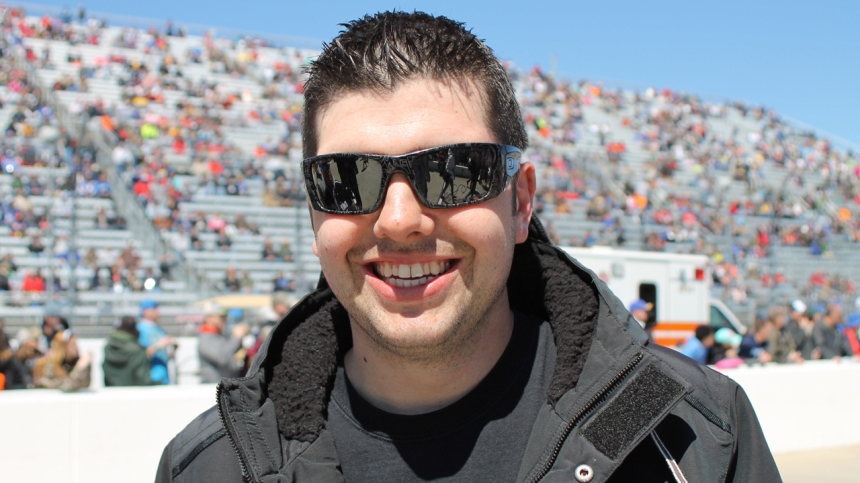 LUCAMA, NC – Bradley McCaskill has his sights set on Colt James and the $1,000 bounty that has been placed on James heading into Saturday night’s Spooktacular at Southern National Motorsports Park.

McCaskill has plenty of experience at Southern National Motorsports Park and is a former winner of the Limited Late Model portion of the Spooktacular.  This weekend, he will compete in the Fast Five Pro Late Model doubleheader and he has every expectation of outrunning James, who has won the last eight consecutive Pro Late Model races.

“Looking forward to racing against Colt,” McCaskill said.  “I hope we can be the team that finally knocks him off his throne. He will be really tough to beat and he is smart with his car and how he races.”

McCaskill will be bringing the car he has been competing within PASS South and CARS Super Late Model competition.  Earlier this year, he ran in a PASS race at Southern National, but a flat right rear tire derailed his performance and relegated him to a 10th place finish.

With his experience at the 4/10-mile track, McCaskill has plenty of confidence.

“Colt really has a handle on his car right now,” McCaskill explained.  “I feel confident that we can get our car to work as good as his.  It will be interesting to see how the motor combinations run against each other.  Plus, there are twins to throw another twist in there.  Who goes hard the first race versus who saves for the second race.”

Along with the Pro Late Model, McCaskill is hoping he can compete in the Limited Late Model race as well – but as of now, he is unsure if he will be able to.  If he is able to race, he will compete in a Late Model ordinarily driven by Ronald Renfrow.

“I hope there are good turnouts for both divisions,” McCaskill concluded.  “Looks like there is good money up for grabs this weekend.”

Since the first running of the Spooktacular in 2014, a race won by Joey Throckmorton, the race has become one of the biggest Limited Late Model races on the East Coast.  Meanwhile, the Pro Late Model division has attracted headliners all season, including points leader Colt James, NASCAR Next driver Hailie Deegan, Jody Measamer, Giovanni Bromante and more.

Saturday’s Spooktacular will get underway at 6pm EST and is headlined by twin 75-lap duels for the Pro Late Models and a 100-lap Limited Late Model race. The Charger division will race for 35 laps, Mini Stocks for 65 laps, Any Cars for 15 laps, Legends for 35 laps, Bandoleros for 15 laps and the Virginia Mini Cups will hold twin 25 lap races.

More information about the Spooktacular can be found at http://www.snmpark.com/spooktacular.

The fall schedule will resume on Saturday, October 28th with the Day of Destruction, which is poised to be one of the biggest events ever held at Southern National Motorsports Park.  The Day of Destruction will feature a Demolition Derby, Enduro racing, burnout competitions, flagpole races and much more.

The Day of Destruction will also feature a Haunted Race Track Tour, continuing a Southern National Motorsports Park tradition that began in 2015.

More information about the Day of Destruction can be found at http://www.snmpark.com/demoderby.

The fall schedule will conclude with the three day, 12 division Thanksgiving Classic which will run from Friday, November 24th through Sunday, November 26th and is headlined by the $20,000-to-win Late Model Stock Car feature.

More information about the Thanksgiving Classic can be found at http://www.snmpark.com/thanksgivingclassic.

This fall, Southern National Motorsports Park will be the place to be for big races and big events.