Posted on September 30, 2017 by Shawn Dulin Leave a comment

Hampton, VA – Landon Abbott came in to the final race of the season in the Old Skoll Video Games Super Streets with a one point lead over Randy Akers and 40 laps to decide the champion. In qualifying Akers was able to grab the pole running a 19.049 second lap, beating out Abbott by .075 of second. Sammy Gaita, who still had a shot because of the big car count, was .002 second behind Abbott.

On the start Akers cleared Abbott off of turn-2 and Sean Calway made a big move going from fifth to second. Abbott had a dreadful start falling all the way back to eighth by the time the lap was finished. It took him about ten laps to get back into a good groove and start his way through the field.

At the front of the field Gaita was tired of running third and started letting Calway know he was the faster car of the two. Twenty-one laps in and he gives Calway a lot of bumper and claims the second place spot. Eight laps later the caution comes out for Chris Hott spun around on the back stretch and the spread out field would be brought together now.

With the race restarting Abbott made it three wide into turn-1 and the rest of the field was pretty aggressive too. Just one lap was complete as Gordon Weeks ended up in the grass and the caution flew again, but not before Sammy Gaita took the lead from Akers.

Abbott took the high side on the next restart putting himself in position to win the title. Landon got the position on the restart but not before some bumping from Akers and Bill Eaker, leading to another caution with Eaker sustaining some damage. On the final restart they went three wide for third place and Akers fell way back with just a few laps to go. Sammy Gaita grabs the checkers by almost a second and Landon Abbott grabs the championship by just a couple points. 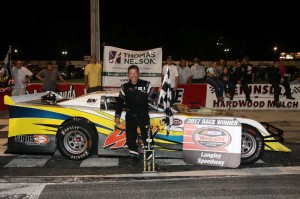 Before the race started Shawn Balluzzo had an insurmountable lead in the points over Bobby Gery, but that didn’t change how Shawn would race at all in the ‘Year of the Buttercup’.

Matt Carter kept up his fast qualifying efforts running a 16.766 second lap to sit on the pole. Balluzzo grabbed second by running a 16.927.

Early on Carter held a big lead over Balluzzo but Shawn closes the gap quickly once they start hitting slower cars nine laps in and this allowed Balluzzo to make his move for the lead. Behind them Andrew Fortin was the fastest car on the track and moved into third place after getting by Danny Harrell.

The race would fly by without incident and it looked like Balluzzo checked out on Carter but in the closing laps he made a valiant effort to try and catch the leader. Slower cars break up his momentum and Balluzzo holds on for his 9th win of the season and his 9th Modified track championship.