Posted on September 16, 2017 by Justin Kern Leave a comment 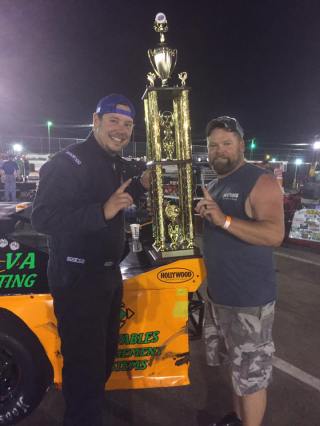 Midlothian, VA. – A new winner was crowned this past Friday at Southside Speedway in the Modified division after Lauren Edgerton capitalized on the four-car invert to lead flag to flag to end her 2017 campaign on top. Kyle Wood, of Richmond, Virginia, entered the weekend with just a single point lead over Mike Rudy in the standings. He would later help his case for promotion to Track Champion by laying down the fastest time of the day in qualifying with 14.844 seconds lap to not only earn him the pole but one extra bonus point. Rudy would clock in just .008 seconds slower missing a chance to tie the points up by no more than a couple inches. Michael Johnson, Matt Morgan, and Lauren Edgerton would round out the fastest five starters.

Due to Southside’s rulebook, Mike Rudy was forced to start the 30-lap feature from the very back of the field due to winning the previous two features back to back. Kyle, on the other hand, would draw a number four out of the infamous pill draw bag forcing a top-four invert for the race. Once the line-up was adjusted this handed the front row over to Edgerton and Yorktown’s own Matt Morgan – who was racing for Rookie of the Year honors.

When the green flag was displayed to the field Edgerton and Morgan completed a high-speed pace lap door to door with Edgerton. Lauren, however, was able to exit turn four just a little better than Morgan on the bottom and took the lead, from there she never looked back. Morgan would try his luck with the top groove to hold off the field but it just was not enough to keep Michael Johnson at bay, who ultimately took the position in just a few laps. Kyle Wood and Mike Rudy followed suit not long after.

Michael Johnson made every attempt possible to take the lead from Edgerton as he stayed glued to her back bumper, even giving her a couple taps in the closing laps but it was not enough to move the No. 7 car off the bottom of the speedway and she was able to hang onto it for the win. The battle for the third position saw plenty of action the caution free race as Mike Rudy applied heavy pressure to the rear bumper of Wood hoping to force a mistake. At one point towards the end, Rudy sent Wood into turn three about three cars deeper than was used to causing the car to step out on him. Thankfully, Rudy backed out of the throttle and let Kyle gather things back up before going back racing and finishing third and fourth respectively. The podium finish was enough to secure his first Modified championship – something his father Rusty Wood did back in 2002.

Austin Dodge would take the victory in the Grand Stock feature after starting from the third position. Dodge would actually qualify in the second position just .002 seconds behind Dan Rogers who set quick time with a 16.291-second lap. A top-four invert handed the top spot over to the No. 21 of Shannon Smith who did an admiral job at showing the way for the first eleven circuits. However, as it has been all season, Austin Dodge has just been in a league of his own it seems. Working his way up from the fourth position he was able to take the lead from Smith on lap twelve and hang on to the end. The victory was also enough to secure the track championship as well. Rogers, T. Ruggles, Simpson, and Smith would round out the top five.