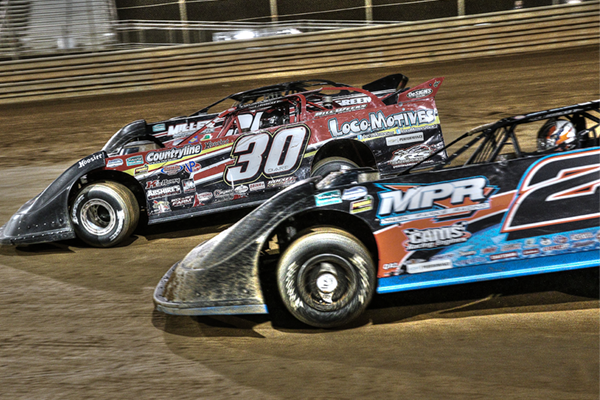 Jamaica, VA – Justin Williams of Concord, VA powered his way inside of Tyler Bare of Rockbridge Baths, VA in turn 1 to take the lead on lap 12 of the Victory Lap Pro Late Model feature. Once out front, Williams would cruise to his fifth win on Northern Neck Chevrolet / Collision One Night to benefit the Northern Neck Food Bank and Feedmore.

“The track was the way back the way I like it tonight and having to start that far back in the field I didn’t think I would get to the front with guys like Walker (Arthur) and Tyler (Bare) up front, but we were able to get up through there pretty quick,” commented Williams in WhosYourDriver.org Victory lane.

In other action Tim Shelton of Fredericksburg, VA led all 30 laps of the Truckin Thunder Sportsman feature on way to his fifth win of the season; in the Budweiser Modified feature Chris Arnold took over the lead on lap 18 from Mike Reynolds of Mechanicsville, MD and went on to score the victory. In the Collision One Limited Stock Car twin features James Givens of Henrico, VA did a little double dipping taking both feature wins.

Tyler Bare and Camden Testerman led the field to green with bare using the outside to lead the first circuit. Bare would pace the field while Testerman, Walker Arthur, and Stephen Childress battled three wide for second. Childress would come out with second but lost the spot to Justin Williams on a lap 4 restart. For the next 8 laps, Williams stalked Bare looking for a way around the leader. On lap 11 Williams jumped inside Bare in turn 1 to grab the lead. Once out front, Williams began to pull away from Bare and the rest of the field. Once out front Williams only had to survive some last race restarts to score his

The Budweiser Modified 30 feature turned out to be a barn burner that had four cars battling for the win. When it was all said and done it was Chris Arnold taking the victory. Mike Reynolds grab the top spot on the drop of the green flag with Hunter McClendon and Arnold in tow. For the next 16 laps McClendon and Arnold each worked different lanes on the track trying to get around Reynolds for the lead. On lap 17 Arnold jumped to the high side, first taking second from McClendon and then getting outside Reynolds as they exited out of turn 2. Arnold would finally secure the top spot at the line and then pulled away for the victory. Point leader Joey Polevoy’s night ended on lap 26 in a wreck in turn 3. Rounding out the top five were Mike Reynolds, Hunter McClendon, Bret Hamilton and eighteenth starting Marks Parks.

On the start of the Truckin Thunder Sportsman 30 lap feature, Tim Shelton made it three wide with Tyler Shipp and Steve Causey. By turn 3 Shelton had taken over the lead. Once out front Shelton would pull away from the field, at one point holding a full straight away lead. Behind him, the battle for second was pretty intense between Adkins, Causey, and Shipp.  Adkins’ night would come to an end on lap 27 with mechanical issues. Shelton only had to survive a few late race cautions to take home the victory followed by Tyler Shipp, Michael Hayes, Steve Causey and Joe Weiss.

The Collision One Limited Stock division ran a special “Twin Race” format to make up a rainout earlier in the season. In the first 15 lap feature, it only took James Givens 5 laps to grab the lead. In lap 4 Givens jumped to the outside of both Chad Champion and Ryan Hutchens to grab the lead. The top three pulled away from the field with Givens holding off Champion and Hutchens. On the final lap, Hutchens made it three wide coming out of turn 4 but Givens held him off at the line. Rounding out the top five were Ryan Hutchens, Chad Champion, Cory Bradley and Ernie Dettbarn.

In race #2 for the Collision One Limited Stocks Bill Hardman and John Hankins Jr. led the field to green with it going four wide for the lead. Hankins would lead the first lap but give up the top spot on lap 3 to Cory Bradley. Bradley would lead until his spin in turn 4 that saw Ernie Dettbarn flipping in turn 4 bringing out a red flag. That handed the lead to James Givens with Ryan Hutchens moving to second. On the final restart, Givens pulled away from Hutchens to drive away for his fourth win of the season. Rounding out the top five were Ryan Hutchens, Randy Hutchens, Trent Clemans and Chris Champion.

Competitor gates for Saturday, September 2nd will open at 4 pm with spectator gates opening at 5 pm. On track activities will begin at 6:30 pm with hot laps.

Race fans can go to www.vamotorspeedway.com to view the complete schedule Virginia Motor Speedway’s 2017 season, find detailed event information, get the latest news, and get complete ticket and camping information. In addition, fans can get social with Virginia Motor Speedway by following @vamotorspeedway on Twitter, clicking “Like” at www.facebook.com/VaMotorSpeedway and on www.youtube.com/VaMotorSpeedway.