Posted on August 9, 2017 by Justin Kern Leave a comment

Jamaica, VA – It was Joey Polvoy once again parking his #51 Modified in WhosYourDriver.org victory lane this past weekend during Essex Concrete night at Virginia Motor Speedway, but it wasn’t easy for the current division points leader. Polevoy told the crowd on hand in victory lane after his 30-lap feature that the team found a broken part on the car and would start the feature from dead last. Lance Grady (#48) of Hanover, Virginia would lead the field to green with Mark Parks (#10) of Lynchburg, Virginia lining up just to his outside.

At the drop of the green flag, Grady looked to take command of the race opening up a ten-car gap on second pretty quick. Parks would run into some issues through turns one and two and fall all the way to the rear and eventually behind the pit wall. That would hand the second position over to Bret Hamilton (#121), who would eventually have issues of his own that would regulate him to a fifteenth place finish.

The first of many cautions came on lap number four when David Kendall (#16) went around in turn four and collected a little bit of the outside wall. Joey Polevoy had already made his way back up to the seventh position. An ace on the single file restarts, Polevoy was able to rocket his way all the way up to the fourth position by the time entered turn one. It only took Polevoy thirteen laps and a few restarts to work his way around Lance Grady to take sole possession of the lead. Grady would eventually run into some issues of his own and would have to settle for a thirteenth place finish.

Hunter McClendon of Williamsburg, Virginia, started the feature in the sixth position, started to turn the wick up just past the halfway point of the race. Picking up where the two left just a couple weeks ago, McClendon kept Polevoy honest in the closing laps and even more honest on the multiple late race restarts. Francis Jarelle (#01), Tim Schulte (#10S), and Mike Reynolds (#112) would round out the top five finishers. 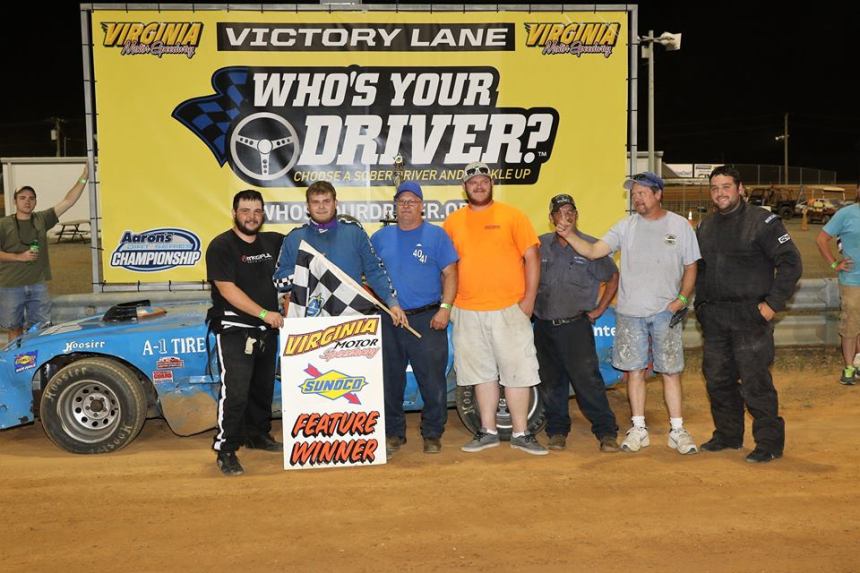 The Collision One Limited Stock 25-lap feature wrapped up the evening and wound up having some of the best racing of the night. James Givens (#8) and eventual winner Corey Bradley (#41) spent most of the race battling door to door for the win. Current points leader Ryan Hutchens ran into issues each time the caution flag waved when a fire broke out under the hood of his #14 machine. We were hearing in the press box a hole in the oil filter was the culprit. Crews extinguished the fires and sent him back out several times to finish the race, however, would be regulated to the tenth position.Givens made one last stab at the lead on the final lap trying to take Bradley on the outside through turn two but it wasn’t enough to and Corey Bradley would be able to hang on for his first career win. James Givens, Marty Coltrain, Chris Champion and Stephanie Johnston rounded out the top five finishers.

Givens made one last stab at the lead on the final lap trying to take Bradley on the outside through turn two but it wasn’t enough to and Corey Bradley would be able to hang on for his first career win. James Givens, Marty Coltrain, Chris Champion and Stephanie Johnston rounded out the top five finishers.Virginia Motor Speedway will return to racing on

Competitor gates for Saturday, August 12th will open at 4 pm with spectator gates opening at 5 pm. On track activities will begin at 6:30 pm with hot laps.