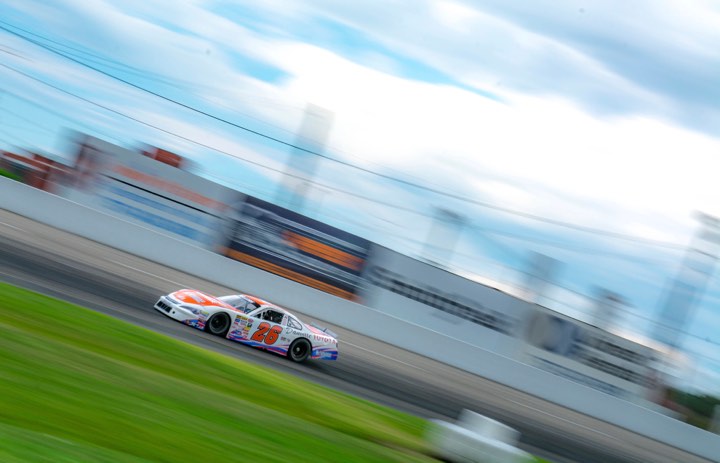 Hampton, VA – It was a busy afternoon Friday at the famed .395-mile flat track known as Larry King Law’s Langley Speedway. Coming off the heels of a spectacular Thunder Road Harley Davidson 200 at South Boston Speedway – race number one in a three race series known as the VA Triple Crown – teams have converged to the Hampton Roads racing facility looking to build a notebook for the highly anticipated return of the Hampton Heat 200. With twin Late Model features on the books for this weekend, it will be a perfect shot for teams who don’t run at Langley on a regular basis to get a lay of the land so to speak.

Previous NWAAS National Champs, Phillip Morris, and Peyton Sellers, were just two of the drivers who made the trip out east on Friday to see what set up they can put together. For those who may not have known or don’t remember the July 1st race at South Boston [Philip Morris Wins Thunder Road Harley Davidson 200 at South Boston Speedway], Peyton Sellers dominated the first 100-laps of the show before the eight car invert put him back in the pack and left to deal with some very hard racing. Phillip Morris, on the other hand, ended up in an epic battle with Langley’s own, Nick Smith, and ultimately came home the victor. Stacey Puryear, who had an outstanding race last weekend, as also made the trip to Hampton along with Austin Thaxton.

This weekend those same teams will mix it up in the Napa Auto Parts & Whelen Night at the races bringing together some of the best Late Model Stock Car drivers on the east coast. Greg Edwards and Nick Smith are looking to bounce back from their lackluster finishes the last time they ran twins while Matt Waltz will look to extend his newly found points lead over Justin T. Carroll. Mark Wertz & Brenden Queen are both coming off top ten finishes last week at South Boston and are looking for their first wins at Langley Speedway this year.

Multiple National Champs, multiple regional champs, and multiple track champs all in one location this weekend for TWO 66-lap races. Is there any other place you should be tonight?

Late Models are not the only racing that is on tap for this evening. The Pepsi Grand Stocks will be running 33-lap features along with the Cycle City Corps Legends & Bando’s. The evening will be wrapped up with the ever exciting Bojangle’s Enduros. Gates and Practice open at 2:00 PM. Green flag set to drop at 7:00 PM. The Weekly Racer will have LIVE, lap-by-lap coverage over on our Twitter feed – @theweeklyracer starting with the first LMSC race. Check out tonight’s full schedule bellow.