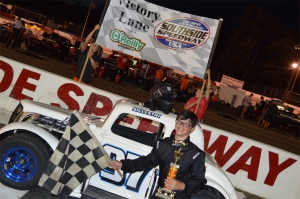 Cody Carlton once again showed his speed in the new car he is running setting a 15.462 second lap just edging Daniel Silvestri by .005 seconds for the pole point. Cody pulled a five on the invert and this put Carter Weedon in control of the field coming to the green. Off the start Weedon fell back pretty quickly as Tommy Jackson Jr, Chris Lilly, and Silvestri. The race was full of bumper to bumper racing between the top-3 in most of the race creating some very exciting racing for the fans. Daniel Silvestri passed Lilly, second in national Semi-Pro points, for the lead with five to go. He was able to grab his first legends win in his rookie season after winning the bandolero track championship last year. 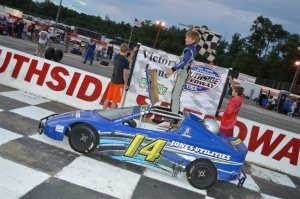 Franklin Caricofe ran a 17.182 around the banked 3/8th mile track to get the bandolero pole point and Conner Jones qualified in second. With the two in a row win rule in effect at Southside Speedway he would be sent to the rear to start the race. Jones, 4th in national bandits points, made quick work of the field jumping up to third in two laps, second place two laps later, and took the lead on lap-8. Cole Bruce who started second fell back to 6th and made a spot up to 5th before the checkers flew.