Hampton, VA – Fifteen Late Model Stock Cars converged on the .395-mile oval of Langley Speedway Saturday for 100-laps of action packed racing. With the points battle taking an interesting turn two weeks ago when the current leader at the time, Greg Edwards, suffered a DNF allowing for the top four to five drivers to gain ground.

Matt Waltz, 27 of Newport News, was the fastest man in town as the sun began its slow decent behind the turn three tree line. Posting the fastest lap of the fifteen cars in attendance at 15.964 (89.075 mph) – ironically enough out of the fifteen cars that took time Waltz was the only car to break into the fifteen-second bracket. Justin T. Carroll, Nick Smith, Connor Hall, and Greg Edwards rounded out the top five starters.

When it was time to go green flag racing Waltz jumped out to an early lead and honestly looked quite comfortable in setting the pace. Within the first fifteen laps – seems that Fifteen is the magic number here this weekend – Waltz had wheeled his #2 Chevy out to over a full second lead over the #12 of Nick Smith. The first twenty-eight trips around the famed Langley Speedway saw plenty of action and passing. One driver to highlight was the #55 of Mark Wertz who was forced to start shotgun on the field after breaking a rear axle exiting pit road for his qualifying lap.

The nights first of five cautions came on lap 28 for debris that was creeping into the racing groove just out of turn four. The debris appeared to come from the #26 of Danny Edwards, Jr. who had some left front damage from contact that we were not able to witness. Edwards took advantage of the caution period to come down pit road to the attention of his crew to make the needed repairs.

We attempted to get back under green flag conditions but was almost immediately slowed by another yellow flag when Justin T. Carroll went for a spin in turn three. The spin was just the beginning for one of the worst nights at Langley Speedway since he has been making the trip. Carroll would eventually retire from the race early due to suspension issues after blowing two separate tires – the first coming from when he and Edwards, Jr. touched wheels as they raced off turn four.

Greg Edwards ran into more issues on the ensuing restarting forcing the team to a second DNF in a row. He, Waltz and Smith, were racing hard into turn four battling for the lead when Mark Wertz tried to get a piece of the action after working his way up to the fourth position. The slightest of contact from the nose of the 55 to the rear quarter panel of the 97.3 The Eagle Machine got Edwards upset on corner exit. Chasing the car all around the track Edwards almost looses it at the stripe in front of his brother. Just when we thought Greg had it under control he gets rear-ended hard by Craig Estep, Sr., both drivers were done for the night. Justin T. Carroll had some impressive evading skills to keep the fenders clean and avoid the wreck but he did blow a tire.

Once the race got back to green things seemed to calm down just a bit and we saw some great racing action from about fourth on back. Plenty of action with drivers closing gaps, making passes, etc. Things started to heat up between Mark Wertz and Nick Smith around lap 65. The two drivers went back and forth for position until the yellow flag bunched the field up for, get this – essentially an exciting fifteen-lap shoot out.

Not only were the top three trading the lead they appeared to be trading plenty of paint. Leaning on each other and setting each other up for some wild passes. At least three times we were three wide either coming off turn two or entering turn three. Wertz would eventually fade from the battle after what looked like tagging the wall a bit coming out of turn two.

This left Matt Waltz and Nick Smith to race it out to the checkers. Waltz looked poised to finish things out but Nick Smith was certainly not making it easy for the pole-sitter. Smith was able to pull up to the rear quarter as they two came to take the white flag then it was a drag race down the back stretch. With Smith to the inside of Waltz, the two sailed it off into three. Smith’s car drifted up the track midway through the corner making contact with Waltz and forcing him up the hill. The contact upset the handling for Waltz and he had to chase the car to keep it from spinning allowing Nick Smith to get away and steal the win. Danny Edwards, Jr., Connor Hall and Mark Wertz would round out the top five finishers after 100-laps.

“That was some good ole short track racing there,” Smith said in victory lane after the race. “We didn’t have the best car tonight; Matt by far had the best car here. Just them restarts, we were able to keep our tires cool.” 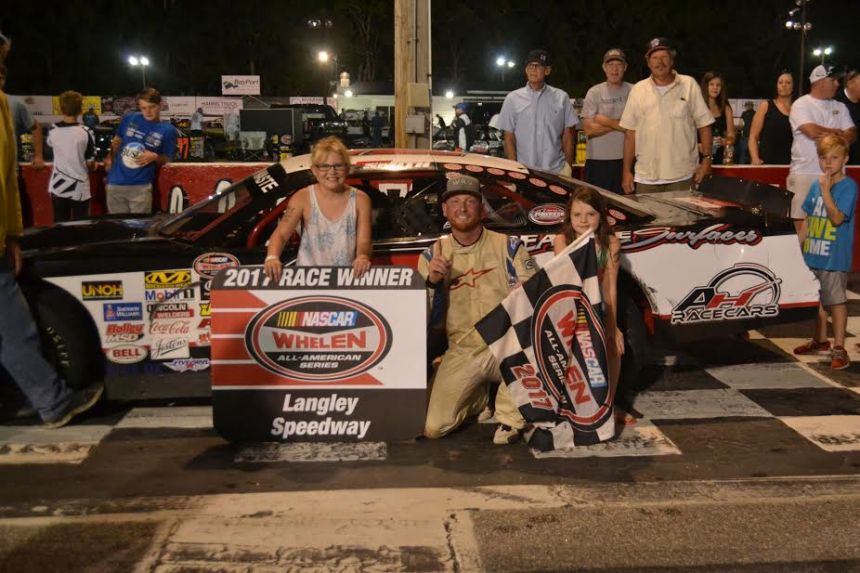 Nick Smith entered the weekend fifth in points with one win and just eighteen points behind leader Justin T. Carroll and just thirteen points out of second. With both Carroll and Edwards having DNF’s Smith, Waltz and Wertz will surly close the gap even more. Langley will be back in action Saturday, June 10th with Modifieds headlining the show. Late Models will return to action with twin features on June 17th.