Burbage would lead until eleven laps in when Matthews passes Burbage up as he seemed to struggle and was falling backwards. Wesley Johnson wound up in second place but couldn’t gain any ground on Matthews. At lap-25 a competition caution was thrown and Burbage would set up behind Matthews for the restart.

Burbage runs Matthews hard into the corner shoving him up high and causing mayhem behind him coming out of two. Louis White ended up rear end first in the turn-3 wall after already wrecking in almost the same spot earlier in the day and Wesley Johnson had a flat tire and stopped on the front straight to not damage the track or car.

After a brief red flag period to get the cars off the track safely the race restarted with Burbage out front, Matthews in second, and Jeff Shifflett trying to get by Tyler. Farther back Johnson was coming through the small field quickly after getting a new tire mounted on his machine. On lap-42 Ryan Haddock spun out and set up a restart that most could have predicted would be crazy.

Matthews falls in behind Burbage and dumps him going into turn-1, payback for earlier in the race. Burbage turns it around and starts going BACKWARDS on the race track in an attempt to wreck Matthews on the front stretch after the caution is out. He gets sent to the end of the longest line and Matthews keeps his position. Burbage made quick work of everyone in front of him and finished second behind Matthews, and then he tried wrecking him again after the race was finished. Matthews took the longest Kuliwicki victory lap I’ve ever personally seen and ended up nose first towards Burbage. In victory lane Burbage was visibly upset but track promoter John Vick was able to calm him down eventually. Wesley Johnson was able to finish third after having his tire go flat and starting at the rear.

Mike Cooper qualified on the pole with a 16.534 second lap. As the green flag flew Travis Roberson made quick work of Cooper passing him on the outside and jumping out to a second and a half lead. James Horner gets by Scott Lawrence on lap-10 for fourth position and by lap-15 the field was stretched thin. Lawrence came down pit road to end his race on lap-22 and two laps later Horner also has some problems that ended his day. Roberson cruised the rest of the way to take the checkers. 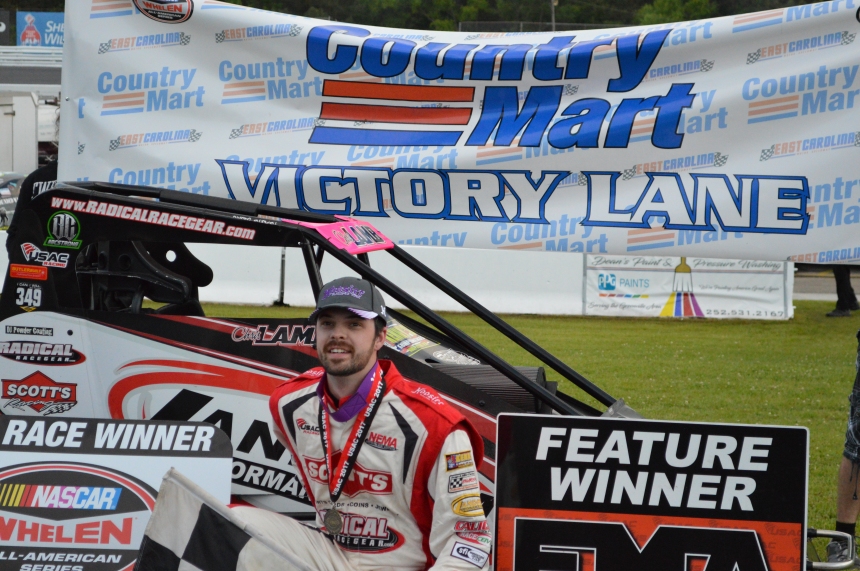 Nine USAC midgets came together for a very fast and entertaining 35 lap feature. Brandley Riethmeyer ran a quick 15.067 second lap to grab the pole over two time 2017 winner George Kurtz. Riethmeyer led until lap-19 when Chris Lamb worked his way from starting fourth to take the lead passing Kurtz and Jessica Bean in the process. Lamb would cruise to the win with Kurtz and Bean finishing second and third.
Late Model Results