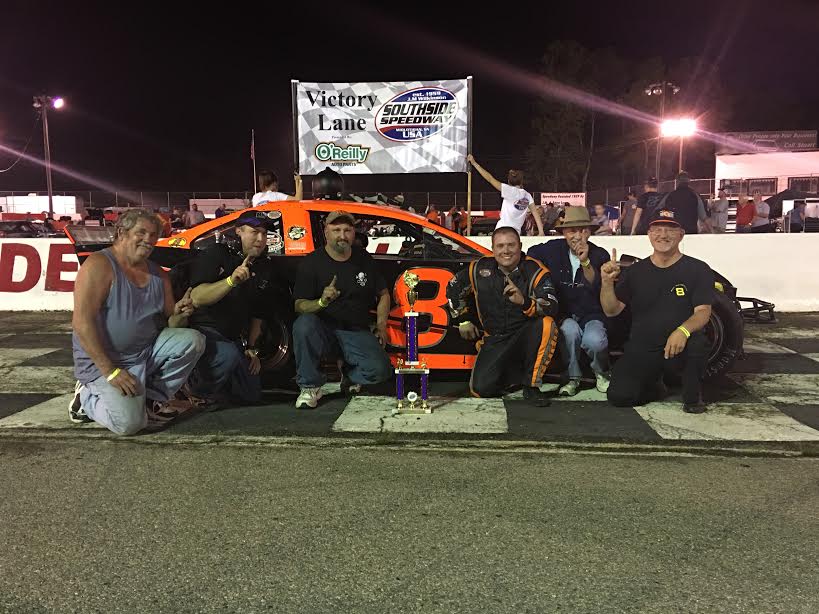 Midlothian, VA – Mother Nature tried to ruin the start of the weekend with a brief rain shower over Southside Speedway. Track officials and track crews, however, had better ideas. After about an hour-long rain delay we were able to get back to racing at the “The Toughest Short Track in the South” for a night of racing that proved to be beyond entreating for the fans. The IMCA style Modifieds – a TWR favorite – proved that it’s not always quantity over quality.

Eight open wheel cars showed up this past weekend for their scheduled 30-lap feature. Mike Rudy once again was the fastest car on the speedway while Kyle Wood looked to collect his second win in a row. During the final practice session – which if you are not familiar with Southside, the track uses the final practice session as a group qualifying session as well – Mike Rudy posted a fast time of 14.826-seconds which once again earned him the pole. The pill draw would have other ideas forcing the Prince George driver to start fifth on the grid handing the lead over to Michael Johnson.

Took two attempts to get the racing underway in the modified division after Tyler Davis – who was starting on the outside pole – had a bit of a mishap on the initial start and spun in turns one and two. Once things were sorted out and we were green Kyle Wood took things into his own hands and took the lead on the outside. Wood focused on setting a steady pace while a few cars battled for position behind him and Mike Rudy made his way up through the field.

The race was slowed only one more time early in the race when Tyler Davis dropped a heavy dose of water on the track going into turn one. Causing Lauren Edgerton to make a B-line for the outside wall. Rookie modified driver Matt Morgan did a great job as well to keep his car off the wall. Davis, who has not had much luck this season so far looked to be done for the night.

When the race went back green it was a Kyle Wood and Mike Rudy front row. As everyone got into a solid rhythm the top two cars checked on the field. Rip Salomone, who was the third fastest car in qualifying, was right where he started the race in third working his hardest to track down the top two. He was able to do so within the closing five laps on the race when Rudy and Wood started racing hard.

With the laps winding down, Rudy gave a big shot to Wood as they entered turn one with just three laps to go. Kyle Wood’s car went into dirt track mode as Rudy and Salomone backed off the throttle to allow Kyle to gather things back up. By the time the 19 was facing in the right direction again, Rudy had gotten a great run off turn two and made the pass for the lead. Salomone tried to work around Wood for second but he just did not have enough to make it happen and would have to settle for third.Dan Rogers kept the 2017 winning streak alive this past weekend in the Grand Stock division after laying down the second fastest time in qualifying. Austin Dodge was able to beat him out by .011 second to win the pole position. However, Dodge and Rogers would switch spots on the starting grid after the invert was complete.

Dan Rogers kept the 2017 winning streak alive this past weekend in the Grand Stock division after laying down the second fastest time in qualifying. Austin Dodge was able to beat him out by .011 second to win the pole position. However, Dodge and Rogers would switch spots on the starting grid after the invert was complete.

The two would remain nose to tail throughout the entire race, which can be seen on replay over on our Facebook page. Dodge did try to make a pass on Rogers as they approached lap traffic towards the end of the 30-lap feature creating a drag race down the front stretch. Rogers just seemed to get off the corner a little better and grabbed his second win of the season by just .063-seconds at the line.

The Modifieds and Grand Stocks will return to action, along with all of the great divisions, on Friday, May 12th for Scout Night. Head over the tracks Facebook page and website for more details