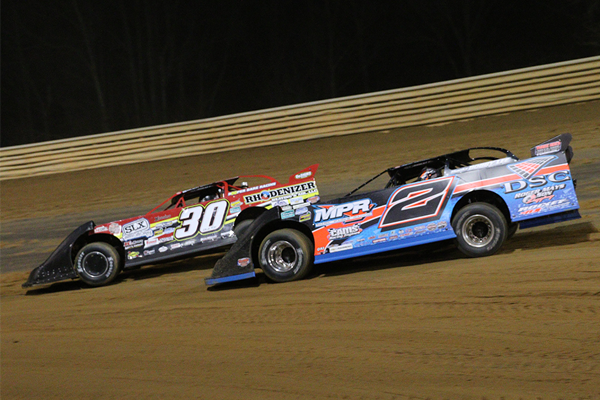 Jamaica, VA – Clear skies and cool temperatures produced some fantastic racing on Rappahannock Community College Night presented by WRAR / WNNT at Bill Sawyer’s Virginia Motor Speedway. In the Victory Lap Pro Late Model feature it was a pair of champions going at each other for the opening night win as Tyler Bare of Rockbridge Baths, VA held off Justin Williams of Concord, VA over the last 10 laps to take home the win in dramatic fashion.

Several times Williams pulled up alongside Bare to battle for the lead but each time Bare would hold Williams off. The two diced through lapped traffic staying within inches of each other. On several occasions, the two made it three wide with a lapped car bringing the fans to their feet. In the end, Bare was able to hold off Williams by .218 seconds at the line.

“I feel like a just ran a two hundred lap race, the track was in great condition for having so much rain yesterday,” commented Bare in Whos’YourDriver.org victory lane. Bare added, ”those last few laps were intense as we worked through lapped traffic and I have to thank Justin (Williams) for driving me clean.”

In other action Brett Atkins of Saluda, VA held off Tim Shelton of Fredericksburg, VA for the Truckin Thunder Sportsman win; Joey Polevoy of Powhatan, VA survived two of his own spins to come from the rear twice to win the Budweiser Modified feature and in the Collision One Limited Stocks Ryan Hutchens of Providence Forge, VA wrestled the led from James Givens on lap 8 to grab the lead and eventual win.

In the Budweiser Modified 30 lap feature, Joey Polevoy grabbed the lead from Jeff Solinger on lap 2 and looked to be stretching the lead out until he spun while leading on lap 10 as result of a flat right rear tire. Polevoy would join the rear of the field and would scramble his way back to the front. On lap 22 he spun once again relegating him to the rear of the field for the second time. By lap 28 he was battling with Briand Dobie and Mike Reynolds for the second when his car jumps a rut and collected the other two drivers. Polevoy kept going as the caution came out. On the restart, Polevoy worked inside Tim Schulte for the lead taking over the top spot with one lap to go. Polevoy would take the win with Schulte, James Sparks, Francis Jarrelle III and Jeff Solinger rounding out the top five.In the Truckin Thunder Sportsman 30 lap

In the Truckin Thunder Sportsman 30 lap feature, it looked like Michael Hayes would lead from start to finish but on lap 26 something broke on his car sending him for a spin and to the infield. That handed the lead to Brett Atkins who had to fend off fast qualifier Tim Shelton who worked his way to the front again after two early spins. Atkins would take the win by seconds. Rounding out the top five were Shelton, Steve Causey, James Snead and Chad Beahr.

The Collision One Limited Stock feature may have been the most entertaining race of the night. It took James Givens just two laps to come from his fourth place starting position to grab the lead from Corey Bradley with Ryan Hutchens following into second. On lap 8 Givens and Hutchens traded some paint as the two battled door to door for the top spot. Hutchens would emerge with the lead. Givens tried to get back around him but would bring out a curation and send him to pit road for repairs.

The Speedway will return to racing next Saturday, April 8th and host one of the country’s premier events for dirt late models the $20,000 to win Aaron’s King of the Commonwealth presented by Essex Concrete. The event is sanctioned by the Ultimate Super Late Model Series and will also include a $3000 to win FASTRAK Racing National event for Pro (Crate) Late Model competitors. Many of the Mid-Atlantic’s top talent will be on hand going for the big payday. This is one event you will not want to miss.Admission price for adults is only $30, seniors (60+) $25; military (active/retired w/ proper I.D.) $20, students 11 – 17 years old $15 and children 10 and under admitted free. Pit passes will be $40.

Competitor gates for Saturday, April 8th will open at 3 pm with spectator gates opening at 4 pm. On track activities will begin at 6:00 pm with hot laps.

Race fans can go to www.vamotorspeedway.com to view the complete schedule Virginia Motor Speedway’s 2017 season, find detailed event information, get the latest news, and get complete ticket and camping information. In addition, fans can get social with Virginia Motor Speedway by following @vamotorspeedway on Twitter, clicking “Like” at www.facebook.com/VaMotorSpeedway and on www.youtube.com/VaMotorSpeedway.