Thornburg, VA – Seventeen Late Model Stock Cars made the trip to Dominion Raceway opening their sophomore season with the CARS Tour Series. A beautiful, sunny, Saturday afternoon witnessed some of the best racing Dominion has seen in its growing history. For the first time in CARS Tour history, both series ran twin 75-lap features for a total of 150-laps. Race control used a qualifying format we were introduced to in 2016 with the driver’s first lap dictating where they would start in race one while their second lap determined where they would start in race two.

Brandon Grosso, a relative rookie to asphalt racing, set the fastest time of the day at 15.082 (95.478 mph) with his second lap to grab the pole for race two and bragging rights to the fastest car in qualifying. His 15.340-second first lap put him eleventh on the board for the first race – Myatt Snider would claim those honors with a 15.113 (95.282 mph) second lap.

When it came time to wave the green flag Myatt Snider showed everyone really quick why he was the pole sitter in race number one. Clearing Jr. Motorsports driver, Josh Berry, as the field exited turn two turned into a high-speed follow the leader chain race with Josh Berry and eventually Jeff Oakley. Oakley, one of the two home track drivers making their CARS Tour debut, got around last year’s tour champion Deac McCaskill and reeled in the top two with almost ease. With the help of a quick caution period, Oakley was able to get around the #88 machine of Berry and started to put a lot of pressure on Snider.

Just past the halfway mark is when things started to get really fun up front. Oakley was finally able to stick his nose under the #2 of Snider and the two would trade the lead of the race for a couple laps before Snider was able to get back in front of Oakley and somewhat put the cruise control button back on – for now. It was not like Oakley was out of it, though, battling back to the rear bumper of Snider – maybe backing off to allow the tires to cool down – got into the #2 car a little bit causing both drivers to chase their cars up the hill.

Things got incredibly interesting with just eight laps to go when Michael Hardin cuts a right front tire down forcing a caution over the field. On the ensuing restart Snider, as the control car elects to restart the race on the outside. This allows Oakley to gain the lead back in what was looking like to be his first CARS Tour victory. Oakley and the field would have to weather a few more restarts, one that would not serve so good for both Myatt Snider and Josh Berry who would make contact multiple times fighting for the podium finish. Snider and Berry would make contact in turn one that would send Berry around and to the back. Race control felt Snider’s efforts earned him a one-way trip to the rear of the field, effectively ending both of their chances.

The final restart would leave Layne Riggs and Jeff Oakley on the front row. Riggs was not messing around when the green flag was waved. Taking a look under Oakley and making brief contact. The contact was enough to send Oakley up the hill and allow McCaskill to get by. Deac turned up the wick in the closing laps reeling in Riggs and stuck his nose under the 99 out of four. Riggs, on the high line, seemed to get back to the gas a little quicker and beat Deac McCaskill to the line in an epic drag race. 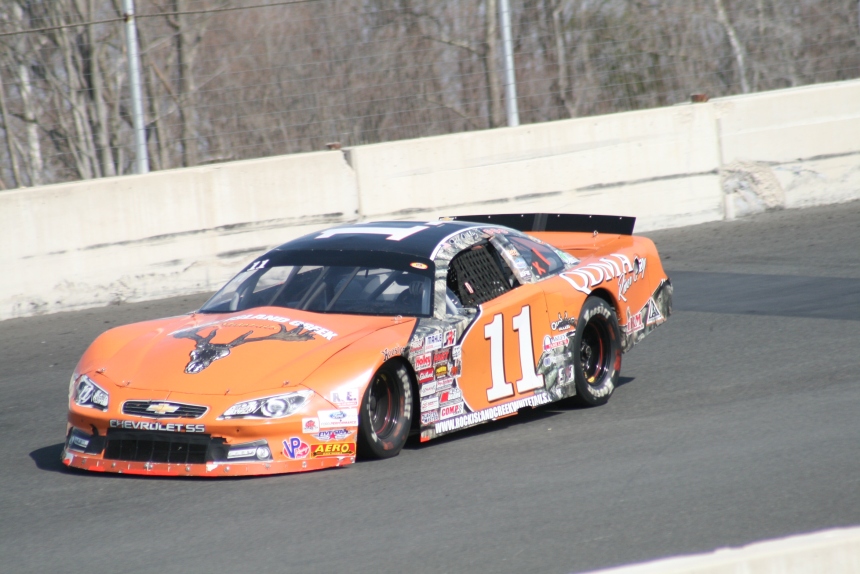 Brandon Grosso, as mentioned above, was supposed to start the second race from the pole position but, due to an incident in the first race and some damage received, he did start the race from the back of the pack, handing the front row over the Josh Berry and Jeff Oakley. When the green flag was displayed Jeff Oakley wasted absolutely no time getting to the front of the field. Possibly using experience from his time here last year, Oakley powered around Berry on the high line finally taking over the top spot – something he tried so hard to do in the first race.

Finally running in the top spot with Berry hot on his tail the Prince George driver received some help when Berry pulled down to pit road and nose first into his stall ending his shot at a second consecutive week with a victory. This was the break Oakley needed and would eventually start pulling away from the field.

The battle for the second position stayed pretty interesting all race long with Jared Fryar working to off off charges from Riggs, McCaskill and even Myatt Snider. However, Sniders night would come to an end early due to a broken wheel stud on his machine.

Grayson Cullather, the youngster from Southside Speedway just a little ways south of Dominion, had a great showing early on in the race. Working his way into the top five running right in the tracks of Deac McCaskill hoping the two cars in front of him would slip up and he would find himself in the second position. A couple of late race restarts would regulate Cullather to a seventh place finish for the second race – two top ten finishes in his first CARS Tour appearance.

Things started to get really interesting when Brandon Grosso started to work his way through the field. Picking cars off one at a time as we reached the closing laps of the race. Working his way around Cullather then running down McCaskill, one could argue if the race would have stayed green he was going to be your second place finisher. However, just as he was working around McCaskill for the third positon the field was slowed after Craig Stallard got extremely loose out of two and came to a stop against the outside wall.

This set up a thrilling green, white, checkered finish that saw Jared Fryar give everything he had and then some to try and get Jeff Oakley loose to steal the victory. However, Oakley was the victor after a second drag race of the night to the checkered flag. Deac McCaskill looked to be the biggest loser of race number two and somehow ended up in the outside retaining wall between turns three and four and was unable to continue. With our vantage point of the race and the race to the finish, unfortunately, we were unable to see what caused that particular issue. Fryar and Riggs would finish second and third while the two biggest movers of the entire day, Brandon Grosso, and Anthony Alfredo would round out the top five.

The CARS Tour will take almost a month off before heading back to North Carolina for the Orange Blossom 300 on April 22nd at Orange County Speedway located in Rougemont, NC. For more information on race times and ticket prices please visit http://www.carsracingtour.com. For those who would like to see a replay of tonight’s race as well as future broadcast of CARS Tour races, head over to carstour.tv.