Posted on October 11, 2016 by Justin Kern Leave a comment 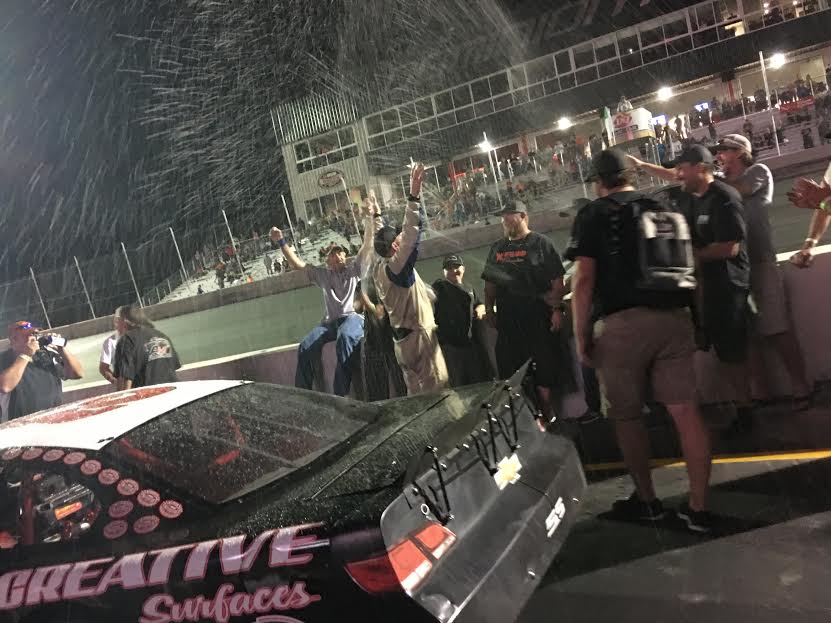 Nick Smith celebrates with his crew on pit road after his second place finish during Dominion Raceway’s season finale locked up the track championship in a big way. (Justin Kern/TheWeeklyRacer.com)

The saying better late than never has never been more appropriate for the story of Nick Smith winning the inaugural Late Model Stock championship at Dominion Raceway located in Thornburg, Virginia. For those of you who don’t know, The Weekly Racer is a growing operation with writers that follow the paths much like the drivers we cover. Race track/car junkies by weekend, hard working folks during the week. My desks have been so slammed at work it took me some time to get to finish up this story.

However, the season Nick Smith has had at the newly opened Dominion Raceway has to speak for itself. With twelve wins on the season, that’s six times more than anyone else on the season, Nick Smith is finally able to call himself a NASCAR champion.

“It has been just been an unbelievable year!” Smith said in an interview after the race. “We didn’t start out to run for state and national points till the end of the summer. The last month and a half there we realized that we are kind close to this thing. We got a late start with all that but like I said we never set out to win a National title but sometimes those are your best years when you stick to realistic things and keep a basic goal and go out there and win races. That put us in a great spot.”

Smith entered the weekend with a comfortable lead of Doug Barnes, Jr. who had captured a couple wins throughout the season and simply just needed to finish the race to lock up the title. However, that’s not Nick Smith, he wants to go out and win every race – as every driver should.

“I was still a little upset about not winning the race that night,” Smith said. “The championship hadn’t quite soaked in yet you know. I gave it everything I had and sometimes you just come up a little short.

The 150-lap season finale saw an interesting format with two separate breaks, three completely different sets of laps and two separate inverts – one of which were voted by the fans. Smith’s car could be found at the front of the field during all three segments and really looked like he could have been the car to beat.

“We were right there at the end, track position is so important here we got shuffled back a little bit and I got held up for about five or six laps. If we could have had those laps back I think I would have had something for him. We finished right there on his [Oakley] bumper after running him down a straightaway. I know I had the car to beat we just came up a little short but its been one of the best years I have ever had.”

Smith twelve victories at Dominion Raceway – which averaged at least eighteen cars for most of the season – was a huge factor in Smiths position both in the Virginia State points as well as in the Nation. With just twenty-one starts on the season, less than half of what eventual National champ Matt Bowling had – Smith was able to finish 4th in the Nation just 40 points back and 2nd in Virginia behind Bowling by just nine points.

“We definitely had a great car this year at Dominion and even ran South Boston once,” Smith explained. “We finally got ourselves a track championship with Bob and After Hours Motorsports, Billy Banks Racing Engines and Wes Page Shocks. They have been giving me the best that can give me and it’s just been an unbelievable year. I think the track has done the best they can do in their first year to give us a great place to race. We could go back and forth and pick on things here and there but I think overall they did a good job, it’s a really fun race track. Been some great racing and some of the hardest racing I have been apart of in a long time. Its just so much grip and room here you can race and really race hard.”

Smith went on to explain at the current moment he was not to sure what is going to happen next year and if his home track of Langley Speedway, which is just ten minutes from his house, would even open. Smith also told us he really enjoyed racing at Dominion and would certainly want to come back to run again.

Nick Smith will now switch his focus onto Martinsville – the largest Late Model Stock Car race in the Mid-Atlantic region. Largest field and largest single payday for teams, over $25,000 is up for grabs. With the team only having one car right now running the race will determine how well they did in last Thursday’s test. The newly crowned track champion stayed in the unofficial high 20’s bracket according to our stop watches Thursday afternoon laying down a best time of 20.89 seconds for The Weekly Racer which was right in the midst of what all the other teams were running as well. We fully expect Smith to make an attempt at this years Valley Start Credit Union 300 next weekend October 15th.