Posted on October 8, 2016 by Justin Kern Leave a comment 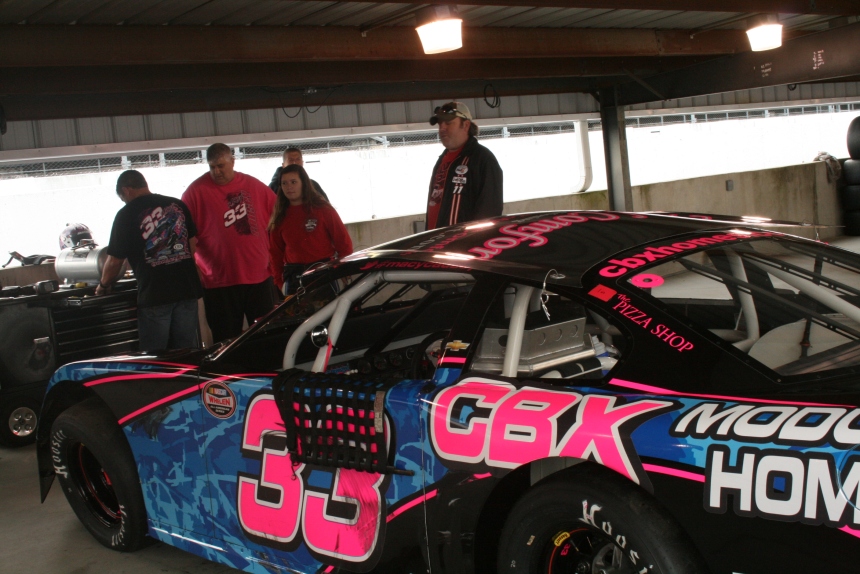 Macy Causey and her crew look over the car just before practice opened on October 6th. (Justin Kern/TheWeeklyRacer.com)

Ridgeway, VA – One of the most prestigious races of the year with the some of the largest payouts in Late Model racing is one sure fire way to attract some of the best Late Model drivers around. For most, winning the race would be the highlight of their career. For some, just making into the race is the victory that year. For others surviving the race and taking your car home in one piece is the goal. For young Macy Causey of Yorktown, Virginia, this year it’s a little different, this year she is looking for a little redemption. After failing to make the race in 2015 after issues in both her heat race and the last chance qualifier, Causey was forced to load up and head home early.

2016 hasn’t been one of the busiest seasons for Causey after her home track closed down, however, it has certainly been one of improvement. Not saying the young lady couldn’t wheel a car before but this year you have seen a new spark to say the least from the Yorktown, Virginia native. After being selected to return to the NASCAR Drive for Diversity program for the second year and a chance to compete for Rev Racing in either their Late Model or K&N programs, young Macy Causey is still attracting the attention of those in the Late Model community.

Making just her second trip to the famed paper clip, Causey has a new outlook on the race as well as some more help not only in the garage but also on the radio. “I think overall our 2016 season was very successful for not only me but our crew who has worked tremendously hard to get the car where it needs to be,” Causey said about her performance on Thursday’s test. “A Special thanks to Matt Waltz my mentor, he has put a lot of his time to get the car as fast as it was today! I learned a lot from today I realized that once u get running good and confident in the car your confidence yourself goes up like mine I’m looking forward to next week!”

Waltz, an up and coming NASCAR Xfinity driver and crew member for Obaika Racing, has been coaching Causey this season as well as help work on the set up on the car and it has shown. Not only in the performance of the car but the confidence of the driver. Causey was one of the fastest cars The Weekly Racer was able to unofficially clock throughout the day with a 20.43 second lap.

When talking with Macy after the conclusion of practice we learned its not just learning what the car wants that has made the team faster, but also the confidence the driver has gained over the year in her self that helped her lay down the lap she did. We asked her what were some of the things she took out of the Thursday session and what things she can take to next weekend.

“Mainly to just be confident in my ability,” Causey said. “Coming to the track today and letting the fact that I didn’t make the race last year get to me, I kinda thought well here goes nothing. Then we went out and practiced and were the fastest! So I just need to stay confident going into the combine and realize there is a reason I’m there and the talent is there and I can’t let my nerves get to me!”

Causey will have a lot on her plate going into next weekends VallyStar Credit Union 300 and hopefully plenty of seat time. Scheduled to attend Rev Racing’s Drive for Diversity in the coming week at Florida’s New Smyrna Speedway – all pending on how much damage was done to the speedway during Hurricane Matthew – from October 10th to the 12th then immediately shift her focus back to Martinsville and make the final tweaks to make the race this year.

“It’s very close,” Causey commented about her car. “We could use maybe get a tenth here and there but manly in qualifying I need to push myself cause qualifying is definitely my weakness.” For those who may be new to the race, qualifying time trials held on Saturday afternoon will determine where the drivers start in their 25-lap heat race. Come Sunday after noon 3, 25-lap heat races will be run and your finishing order in those races will determine your starting position on the grid – much like the Gatorade Duels at Daytona. The better you qualify the better your chances are in the heat races.

General Admission grandstand seating is $30 for adults and $5 for youth 12-and-under. Tickets can be purchased by calling 877.RACE.TIX or online at www.martinsvillespeedway.com.