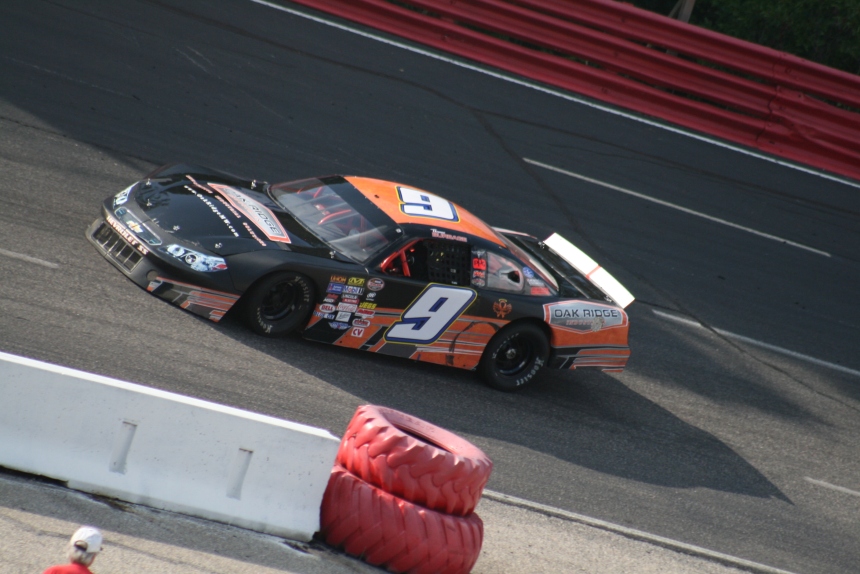 Robersonville, NC – “Man that was one of the most fun I have had in a race in a long time,” an excited Thomas Burbage said in victory lane the past weekend at East Carolina Motor Speedway. Burbage had shown speed all afternoon and it transferred to both qualifying and race time. Despite having minor scoring issues, that were fixed before race time, Burbage tied for the pole position with points leader Brenden Queen with a time 15.44 seconds. Burbage would have to settle for the outside pole after race control confirmed per track rules the “advantage” would go to the diver who clocked their lap first.

After an intense battle for the lead, Burbage was able to get around Queen using what a lot of people at East Carolina have a hard time using – the high line! “It’s hard to pass on the outside here,” Burbage also said in victory lane. “Specially with Brenden on the inside of you. He’s a good driver and he will certainly make you work for it. I’m just so happy to be out of this drought.” Things seemed to get off to a rocky start quite literally when flagman Terry Bullock did not like the original start, waiving it off calling for take two. There was however a large delay in the caution lights as the field set off into one causing the middle of the pack to stack up. Terry Carroll of Williamsburg, Va got the worst end of that deal and ended up nose first into the outside wall. His night was over before it even had a chance to get started.

The field was reset and would make a second attempt at the start. This go round was much better and the field went to work out of two. Burbage wasting no time applying pressure to Queen to his inside. The two put on quite a show for the next three laps with Queen edging him at the line each lap. After getting some good heat in the tires Burbage’s car really seemed to hook up and that’s when he took the lead from Queen and never looked back.

There was a brief battle behind them for the third spot with Louis White, who is locked in a very tight points battle with Queen for the track championship, getting by Tyler Matthews and locking his sights on Queen for second. Michael Fose and Justin Carroll would also go to work for several laps battle for the fifth position. Carroll doing everything in his power to keep Fose at bay creating some pretty exciting racing for sure!

Couple interesting moments for the leaders working through lap traffic that could have ended worst than they did. Burbage ended up catching a pair of lap cars who were battling for position coming to ten to go. Luckily the two were able to sort things out and did not hold up the top two drivers. Louis White on the other hand had a scary moment in turns three and four that found himself chasing his car up e hill after making contact with Maddy Mulligan’s car who looked to push up the racing surface. White was able to gather things back up and Mulligan kept her machine straight to finish the race.

With nothing in his windshield left to worry about and Queen a safe distance in his rear view it was smooth sailing to victory lane. “Man I’m tickled to death to be back in victory lane,” Burbage told The Weekly Racer. “Specially with these bump stops man. This is the second race running these new bump stops and the car seems to like it.” Burbage finally made the switch from the conventional set up to he newly allowed bump stops a couple weeks ago. Ironically enough right after finding a shock had gone bad. “I just felt like I needed to go head and make that change,” Burbage told us about going to bump stops. “I needed to do something before we got to far behind.”

Burbage would go on to finish within the top five in the second 40-lap feature of the evening. Though it was not a sweep, a top five is nothing to shake a stick at. Burbage told us he just missed the adjustment from the first to second race but was pleased with all the hard work from his guys and his sponsor Oakridge Metals.