Thomas Stinson Back to Victory Lane in Wild Modified Feature 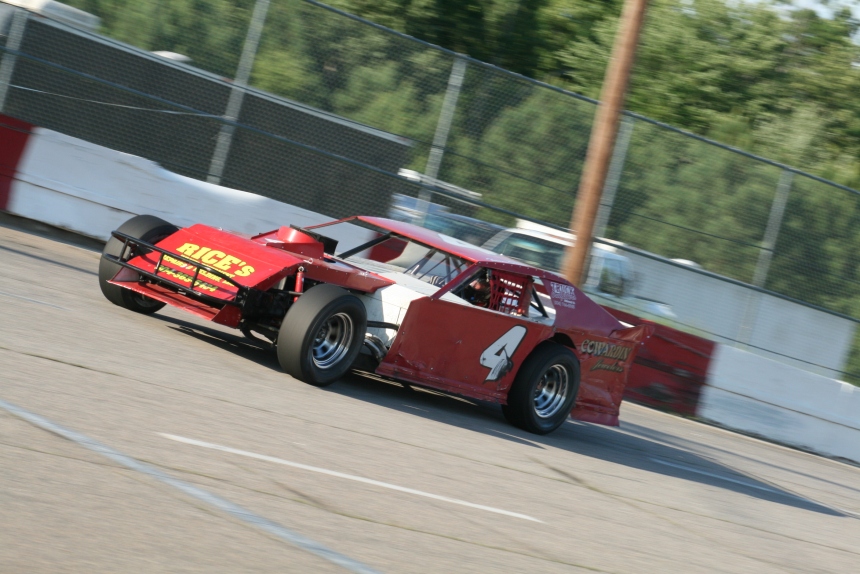 Midlothian, VA – With car counts struggling in the modified division region wide, just seven cars took time and started the race. Mason Bailey (#05) – 20 of Chesterfield, VA – entered the evening tied with Kyle Wood (#19) in the Modified division and set the fast time earlier in the afternoon in “practifying” clocking in at an impressive 14.705 second lap (81.597 MPH) around the 1/3 mile semi banked oval.

Warren Lipford (#43) was not to far behind him with a 14.775 second lap of his own. They were the only two drivers to hit the sub .7-second mark. Kyle Wood, Thomas Stinson and Tyler Davis rounded out the starting five. By the virtue of the Southside rulebook and the pill draw, Bailey would be forced to start fifth for the 30-lap feature. Handing the pole position over to Tyler Davis.

Stinson seemed to benefit the most from the invert, as he wasted no time no time working the outside groove battling Davis for the lead. He would be credit with leading lap one but the race would be halted shortly there after for a huge piece of debris that fell off the back of Lipford’s car – just the tip of the ice burg for him this weekend! It look like it was the entire left rear quarter and rear panel of Lipfords car that fell off.

On the ensuing restart Stinson elected to take the low line when the cone was displayed while Tyler Davis went high side. It almost looked like we were going to have yet another issue as Kyle Wood appeared to miss a shift and very slow to get going. We would later learn from officials that Wood’s crew was claiming they were being pushed by Bailey as they were coming to the green.

Back under green flag action, Stinson picked up right where he left off at the front of the field with Davis and Lipford in tow. Bailey and Wood did not look as if they were making up to much ground on the leaders, however, that may have come from the fact they were racing each other pretty hard – these two were the battle of the night in our opinion.

A few laps later Bailey would go for a ride out of turn two to bring out the yellow flag. Did not see what took place as we were watching another great battle on the track between Edgerton and Bedner. The ensuing restart is when things got really crazy. With Thomas Stinson and Tyler Davis electing to stay down low, Lipford and Bedner try their luck topside and that is where things got a little crazy!

Warren Lipford and Tyler Davis exit turn four coming to two laps to go using each other up. Both drivers leaning on each other plenty. The two look to touch wheels and Lipford, who was on the outside, gets turned up and into the wall. When I mean up and into the wall I mean Lipfords car was up on two wheels, exposing the entire underside of his car as he tode the boiler plate into turn one colliding with one of the light poles and taking out the red/green light in turn one.

Good news was that both drivers were okay. Lipford actually jumped right out of the car and immediately started to evaluate his machine. Tyler Davis was actually able to drive his car away from the scene of the accident and down pit road to the attention of his crew. After an extended red flag for clean up and track management to evaluate the situation at hand, we were able to get back to racing action. Want to point out that Davis did make an honest attempt to make it back on the track but would almost immediately bring out another yellow flag – either a tire or suspension issue in the front of the car seemed to be the issue.

The yellow would set up a green, white, checkered finish for the remaining cars on the speedway. Thomas Stinson, who may not have been the fastest car on the speedway all day, but he was the most consistent and stayed up front all night long. Lauren Edgerton was able to edge a second place finish over Kyle Wood, Mike Bedner and Mason Bailey.

Southside and the Modifieds will be back in action two weeks from now on July 22nd. Pay attention to their facebook for ticket prices and updates.