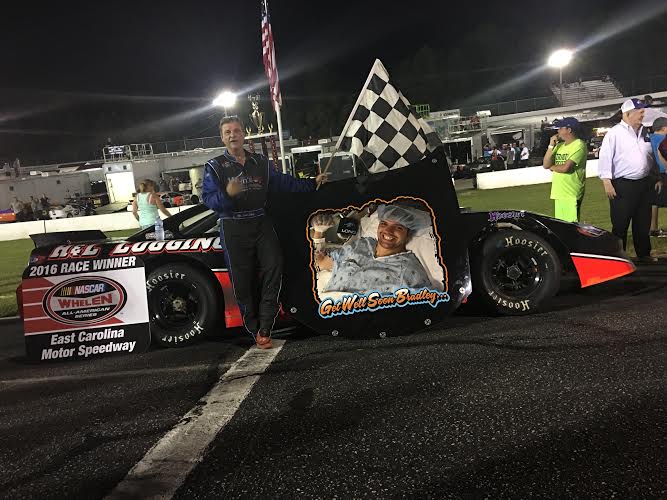 Louis White had the honors yet again of leading the field down to the green for race number two on the night after both of his laps were faster in time trials earlier in the afternoon. This time however, he was able to hold off the pack for a very special win for he and his team.

White had to deal with the likes of Matt Bowling and Michael Fose for most of the race but was able to hold them off for the advertised 35-lap distance. In a race that saw just two cautions, the first coming from Paul Williamson, had Louis doing a little bit of mirror driving twice as Bowling applied some pressure early but fell a bit off the pace citing some possible issue with the tires after that first caution.

The battle was on for the lead yet again later in the race after the second caution was brought out by the father son duo of Justin Carroll and Terry Carroll again in turns one and two. Terry looked to try and take the position away from Justin and when we looked back up Justin was going for a spin in two. Manage to keep things off the wall but caused Kenneth Mercer and Cameron Bowen to slow up as well.

Fose wasted not time in applying pressure to the rear bumper of Louis as the laps ticked down. “I think if we had a couple more laps to cool the tires down we might have had him,” Fose told us after the race. “The tires just got to hot and ran out of laps. Overall a good night, two solid finishes, kept the fenders on it, take it back to the shop make it better and try to win one.”

Not the greatest of nights for Brenden Queen, who entered tonight as the point’s leader, as well as Thomas Burbage, who was running in a barrowed car. Queen, who suffered a puncture in the left rear tire in race one was forced to start to the rear of the field for the second race and with only 35-laps was only able to battle back to sixth.

Burbage, who finished just outside the top ten in race one, had a bit of a oil leak that race officials made him come down pit road to fix. Spoke with Burbage earlier in the day and he told me the car just wasn’t set up right for his driving style and it didn’t respond to his inputs like he is used to. Eitehr way Burbage was able to earn points to at least keep him in the hunt for the points..

“We made a lot of changes on the car,” White explained in victory lane. “It was either going to make it better or make it worse. It was still a little tight but maybe it was better there than the first race, maybe Matt used his tires up some in the first race. Michael Fose actually had a better car than we did and he raced me clean. If it would have been any longer of a race I don’t know if I would have been able to hold him off or not.”

Just seven days ago Louis was up on top of friend and fellow racer Bradley McCaskill which tore a bunch of stuff up on the race car. We asked White despite what happened last week if this was the same car, we were pleasantly surprised to see his teams hard work paying off in victory lane.

“Im just tickled to death to win this race for Bradley,” White went on to explain. “I know he is tickled to death too. That’s what we wanted to do for him as he is still in the hospital up there in Chapel Hill, the night couldn’t have turned out any better for us unless we won both races. This is the exact same car from last week, its like I picked the car up and left my wallet there.”

Louis went on to talk about his team and his sponsors who helped get the car back together and back on the track.

“I have to thank Cory Smith with Country Mart and Jerry Smith, without him I wouldn’t be able to do none of this. He does all the set up and stuff on the car. Me him will argue back and forth sometimes on what we need to do, most time he makes the right call. With him and my wife for putting up with it and maybe a week from now when she sees that check I wrote she might be hollering but she’s happy right now.”