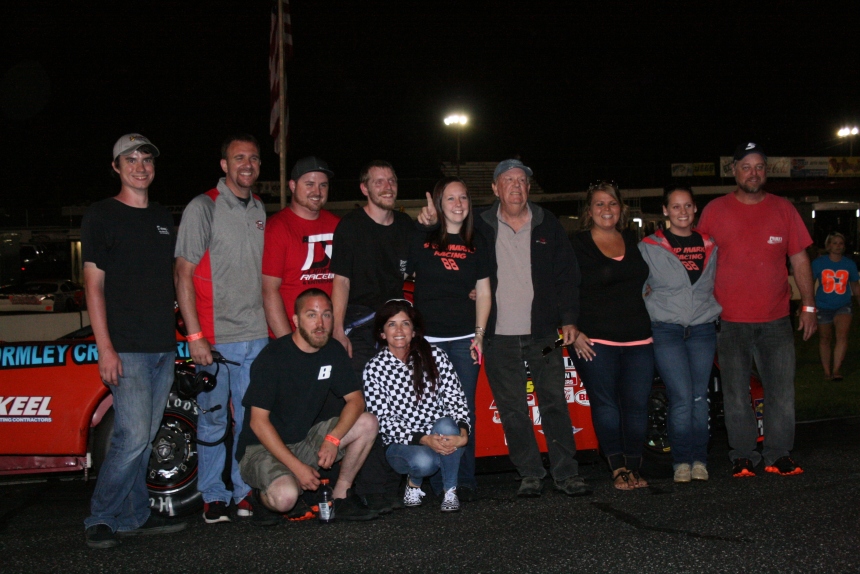 Moving up in the racing world can be both exciting and scary. Now imagine moving up to the Late Model Stock divisions and making your first career start at a track you have little to just about no experience at. What would be some good goals for you to set? Don’t qualify last? Don’t spin out? Don’t wreck the car? I am sure you can argue those are all pretty realistic goals your first night out. How about finishing coming home second in one of the races after battling break issues in the first? Probably not a bad idea right! Well, that is exactly what Thomas Marks, of Yorktown, Virginia did this past weekend while at East Carolina Motor Speedway.

Marks, who had competed the last couple years in the Grandstock division at Langley Speedway, thought it was time to graduate to the big boys this past season and bought himself a Late Model Stock. Not just any ole Late Model, a car proven she can make her way to victory lane and win championships – Greg Edwards old backup car simply known as “Ruby.” What Thomas didn’t know was going to happen was the lease debacle over his home track causing it not to open. This forced Marks to look elsewhere to get his racing fix.

Making just one prior start at the tricky 3/8th mile tri-oval in his Grandstock car, it was quite impressive to see him adapt to not only the car but to the track. He eventually would lay down the seventh fastest time in qualifying to set his starting position for the first of two thirty-five laps features. Break issues kept Marks from really pushing the car and figuring out what he had in race one regulating him back to a tenth place finish. A top ten finish in a full field of NASCAR Whelen All-American Series Late Models is still not bad! That issue would not be a factor in race two where Marks fought his way up to a second place finish. Just two races into is career and the only way to best his already best finish is to park it in the box, not a bad deal sir!

“I had start and parked the car for Greg Edwards at Langley twice, and I ran maybe a total of nine laps” Thomas said talking about his start in Late Models. “I didn’t have any practice tires but the Edwards brothers were kind enough to piece me together a set for the Saturday morning practice, they had at least 150 laps on them. The car was pretty balanced we made a spring change after the first morning practice. We ran the first official practice and the tires were just used up the car wasn’t giving me the feel or the input I knew it had in it so after consulting with the crew we decided to not practice anymore and wait to get our new tires for qualifying.”

Marks told us he was pretty excited with qualifying once the guys were able to get some new tires on it. Qualifying seventh out of the sixteen cars that took time in one of the tightest starting grids we had ever seen at East Carolina Motor Speedway, missing the top spot by just about .15 seconds. Looking to get some laps under his belt in the first race and used to running in traffic in a completely different style of racecar but the brakes had other issues. A major problem to have at a track like East Carolina too! During the break the crew determined the right front caliper had gone bad and dialed some rear break in the car to help Thomas out. “The second race was a blast,” Marks went on to tell us. “The car was hooked up. Brakes were a better but not great but the car handled well as it had all day and we were able to make a lot off passes and ultimately come home with a second place finish.”

Coming home tenth and second in your first official Late Model Stock Car race had to be exciting. Of course we had to ask what it must of felt like there in the closing laps to pick cars off one by one and work your way up to that top spot. Had to be pretty exciting?

“Yea it was,” said Marks. “I knew that they weren’t able to conserve there tires and were slipping and sliding everywhere so I just stayed smooth and got in a rhythm and set them up and picked them off one by one.”

Think it would have been a different story if you had a few more laps?

“[I] really wish we could’ve had five more laps or so and been able to battle for the lead. But congrats to Louis, he had a good car under him and was able to stretch his lead when me and Brenden were battling for second.”

Thomas Marks will continue to run at East Carolina Motor Speedway. Telling us he has plans to return to the high bank 3/8th mile oval in June – seeings how races this evening were cancelled due to rain. He also wants to try to make a few starts at both South Boston Speedway as well as the brand new Dominion Speedway in Thornburg. Make sure to head over to Thomas’ Facebook page to follow along this year as he learns what its like to be a Late Model Stock Car driver in the Mid-Atlantic.