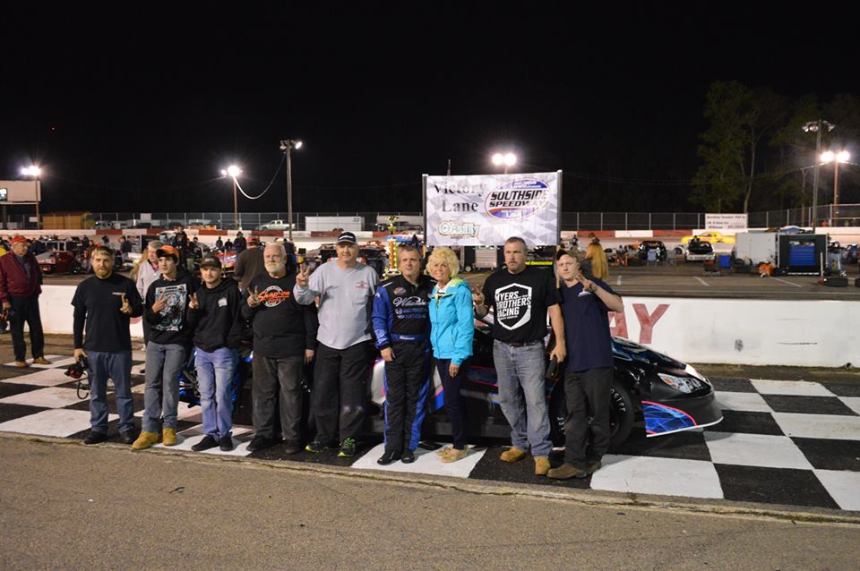 Chesterfield, VA – Twelve late models would line up to race Friday night at “The Toughest Track in the South”, Southside Speedway. Chris Dodson set the fast time with a 14.582 second lap in the euro qualifying session. Dodson pulled a three on the invert so he would start in third behind Brad Davis and Greg Fernandez.

Coming to the green flag Fernandez would show too much eagerness beating Davis to the start line and forcing a restart to the race. This time one lap would get in the books before Tyler Daniels would spin out on the back stretch.

The cone would come out with Davis and Dodson taking the inside lane with Fernandez and Zuskin up top. Brad got a great start pulling away from the field leaving Dodson to battle hard for second. Chris would clear Fernandez and set his sights on Davis. It would only take two laps for the 7-time track champion to get under Brad and take the lead from him. Fernandez and Davis would go side by side for a lap until the third caution of the night would come out.

At the restart Dodson would start to check out while Davis would fight hard on the high side with Fernandez. It took three laps for Greg to clear the 18 of Davis. Zuskin started to put some pressure on Davis until the fourth caution of the night flew for Kyle Wood dumping Daniel Thomas, Wood got an end of the longest line penalty. While the yellow was out Michelle Willingham’s car overheated and she parked it for the night.

On the ensuing restart Zuskin would get ahead of Fernandez for second before the fifth caution of the night flew for Cole Walker spinning out. Fernandez goes to the inside and Zuskin would pull to the outside of Dodson with the cone out. Zuskin would get down in front of Greg and the race would finish without any more stoppages.

After the race Dodson said he knew the car was strong enough to win, he just had to get out in front after the invert. He said he also plans on testing at Dominion Speedway soon and racing their next 4 tire race.

Grayson Cullather had a season best fifth place finish on the night. The rookie late model driver of the #22 Clearwater Pools and Spa Chevrolet said after the race that “The car was really loose, just fought a really loose car all night”. He is now tied with Tyler Daniels in points and for rookie of the year,