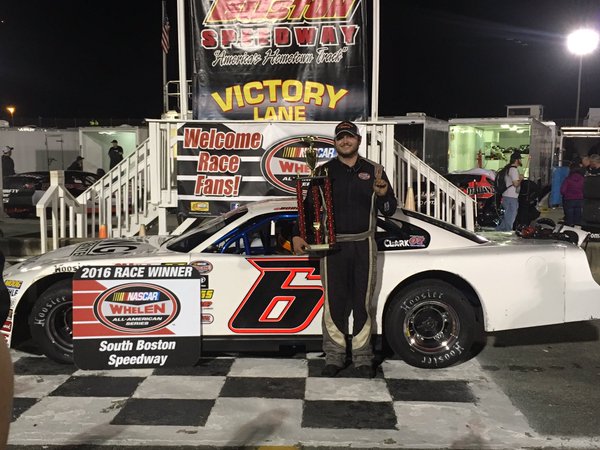 The win was the first of the season for McCarty, who became the third different driver to visit Victory Lane at South Boston Speedway in the track’s first six Late Model Stock Car Division races of the season.

For Willis, the pole winner, the runner-up finish to McCarty was his best career finish in the NASCAR Late Model Stock Car Division ranks. But, it didn’t come without its challenges, as he had to fight off several bids by eventual third-place finisher Mark Wertz of Chesapeake, Virginia, including one over the closing laps, to earn the spot.

McCarty, who led all but the first lap, averaged 54.359 mph in winning the race that was slowed by three caution periods.

Twenty-one cars took the green flag for the race.

Throckmorton, of South Boston, Virginia, swept the night’s pair of 25-lap NASCAR Limited Sportsman Division races, starting on the pole and leading flag-to-flag in the first race, and racing from his sixth starting spot in the nightcap to complete the sweep.

Saturday night’s sweep allowed Throckmorton to keep his unbeaten record at South Boston Speedway intact as he has now won all of the track’s first five races of the season.

David Latour Jr. of Clemmons, North Carolina was the runner-up in both races. Tommy Peregoy of Clarksville, Virginia finished third in the opener, with Mike Jones of South Boston, Virginia and Billy Myers of Hurt, Virginia rounding out the top five finishers in the first race.

Colin Garrett of South Boston, Virginia finished third behind Throckmorton and Latour in the nightcap for his best finish of the season. Peregoy and Jones completed the top five finishers in the second race.

The win by Mayo was his first of the season, while Layne’s win in the second race was his second victory in the division this season.

Pickrel finished third in the nightcap to earn his best finish of the season to date, with Phillips and Mayo rounding out the top five finishers.

Justin Dawson of Nathalie, Virginia took the lead from Kenny Mills Jr. of Alton, Virginia with seven laps to go and won the night’s 15-lap race for the Budweiser Hornets Division.

The win made Dawson the division’s fourth different winner in as many races.

Next Race At South Boston Speedway

Adult General Admission tickets are $10 each, with youth ages 7-12 admitted for $5 and kids ages six and under being admitted free with a paid adult.

For additional information about the NASCAR Late Model Twin 75’s racing program or any other events at South Boston Speedway, please visit the speedway’s website at www.southbostonspeedway.com or telephone the speedway at 434-572-4947 or 1-877-440-1540.