Well guys and gals, it is about that time of year again. Time to put a cap on 2015, burry it into our time capsule for future generations to look back on. Take a look back ourselves at all the good times that we had. Think to ourselves what the next 365 days are going to be like. Make plans to make this year “our year.” I myself as a person have them same aspirations, The Weekly Racer has those same aspirations as well. We have already posted a few interesting stats from WordPress taking a look back throughout 2015.

Last year, our first full season covering short track racing, we ended the year with a little post highlighting 14 of the best photos from the year that we took (Fourteen of the Best Photos from 2014). Looking to create a little tradition here at The Weekly Racer we are going to kick off our 2015 Year End review with 15 of the best photos – in our opinion of course – that we were able to snap throughout the year. Bellow, in no particular order are the photos we have chosen. We still want to hear from you though. Post a comment bellow the story with who you think had the best looking car from the post. If you think someone should be on the list let us know!

A young man we first met last year in the PASS South SLM Series. This year we came across this young man again in the inaugural CARS Tour Series running a Super Late Model. Take the fact that Super Late Model’s are pretty sweet on their own accord, there was just something that stood out from this paint scheme. The car was hands down just bad ass looking on the track – the black, white and red combo was just the right amount of simple. 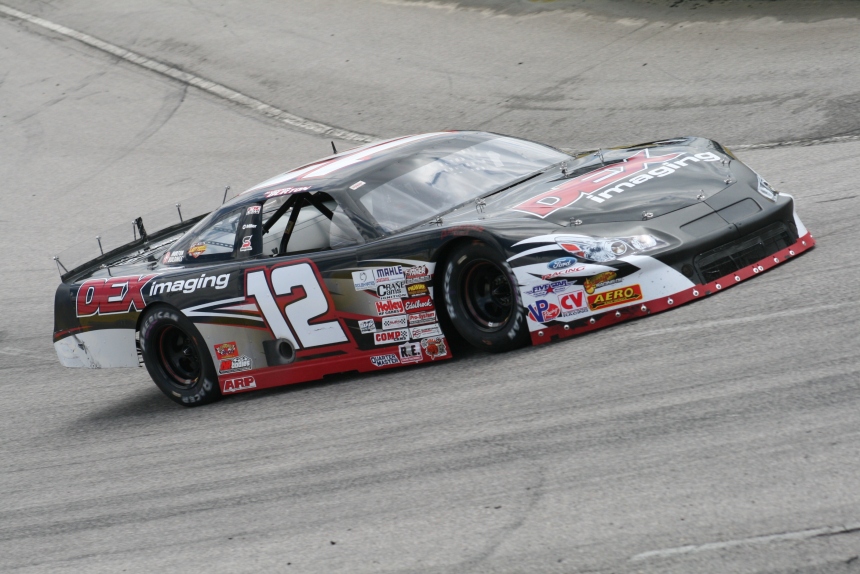 It really doesn’t take many words to describe why Dustin made the list this year right? In a division that we honestly do not cover enough, which is something maybe we can look to change in the future, this young man and his race team sure know how to race in style. Looks is not the only thing Dustin had going for him in 2015 as he was a top competitor at East Carolina Motor Speedway. I have to say the number style has got to be my favorite feature on the car, wouldn’t matter what color scheme they choice it would have come out sweet. 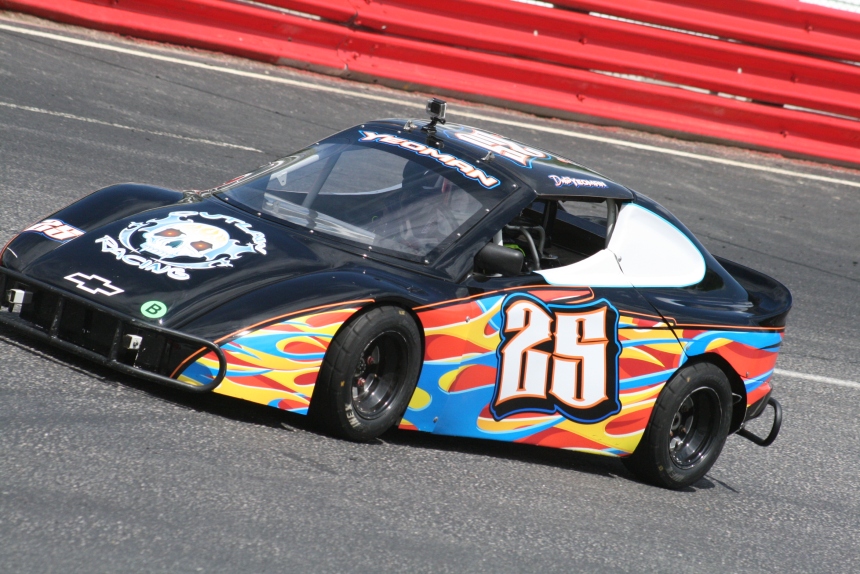 Running in the Sportsman division out at South Boston Speedway, Preston McGee makes our list this year with his sponsor driven machine. With Safe Side Tactical on board it was a clever idea to have the sides of the car covered in what looks to be bullet holes. I do have to admit though that was the only part that didnt really appeal to me. Other than that with the combination of the number style, color combo, and wrap this one certainly stuck out in our eye throughout the entire evening.

Okay lets be honest, you could pick this car out in the middle of a fog storm while you acid washed an in ground pool (sorry for the pool humor, but if you have ever pressure washed a pool with acid you would know the thick hazy cloud I am talking about). The fact that this car look amazing day or night with the neon yellow/green sides and black top, it was the teams dedication to coordinate their attire that helped set everything over the top. Seriously though, Wyatt’s spotter  Jimmy Gaulding, some of the best looking and color coordinating shoes on the NWAAS circuit. We love it!

Arguably one of the best looking stock cars in the Mid-Atlantic! Bradley McCaskill – Owner of Grafix Unlimited, who have provided some of the best looking wraps around –has displayed quite a few wraps this year that could have made this list but this one stuck out the most. The black and green combo in my opinion, looked best under the lights!

Dominated the UCAR division at Langley Speedway in 2014 before making the move up into the Pro Six division. Though I am not a Mustang guy myself, its hard to find something not slick about this car. Proving that sometimes simple is not always a bad thing. The white on black body with black numbers and white highlights really stuck out to me this year earning its spot in our top fifteen.

Built from the ground up this past off season Jesse Council brought one of the slickest looking Street Stocks to the table this year! This car was not only bad fast and sounded great on the track it looked equally as badass. I liked the idea to have white as the primary color with the black highlights unlike what most drivers do with the black body and white highlights. The red numbers and accent lines really make the car pop onto our list of top schemes. 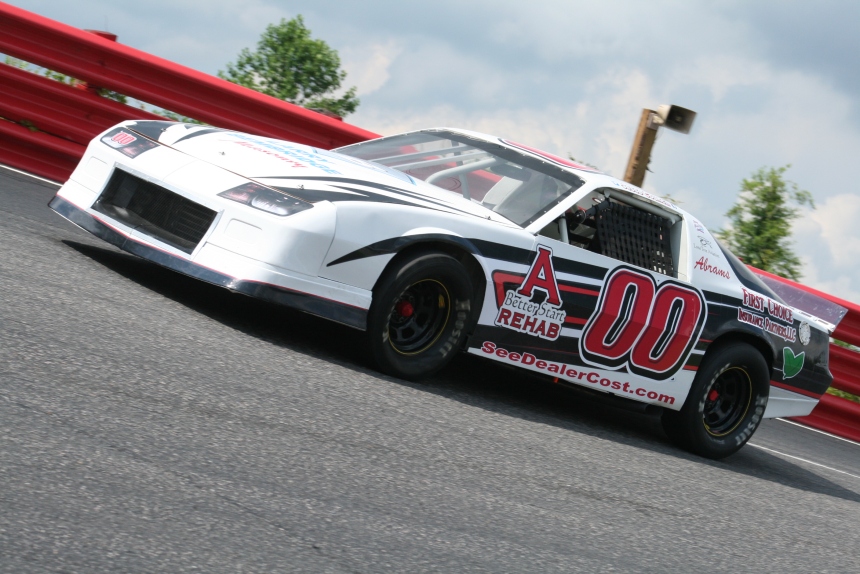 In a divison I have loved since heading out to my first Saturday night short track race just about any Legends car looks good to me. Going back to the idea that something simple is not always bad, the way the orange looked along side the white doors. Safe to say that cars with stand out colors are what catch my eye and my camera lens.

Making his debut for Kyle Busch Motorsports in a Super Late Model in the CARS Tour back in April, Kaz Grala was sporting a plan black and white Super. I know there is a lot of people out there that will argue that a black car is a cop out and its boring. I think it was the number style that earned this Toyota Camry on our Best of 2015 list of paint schemes. 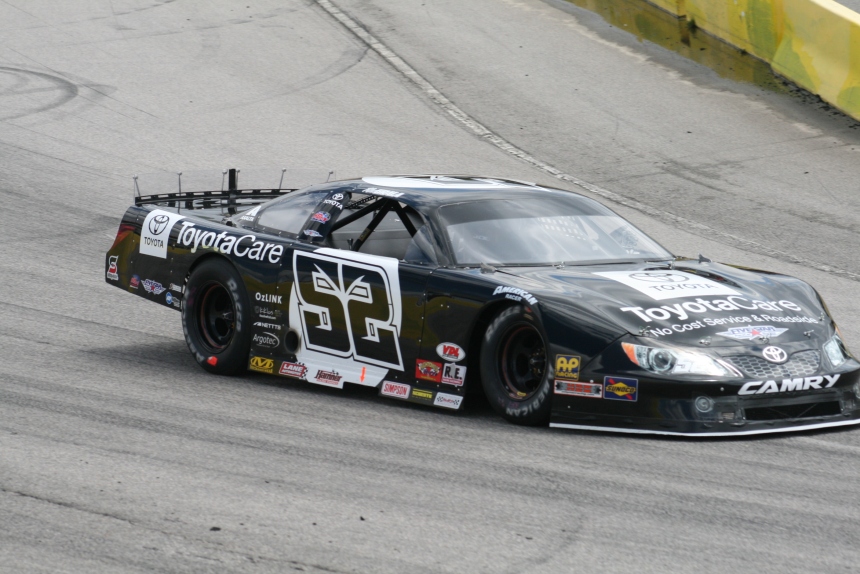 A simple two tone, red and white paint scheme on a Celica earned “Buckshot” Jones a spot on our list of paint schemes. The number decal with the steel diamond plates were a pretty sweet edition as well. Plus it didnt hurt that the car was just bad fast at just about any track it pulled into.

It’s almost like sensory overload right? I say nah!! Lemons started sporting this awesome wrap, done by Grafix Unlimited, halfway through the season. Got to take a trip to victory lane at Martinsville this year as well.

Getting a little bit of a later start in the year after taking the time to build the car the right way. Carter hit the track sporting one of the newer body styles for the modifieds. Again sticking with the simple two to three color design, Carter earned his spot on this years list representing the modified division. 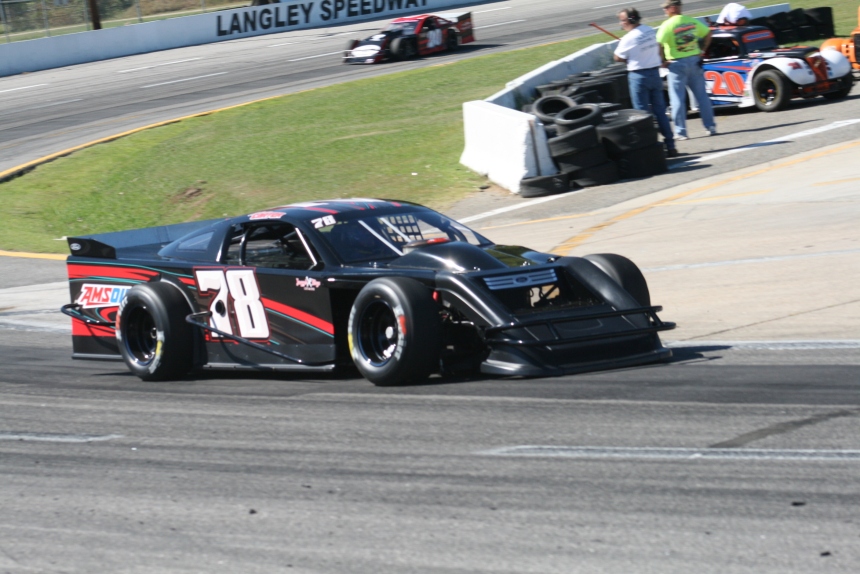 Winner of the inaugural CARS Tour LMSC Series Brayton Haws’ black and red Rheem machine with out a doubt earns a solid spot on our list of top 15 cars. You can never go wrong with the white, black, and red color combo. It is always great to see a team not only put a fast machine on the track but pay attention to the details. A+ for sure in our books.

At first I wasn’t one to really like the “new school” bodies that were being used in Langley Speedway’s Grandstock division. However, after a while things start to grow on you and your thoughts and opinions change. Running one of the new Camaro bodies, much like ones used in the Xfinity series, Marks eagle wrap and color scheme was something that always looked good around the track. 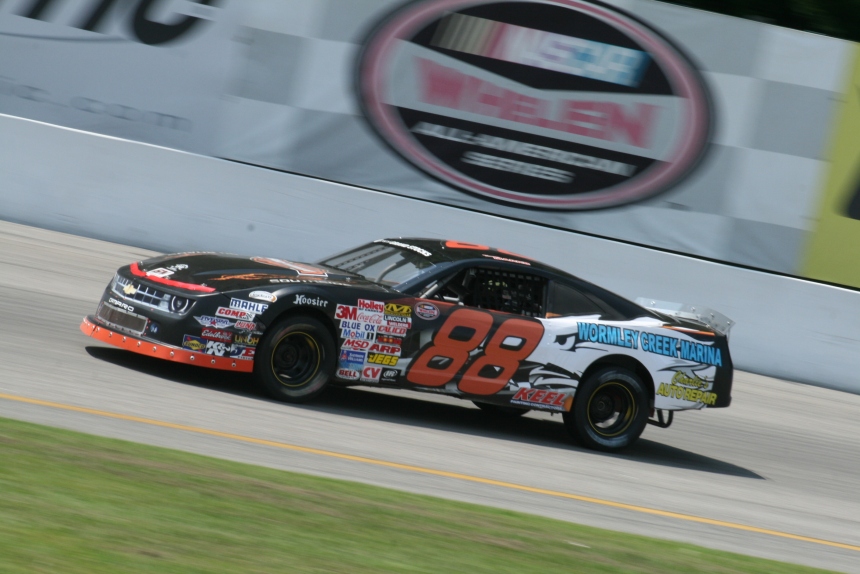 Last but certainly not lease this year is the entire Southern Ground Pounder Modified touring club. A touring division operated pretty much by the drivers, take some slick looking old school open wheel modifieds and put on one hell of a show. I started looking around at some of the cars and really couldn’t pick just one so we decided to honor the entire club. If you haven’t had a chance to see these guys in person make it a point to try and check them out in 2016. You will not be disappointed.