23rd Annual Myrtle Beach 400 Comes To A Head This Weekend

Posted on November 18, 2015 by Justin Kern Leave a comment 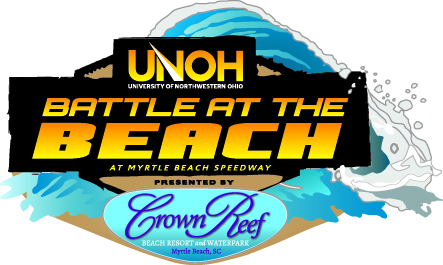 Beach week… the moment every high school senior looks forward to throughout the year in my neck of the woods. This weekend, as long as pesky Mother Nature plays nice, we will wrap up the Late Model Stock Car version of beach week. For years the Myrtle Beach 400 has been an iconic even on the NWAAS .563-mile track. This year the event is no less prestigious, as the University of North-Western Ohio has come on board this year to bring the Battle at the Beach – formally held at Daytona International Speedway for the past two season during speed weeks – to bring you the UNOH 400 presented by Crown Reef Beach Resort.

The best of the best will yet again pack up and head down south to duke it out to see 1. Who is better at tire management and, 2. Who will take home the crown! Past races have already proven that it takes a special type of driver to bring home the goods. With $15,000 on the line to win you can only imagine how tough the competition is going to be this year. Bellow is the track supplied pre-entry list for this weekends event where you find 2015 Myrtle Beach Speedway LMSC track champ Sam Yarborough, 2012 race winner & 2014 NWAAS National champ Anthony Anders, as well as a handful of competitors from Langley Speedway again this year.

Though the list found bellow is nowhere near complete, as it does not match the prestige of the event, there are a few names right off the bat that you should keep an eye on once the green flag waves Saturday. (In no particular order)

You never ever sleep on the hometown crowd. Great racer or not, nothing is able to replace seat time and experience around a track. Just so happens Yarborough is classified under the great racer category. After coming so close to winning the 2014 edition of the MDCU 300 in Martinsville, Yarborough came back strong in 2015 to collect thirteen wins along the road to his track championship

Your inaugural CARS Tour LMSC Champion has certainly torn things up during the 2015 season. He certainly has proven himself an extreme player in the game grabbing three wins on the CARS Tour schedule, which has been stacked with talent all year. Haws is also coming off of a top five finish at MB Speedway just a few short weeks ago. Telling you now, do not take your eyes of the #41 car this weekend!

Edwards locked down his fifth career track championship this year at Langley Speedway beating his brother by the virtue of a “Total Win” tiebreak. This year has proven to be a test on both driver and team as they dominated early in the season, had to rebuild the car from the ground up after a hard wreck, and deal with bad luck throughout the end of the season. With probably one of the most dominate cars of 2014, Edwards was forced to settle for a second place finish after botched restart with twelve laps to go. Edwards comes into 2015 looking for redemption.

Jr. Motorsports driver Josh Berry has been… well should I say “should be” at the forefront of most LMSC media and drivers mind this year. Coming down to Langley Speedway and grabbing a win his first time out, running in the top five all night long at RIR in the Xfinity series, as well as grabbing three wins in the CARS LMSC Tour – with his most recent win coming at none other than MB Speedway.

Though not on the registered drivers list as of yet its hard to bet against Lee Pulliam not running in the most prestigious races of the year. Doesn’t matter if Pulliam is registered for the race or not, he is still a threat to win! The 2013 race winner wrapped up his third NWAAS LMSC National title this year and came extremely close to going back-to-back at Martinsville Speedway. Not only do I see Pulliam running the race but being there at the end competing for the win.

Fresh off a win at Martinsville Speedway, arguably the largest race in the Late Model community, Lemmons has proved he can just about win at any track under any circumstances. Though 2015 hasn’t been quite what the veteran driver had hopped for, short track racing is with out a doubt a momentum type of sport. Lemmons is not the type of driver to fold under the pressure of big races in fact he is quite the opposite. Look for the 27 car to hover around the front all day long looking to capitalize when the time is right!

In addition to the 200-lap Late Model race we will have the honor of watching a 125-lap – $7,500 to win Modified feature! These open wheel ground pounders will be very similar to the NASCAR Southern Mod tour where both Jason & Burt Myers will compete for the win. Rumor has it (I say rumor because I have not been able to confirm) that the track will move EVERYTHING to the schedule for Saturday due to the threat of rain Thursday. Moving the practice day to Friday, giving teams plenty of on track time. The Weekly Racer will be there for the first time in our history to bring you LIVE lap-by-lap coverage of both features! Stay tuned to our Facebook & Twitter page for updates on times as we hope to be able to bring you to qualifying as well as heat races.