Posted on November 29, 2015 by Justin Kern Leave a comment 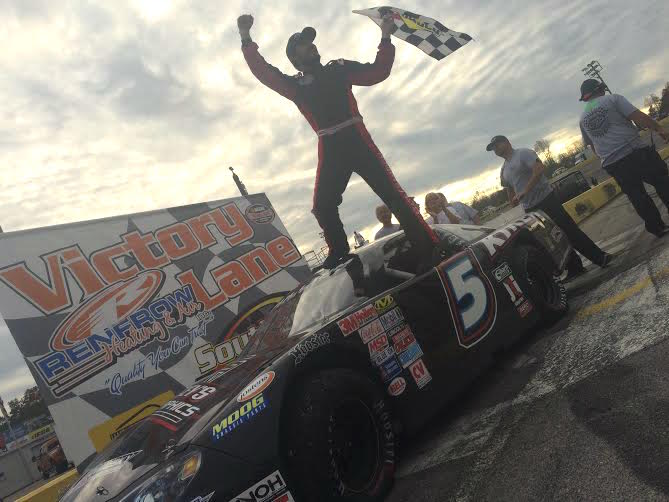 Kenly, NC – The field was set for the 15th running of the Thanksgiving All-Star Classic hosted by Southern National Motorsports Park. A race that has slipped through the grasp of multi time NASCAR Whelen All-American Series National Champ Lee Pulliam. After winning his third national title, fifth South Boston 200 race in a row, finally winning the Hampton Heat 200, Pulliam set his sights on the VA Triple Crown, All-Star Classic, and the unofficial “Grand Slam” of Late Model Racing.

Pulliam, a threat to win at just about any track he pulls into, has an extensive notebook and plenty of laps to boot here at SNMP so you knew he was going to be strong. Setting the third fastest time in group qualifying Saturday afternoon and holding that position during the heat race, that is where he rolled off for today’s 200-lap feature event.

Once the green flag was displayed to the field it almost looked to get ugly and fast through turns one and two. Pole sitter Tommy Lemons, Jr. got a tad bit squirrely through the corner. With the quality of drivers behind him, they all allowed him gather himself up back up and get to some pretty good green flag racing. Pulliam would actually spend the first quarter of the race hanging out in third just biding his time before he would make his move to the front, the caution on lap 50 would help with that as it allowed him to take the inside of the cone and restart right on the bumper of race leader Tommy Lemons.

Pulliam would spend the next twenty-five laps sizing up his opponent; making what looked like “mock runs” on the race leader figuring out what move to make to take the top spot away. Finally pulling the trigger out of two as the field worked lap 74, Pulliam pulled even to Lemons door and it was a drag race down the backstretch. With the top groove just about non-existent here this weekend, Pulliam was able to motor his Kiker Tree Services #5 Chevy to lead at lap 75 and never looked back!

END_OF_DOCUMENT_TOKEN_TO_BE_REPLACED

Posted on November 29, 2015 by Justin Kern Leave a comment 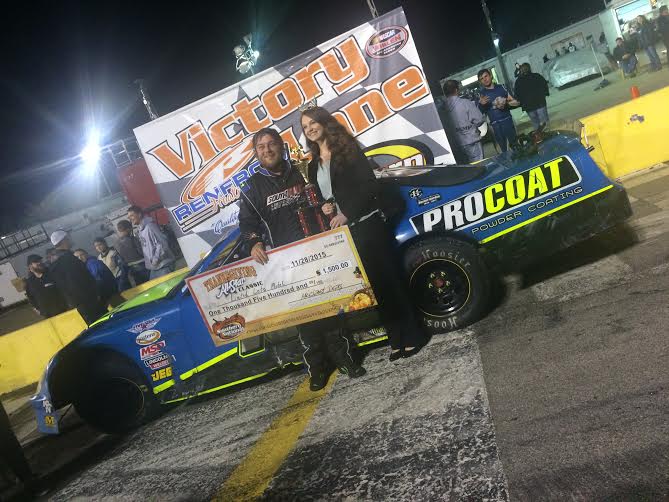 Kenly, NC – You would think the theme was “Yellow” for Day 2 of the 2015 Thanksgiving All-Star Classic at Southern National Motorsport Park. No, not because a majority of the cars were yellow, or the track did some kind of yellow out commonly found at football games. It was more so due to the fact the yellow flag wave four to five times as much as the green and checkered flag – combined. Now that’s no real fault of the track, its just the nature of the game when you put big money, contingency awards, and bounty’s out in multiple divisions. Money draws cars and cars draw cautions. Honestly though, how can you be mad at thirty plus Legends and over twenty UCARS?

Not only the nightcap but also the headline of night number two, the Limited Late Model division. True Limited’s mind you, not the hybrid division created and run this past season to help cut cost and drive car counts. A total of 18 cars showed up for this weekend’s big event while only 16 cars finished the race. Clay Jones, qualifying on the outside pole, bested only by Ronald Renfro, wasted no time early grabbing the lead and running away with things. Louis White, who has always been a very strong car took over second just as fast and he too almost never let go.

Thankfully the divisions only caution of the night came early from a solo spin down low in turn. To this moment I still have not been able to confirm who exactly it was – I know bad media person! Thought we were going to run into some trouble on the ensuing restart as Renfrow – who elected to use the cone and restart in the second position – got the restart of his life. I was all but ready to see the caution lights come back over the speedway. Guess that’s why I stay downstairs in the media booth and let Mr. Ellis handle the heavy stuff upstairs. We stayed green for the rest of the race and watched some pretty intense battles for position through the field.

Jones, who had honestly been the class of the field all night, said in victory lane after the race that he was glad there were no more cautions. “We had a great car and took off a little snug and got going and I kind of burnt the right rear up trying to stay in front. I was just hanging on right there at the end,” said Jones. “They kept telling me Joe was coming but I was just doing all I could to stay there. Thank God there wasn’t a caution. I can’t thank these guys enough. They put a rocket under me again. They’re making me look good. I can’t thank them enough.” It looked like Louis White was a shoe in for the runner up position but a late race slip up out of two made him chase his machine up the hill and allowing Joe Heigl to get by.

END_OF_DOCUMENT_TOKEN_TO_BE_REPLACED

Posted on November 28, 2015 by Justin Kern Leave a comment

Lucama, NC – Day two is alive and well here at Southern National Motorsports Park for the 15th running of the Thanksgiving All-Star Classic. Can tell you two things: 1. There is no shortage of cars in any division. 2. There are no shortages of divisions running today! If you are a race fan there should be no reason why you are not here in the stands. Lets break this down for you, two Late Model Stock Car heats that will ultimately set the field for Sunday’s 200-lap feature. A 25-lap Legends race feature over twenty-five drivers and up to $900 of prize/bounty money to take home! A 50-lap Mini Stock feature and finally a 75-lap Limited Late Model race to cap the evening off.

2015 and 3-Time National Champion Lee Pulliam set the pace and set it early this morning in practice. Posting a quick time of 15.503 in just his fifth lap. For a race that has slipped through the grasp of Pulliam this year would mean something extra special for the Alton, Virginia driver. Not only would it make Pulliam a LMSC Grand Slam winner (winning all four of the regions biggest LMSC races – Hampton Heat, MB400, Martinsville, All-Star Classic), the win would mean so much more the team and family given all that has happened the past week with his family.

Pulliam will look to pilot his Kiker Tree Services number five machine to the pole later this after noon to set himself up for great track position in the heat races. Speaking of heat races, there has been just a little change. Instead of the top 15 in qualifying being locked into the show, every car will participate in the heat race and that will set the field for Sunday’s big show. Tommy Lemons, Jr., Nick Smith, Myatt Snider, and Bradley McCaskill the top five in practice.

END_OF_DOCUMENT_TOKEN_TO_BE_REPLACED

Posted on November 28, 2015 by Justin Kern Leave a comment 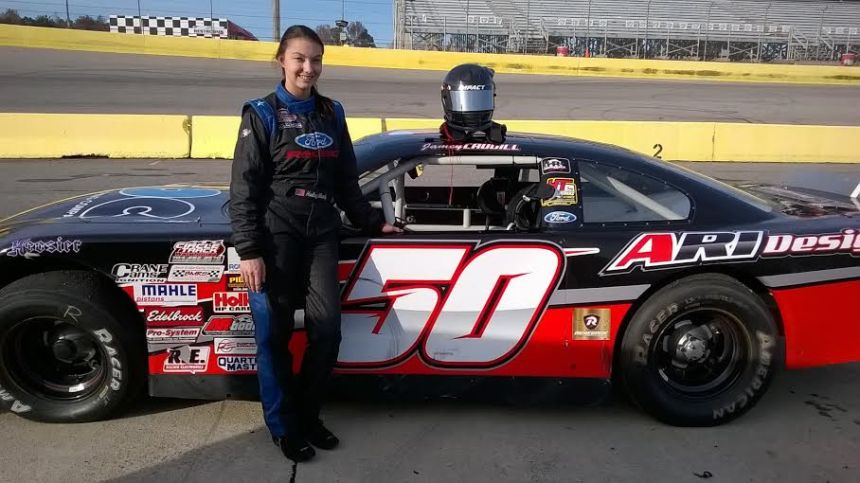 After running two seasons in a Limited Late Model, Haley Moody is making the step up to a Late Model Stock Car in Sunday’s Thanksgiving All-Star Classic.

The 20-year-old from Kinston, North Carolina will be racing Jamey Caudill’s Late Model Stock Car in the 200 lap feature at Southern National Motorsports Park, the longest race Moody has entered in her career. The race will be her first in one of the heavier, higher horsepower Late Model Stock Cars and the 2014 Limited Late Model champion respects the differences.

“It’s different from my car in many ways,” Moody said. “It’s fast. I have to be more careful about tire wear, stuff like that. I think it’s going to be a tough race for sure.”

While Moody already respects the challenges ahead of her, she is also in need of a strong showing on Sunday. The success she enjoyed in 2014, which was capped off with a championship at Southern National, has not been duplicated in 2015. She had three wins in 2014 but has only scored two top-five finishes in 2015 and, most recently, has been involved in accidents in her last three starts.

END_OF_DOCUMENT_TOKEN_TO_BE_REPLACED

Posted on November 27, 2015 by Justin Kern Leave a comment 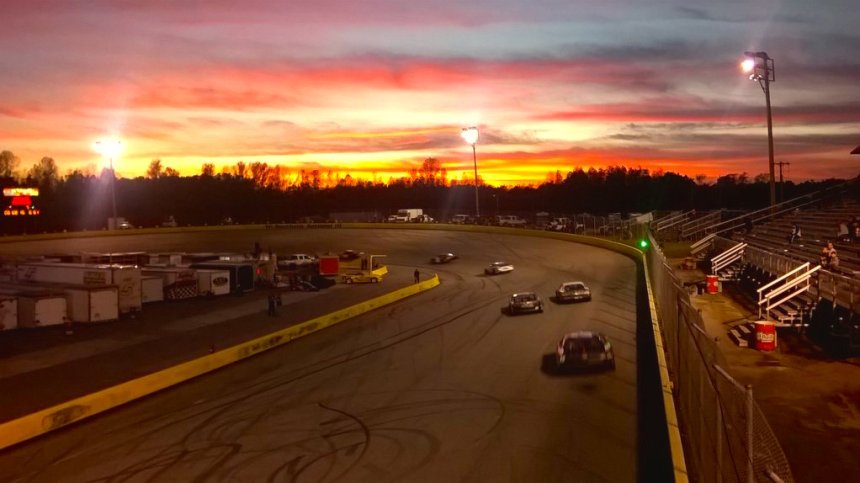 Now that everyone has had time to digest the pounds of food that we all ate the day before, it was time to get outside and enjoy the beautiful night at Southern National Motor Speedway. Continuing their time honored tradition of hosting its annual “turkey race” – better known as the Thanksgiving All-Star Classic. A three-day, ten-race event to kinda put it all on the table and prove whom the best is. The opening night hosted four division’s – Bandos, Street Stock, Chargers, and Mods – for a total of 145 laps of racing.

Blaise Brinkley lead wire to wire in the 15-lap INEX Bandolaro division after sitting on the pole. Picking up in similar fashion at the Classic as he has in the past at Southern National, this win however, did not come as easy as those in the past. Cole Bruce, a regular competitor in the Bando division at Langley Speedway, made sure that Brinkley did not get to far ahead of him for the entirety of the race. Only falling back as much as five car lengths at any given time. Lap traffic did almost play in the favor of Bruce as it allowed him to close on the rear nerf bar of Brinkley as the laps wined down. Was a little bit to late though, Brinkley cruised to the victory and the pay day; winning all the money on the table – Pole Award, Halfway Award, as well as the winners purse.