Posted on August 9, 2015 by Justin Kern Leave a comment 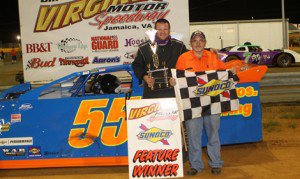 The speedway also collected an estimated 5,000 pounds of food for FeedMore which operates the food bank.

Duncan grab the lead on the opening lap and pulled away while the field battled for second on back. A caution on lap 22 erased a huge lead and set up a three lap dash for the win between Duncan and Walker Arthur. Arthur tried several times to get inside Duncan but Duncan was up to the challenge and went on to score his career first Aaron’s Pro Late Model win.

“We have worked so hard to get here in victory lane in this division; the competition is so tough that it just makes this win that much sweeter,” said Duncan in victory lane.

In other action Justin Williams picked up his third Victory Lap Late Model win of the season. In the Budweiser Modified division Matt Quade caused the first caution went to the rear and then made the winning pass on lap 22 to score his fifth win of the season. In the Truckin Thunder Sportsman Brett Adkins picked up the win in a caution field feature. And in the Collision One Limited Stock division James Givens took the lead from Ryan Hutchens on lap 14 and went on to score his fourth win in a row.

Jimmy Duncan and Corey Almond led the Aaron’s Pro Late Model division to green with Duncan grabbing the lead out of turn two. Behind him the battle for second went three wide between Ricky Wells, Walker Arthur and Davis Lipscombe with Arthur taking over the second spot. On lap 21 Arthur began his assault on the top spot but Duncan was able to hold off every challenge.

A caution on lap 22 set up a three lap dash for the win. On the restart Duncan got a good start but Arthur worked back to his inside. Each time Duncan was able to hold Arthur off and went on to score his career first win in the division. Rounding out the top five were Arthur, Lipscombe, fast qualifier Tyler Bare and Ricky Wells.

In the Victory Lap Late Model 30 lap feature current point leader and defending champion used a daring pass on the opening lap to take the lead and go on to take his third win of the season. On the drop of the green flag Williams made it three wide in turn one with Billy Hubbard and David Williams. Once out front Justin Williams pulled away while David Williams and Walker Arthur put on a great battle for second. Williams would go on to win his third race of the season and second in a row. Rounding out the top five were David Williams, Walker Arthur, Michael Batten and Stephen Childress.

In the Budweiser Modified 25 lap feature defending champion Matt Quade took the lead from race leader Brent Bordeaux with a pass out of turn four on lap 22 and went on to score his fifth win of the season. Quade’s win did not come easy as he caused the races first caution wrecking in turn one.

After going to the rear Quade picked off cars one by one making his front making into the top five with nine laps to go. For the next five laps Qaude worked the back of Bordeaux for the lead finally taking it on lap 22. Quade would then cruise to the win. Rounding out the top five were Bordeaux, Mike Reynolds, Hunter McClendon and Joey Polevoy.

In the Truckin Thunder Sportsman 20 lap feature Brett Adkins took the lead from Matt Ashworth on lap 14 and went on to win the caution filled event. Timmy Brann and Ashworth led the field to green with Ashworth taking over the top spot out of turn two. With Ashworth out front a three wide battle for second between Brann, Tim Shelton and Adkins heated up.

When it was all said and done Adkins had control of second and set out to reel in Ashworth. On lap 14 Adkins powered inside Ashworth down the backstretch to take over the lead and then went on to his third win of the season and second in a row. Rounding out the top five were Jeremiah Marshall, Roger Jamerson, Tim Shelton and Troy Doggett.

In the Collision One Limited Stock Car 20 lap feature David Bowler and Chad Champion led the field to green with Champion taking the lead on the opening circuit. Behind Champion Brian Bradley, Ryan Hutchens and James Givens joined the battle for the lead the four drivers went four wide on several occasions. On lap 7 Ryan Hutchens got by to take the lead with Bradley and Givens in tow.

On lap 12 Givens got under Bradley in turn 4 for second and set out for Hutchens. On lap 14 got inside Hutchens in turn three and took the lead at the line. Once out front Givens was able to motor to his fourth win in a row. Rounding out the top five were Hutchens, Cory Bradley, Marty Coltrain and Chad Champion.