Driver Series: S02E019 – Cameron Bowen Invites Us Into His Life For A Special Look Around

2012 marked the beginning of this journey for Cameron Bowen, a journey who’s finish line is somewhere in the ranks of the Cup Series garage. Bowen’s first adventure behind the wheel of a Bandolero was at Langley Speedway. Winning Rookie of the Year honors and finished third in points his first year out. Bowen would bring home a win in his Bando the following year during the INEX qualifier along with plenty of top three finishes. “I would of won the championship,” Bowen said during our interview. “Had car issues and couldn’t race the last race so we ended up finishing third again.” Bowen has also competed up towards the front at other tracks in the region like Southern National & Orange County.

After that the Bowens set their eyes on Late Model Stock racing as that was Cameron’s dream after all – stock car racing. “My Dad went down to North Carolina and bought an old Late Model,” Bowen said. “We practiced it for a couple months and figured out we didn’t know much at all about Late Models and the car was very outdated.” They met local Xfinity team owner Rick Gdovic during an open practice one night and from then on he at the PPM team has helped Cameron on his Rookie of the Year contending season. “We’ve have solid finishes all year and a great car,” Bowen expressed. “I’d also like to thank Shawn Ballouzzo as he’s been one of my mentors ever since Bando’s!”

Bowen talked more about the difficulties from jumping right from a Bando to a Late Model citing mostly car control and learning how to drive the car in general. “A Bando, especially at Langley, are just like the cup cars at Daytona,” says Bowen. “You just hold the gas and go, no letting off. Driving a Late Model has to be one of the most fun things I’ve ever done. Every straightway mashing the throttle and then getting on the brake to make sure you keep it down on the line every lap is an amazing feeling, I’m just hoping to master it one day like the greats – Greg Edwards, Shawn Ballouzzo, Mark Wertz , Casey Wyatt, etc – of Langley do!”

END_OF_DOCUMENT_TOKEN_TO_BE_REPLACED

Queen On Track To Emulate 2014 Edition Of Ryan Newman

The NASCAR Sprint Cup Series saw yet another overhaul of the Chase for the Cup format, a system that has been in place since 2004, NASCAR’s version of the playoff system. 2014 saw an introduction to an elimination element of the Chase. Stating that a Win in the regular season guarantees your spot in the play-offs, AND guarantees your advancement once the play-offs were in full swing. A system officials were saying would force teams to fight for wins even harder, certainly making winning a premium in the league.

Well, Ryan Newman, a graduate of Purdue University with a B.S in Engineering, decided to be the outlier in NASCAR’s intricate championship formula. Newman not only made it into the Chase without earning a win in 2014, he was also able to make it to the final Championship round (Harvick, Newman, Hamlin, Logano), where if Harvick had not won, by the way they finished that race, Newman would have been crowned the 2014 NASCAR Sprint Cup Champion with his second place finish.

Old Dominion University freshman Brenden Queen, still in fact has a mathematical chance to be the Langley Speedway version of Ryan Newman. Queen, who currently sits third in the LMSC points standing behind Danny Edwards, Jr and brother Greg Edwards, certainly has a legit chance at winning a track championship without winning a single race this season. Now I say that very lightly because a trip to victory lane is something Queen has been striving for all season, though he has come up just a bit short that does not discredit any of his finishes this year but, consistency has kept him where he sits now.

END_OF_DOCUMENT_TOKEN_TO_BE_REPLACED 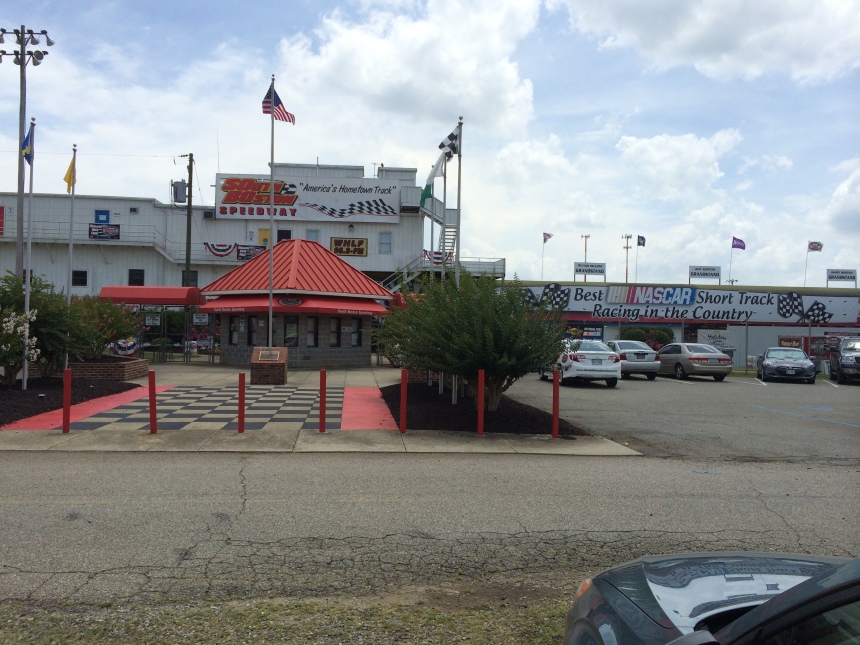 South Boston, VA – With Mother Nature not cooperating the first time around, we look to this weekend for SoBo’s leg of the VA Triple Crown Trilogy. 200 laps are on deck for the NASCAR Whelen All-American Series Late Model Stock cars with up to $5,000 to the winner. Looking for some of the best drivers in the Mid-Atlantic region to converge on the historic 4/10th mile banked oval. Only problem… two other local tracks and one major touring series will also be running that day.

A decision not made lightly by Cathy Rice, South Boston Speedway promoter. “As a promoter for the speedway we did look into the other events that would be happening the weekend of August 29,” Rice said. “We also had to take in to consideration our schedule and what date worked best for us.   August 29 was the only available date for us to make up the July 3rd event and unfortunately for us Langley Speedway and the CARS Tour are running that night as well.” Rice did also tell us that she hates to put the competitors in the position to make a choice on where to compete that weekend. They are still hoping for a solid car count.

END_OF_DOCUMENT_TOKEN_TO_BE_REPLACED

Robersonville, NC – We slowly inch closer and closer to the end of the regular season of a lot of the tracks in the Mid-Atlantic region we are also slowly going to get our first look at 2015 track champions. This past week we got to meet our first 2015 Track Champion after a pair of 20-lap features in the IMCA style Modifieds.

The night’s first 20-lap dash was set earlier in the evening with two lap, single car time trials. Mike Rudy had the strongest car earning the pole and the honor to lead the field into one for race one! What ever set up the crew had on the car was good enough to go wire to wire and win the first race. The win was his first of the season and helped catapult him into the second position in the point’s standings.

With ECMS not using an invert for their twin events Rudy say on the pole yet again for the second race and looked pretty decent to grab another win. Things were also a bit more interesting in race number as they usually are. The 20 of Chris Humblet made pretty hard contact with the 48 crumpling up the right rear panel and jerking the wheel from his hand. Still working on recovering from an injury to the wrist and ribs, Balluzzo was forced to give a few spots up. Once able to gather things back up he mounted a charge for the lead. “We were faster in both races,” Balluzzo said in the week following. “Much faster in the second race though. I caught him and passed him [Rudy] that lap and pulled away. We just started to ride after we got ahead.” The win was Balluzzo’s third of the season at East Carolina Motor Speedway and help solidify the 2015 points championship.

END_OF_DOCUMENT_TOKEN_TO_BE_REPLACED 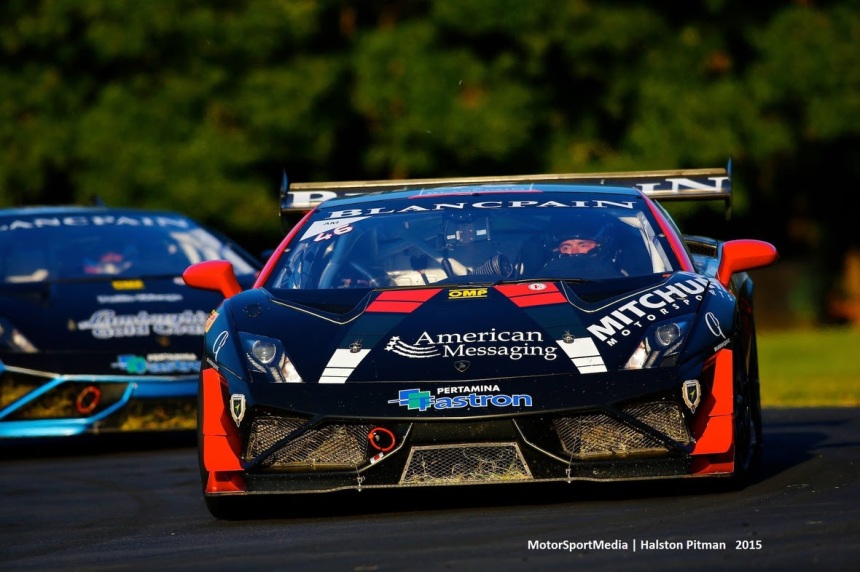 Danville, VA. – Coming off his impressive NASCAR Xfinity Series finish at Watkins Glen International earlier this month, Brandon Gdovic took charge of the podium at Virginia International Raceway over the weekend. The 23-year-old driver from Yorktown, Va. finished 1st in Rounds 4 and 5, then finished 2nd in Round 6 of the Lamborghini Blancpain Super Trofeo Series Gallardo AM division. It was Gdovic’s first career start at the venerable 17-turn, 3.27-mile road circuit near the Virginia-North Carolina state line. His No. 46 Lamborghini Gallardo was fielded by Mitchum Motorsports of Virginia Beach, Va., and sponsored by American Messaging, LLC and ComServe Verizon Wireless.

A drive-through penalty after a slight pit crew miscue kept Gdovic from winning Round 6 and thus sweeping the weekend. After the costly penalty, he relentlessly cut the deficit on the leader to fewer than five seconds before running out of laps. The weekend’s two victories and runner-up finish at VIR moved Gdovic into a tie with defending World Champion Jake Rattenbury for 2nd-place in the Gallardo division point standings.