We have featured this driver, and talked about the young man behind the #58 LMSC quite a few times in the recent months here on The Weekly Racer. Each time its because is ability to make something out of almost nothing. Twice now Ankrum has proved himself worthy of our Hard Charger Award – given to a driver typically in our Touring Series events that has pushed through the field the most. We thought what better time than to bring you a little closer to this west coast sensation! Oh and you can mark my words – this young man by the name of Tyler Ankrum is going to be the next best thing!

Speaking of which, this was something Ankrum pointed out to me as one of his biggest accomplishments. In 2013 Tyler became the first USAC guarter midget driver to win four (4) national titles in one year. “My biggest accomplishment in my quarter midget career was in 2013 I became the first USAC quarter midget driver to win 4 National Championships in one year,” said Ankrum. “You were only allowed to run 4 cars in 4 different classes, and I currently still hold the record.”

After graduating from the ranks of quarter midgets Ankrum ran about five races in an HPD Midget collecting three top fives and two top tens before making the move to Late Model Stock Cars. 2014 was Ankrum’s first year in a Late Model and it did not take him long to find success either. Grabbing his first victory at Caraway Speedway in September, almost stealing a win at Langley Speedway in his second appearance and winning the 2014 Virginia State Rookie of the Year award. So Far Ankrum has proven to be a force charging from the rear of the field in the inaugural CARS Tour LMSC race. He has also told us he will be running for that championship as well as hunting for wins on the NWAAS circuit.

That was the last movie you have seen?

Last movie I saw was the Kingsmen and Wedding Ringer.

If NASCAR approached you and gave you a team of engineers, contractors and a pretty large budget and asked you to design them a new track for the circuit. What would you design?

If NASCAR gave me a lump some of money to build a race track, I would build a half mile tri-oval with minimum banking like Langley Speedway. A drivers track. Short track racing always puts on a great show for the fans.

If you could pick between these two options which would you choice; Free gas for a year OR an all expense paid week long vacation with one person to any place you want to go?

Without a doubt, free gas for a year, because it gets  SUPER expensive traveling as much as we do racing. 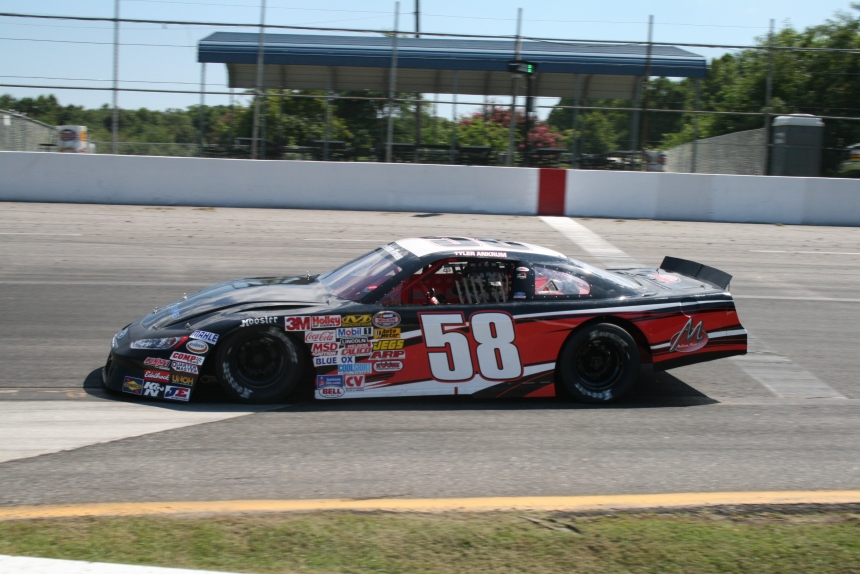 With racing being an obvious hobby, what are some other things you like to do away from the track.

While many consider racing a hobby at this level of Late Model Stock Racing, I take racing seriously. My efforts that I put fourth into learning all I can about Late Model Stock Cars and perfecting my driving skills is a full time job outside of school. I hope it pays off in a long career. On my off time I enjoy, riding quads shootings guns, and snowboarding, hanging out with my family and friends.

Do you have any phobias?

I can’t stand spiders, they freak me out!

What is your favorite thing to eat?

Have you ever been out of the country? If so where have you been, if not where would you like to go?

I have been to Canada. However, I would love to go to Europe and race a Formula 3 Racecar.

Do you own any pets?

Our family pet is a Chocolate Lab named Jack.

What would be your dream job?

My dream job and life’s goal is to drive in the NASCAR Sprint Cup Series.

What is the go to “midnight snack” for Tyler Ankrum?

Special thanks to the following;