Hampton, VA – Mother nature dealt a pretty nice hand this past weekend as our friends from NASCAR dropped by. Even with the Whelen Southern Modified Tour in town that did not take away from the fact we still had some local divisions to kick off their seasons. The Rhonnda Claiborne Champ Karts, Butterfoss & Barton Super Streets and the KeesVacation.com Pro Six were all ready to kick their season off. In addition, the Pepsi Grandstock made their return after a thrilling ending just a week ago that took the top two out coming to the white flag.

If you like pack racing, high-speed drafting, and hoping you have enough friends come drop of the green flag, then this division is for you! 21 karts took to the speedway to open their Pandora’s box of a season with long time veteran Harry Leach leading the way. Leach was able to grab the pole earlier in the afternoon with their “Euroish” type qualifying. The lone female in the pack of hungry wolves was able to pilot her #39 machine to the outside pole – which I believe was her highest starting position of her Wing Champ Kart career.

Aaron Leach would have been your third place starter on the evening but had to pull his machine down pit road before the green flag was even displayed. Crew-members were seen trying to pull his power plant to life but were not having any luck, he was unable to rejoin the field in time. Was certainly not a night for the Leache’s, just a few laps Harry found himself in trouble off two and had to relinquish the lead to the #49 of Brandon Lorah followed by his brother Charlie, behind them the tandem of Jackson Jr & Roberts running third and fourth with Shawn Gervais running fifth – for now.

It didn’t take long for that to change though, just about the time I looked back to turn four from the score board Gervais had spun up the track – and because it takes a while for the karts to get around the track officials try not to throw a yellow unless it’s a bad wreck. This allowed Ryan Hudgins in the #33 kart to take over the fifth position for a moment before losing that to the #39 of Mattisen Morrill. Looking back up front to the Lorah brothers running first and second with Jackson Jr behind them it came down to the final turn on the final lap when Jackson ducked low to try and make a pass, but with the two hooked up rail to rail it was not enough and Brandon Lorah would hold on to take the win. 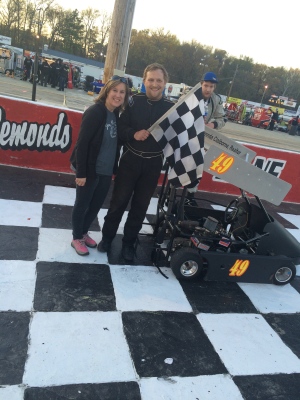 Kicking off their 2015 campaign Landon Abbott was able to grab the pole during their Euro style qualifying earlier that afternoon as well. Guess with such special guest such as the Whelen Mods, the Langley Speedway officials wanted to make sure the night stayed on schedule. Abbott would have the honor of having his teammate #01 Reno Marchetti start to his outside, #12 Shawn Callway, #21 Randy Aker, and defending 2014 track champ #24 of Sammy Gaita would round out the starting five.

In a race that saw just a single caution, the #47 of Craig Warren looked to spin out by all alone and leave a pool of fluid at the entry to road. With no damage to the car and no debris on the racing surface, needless to say it was a pretty quick caution. Before the field was slowed up Abbott had built lets call it a comfortable to car lead of the #01 machine but by no means in the clear. The top five never separated farther than, I want to say three cars!

With the cone rule in full effect again this season, Gaita decided to try his luck on the outside for the restart with 19 laps to go on the board. He was able to hold on pretty strong but was eventually shuffled back to the fourth spot with Marchetti & Akers being nose to tail.

Things started really heating up with just 10 to go. Marchetti was all over the bumper of Abbott like white on rice, paper plate… yeah you get it. Oh lets not forget Randy Akers in the catbird seat waiting to see what happens. Though I would say any other night that would be a darn good place to be in the super street division but with it being opening night and a long season every played nice which allowed Abbott to lead wire-to-wire and grab the first victory of 2015. 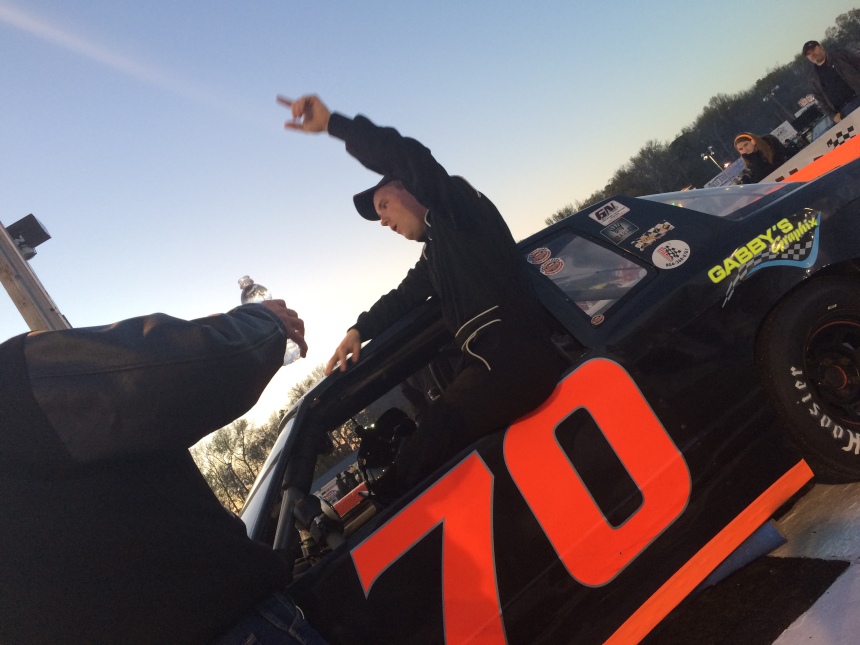 Keeping with the Opening Night: Part 2 theme nine Pro Six cars took the green flag – Maddy was unable to present her car to the grid after suffering extensive front end damage during their euro qualifying. Was glad to see she was physically okay! I can only imagine the emotions however, working hard all off-season to miss the first race.

Bobby Hall – the defending track champion – was able to pick up where he left off in 2014. In a 30-lap race that did not see the yellow flag once, Hall was practically able to hit the cruise control button and sail away for his second consecutive win, of course over a two season period. Landon Florian would fall into the second spot while Travis Wall hunted them in third. Cody Carlton would have to settle for the fourth position with J.B Sipe running a solid fifth.

However the fourth and fifth spots would change hands late in the race when Carlton had a huge slide off turn four. He was able to collect the car in time and not hit the wall but it was just enough to allow Sipe to motor by, and not enough laps for him to make it up.

I want to go on record here and say this now, the Pro Six division will be the division to watch this year. I know it may be hard to believe now but this was only race one! I am interested to see the rivalry between Hall/Carlton grow this season, I am interested in seeing how Justin Fuller, who dominated the UCAR division as a Rookie last year handles not just more power on the right foot but rear wheel drive, purpose built race cars. Then you have the ladies! Maddy, working her Sophomore season – Angelamarie, in her rookie season up front karts. Both woman hungry to prove they belong, neither willing to give up! Mark my word, some great racing to come from this division.

The only division on the fight card to have run a race this season, however, some more regulars have worked their way out of the garage after finishing the cars up. Last week we saw a thrilling battle between defending champ Mark Frye & Tommy Sweeny – seems like the best races are always the ones we don’t cover – that ultimately ended with both wrecking down the back stretch and having to restart in the rear of the field. This allowed Brandon Hinson to snag the victory away from a hard charging Andrew Condrey.

This evening the two started nose to tail, Frye claiming yet another pole, Sweeny able to start in the third position. The green flag was displayed to the field and Frye was able to clear the second place starter of Jamie Sample out of turn two which left the door open for Sweeny to follow suit but it would not last long. Sample was able to execute a pretty clean bump and run pass that moved Sweeny up the track and allowed for him to take the second position back. It also allowed for Brandon Hinson – who had to start shotgun after missing qualifying due to a broken rear end – to grab the third spot after rocketing his way through the pack on the initial start.

With Hinson tracking down and passing Sample he set his eyes on the leader and was slowly reeling him in! Other than Hinson tracking Frye down some of the best racing came from the fifth spot as it changed hands several times between Michael Waters & Thomas Marks (both missing the first race of the season) but that battle would be put on pause after the #5 of Jonathan White would come to a halt in turn four after spinning down the back stretch.

This would open Pandora’s box yet again – what I mean is it allowed for Sweeny to cool the tires and try his luck on the outside with the help of the cone. As the field came out of four to get the green flag leader Mark Frye got an incredible jump, Sweeny not so much. After battling on the outside four ¾ of a lap the #11 machine went for a spin to bring out the yellow again and eliminating his chance to take the cone.

This would move Thomas Marks to fourth and Michael Waters to fifth (he would eventually take the cone) for the ensuing restart. Once the green flag was displaced Frye and Hinson both dropped the hammer, both getting a good jump on the field and setting up what would be a good run to the finish. Hinson would run Frye down in the final five or so laps but just did not have enough to set up a pass, Mark Frye would come home your victor, Hinson would have to settle with his second consecutive top two finish.